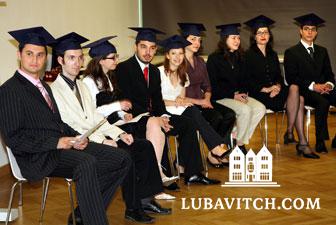 Students of the Lauder Jewish Leadership Program who graduated the JLI track.

It was developed as an educational program that would provide adults in Jewish communities the essentials of Jewish literacy. Since its establishment several years ago, the Rohr JLI (Jewish Learning Institute) has become the largest adult learning program of its kind, operating multi-lingually in over 200 cities and around the world.

Now, one university, the Lauder Business School in Vienna has integrated the JLI track into its Jewish Leadership Program, with 80 of its students having recently completed the course..

The students, an international group from Austria, Russia, Hungary, Bulgaria and other countries training at the Jewish Leadership Program, a unique academic program that offers high achieving students the opportunity to earn an EU degree in applied sciences or business education, also participate in a double concentration on Jewish philosophy and ethics.

Led by Rabbi Shaya Boas and instructed by a team of JLI-trained teachers, 20 of the students studied JLI’s course “From Sinai to Cyberspace” during the twice-weekly, two-hour sessions.  Student assignments and exams were part of the curriculum and at the recent graduation ceremony, diplomas were issued to the students with an 80% passing grade.

The course was a real eye-opener for the students, says Rabbi Boas. “Many of them were under the impression that the level of sophistication in Jewish learning is similar to the rather primitive theology in other religions. They did not just gain knowledge; they gained respect and honor towards Jewish studies.  This along with other factors led to an actual increase in practical Mitzvos.”

The university has also successfully taught JLI’s “You be the Judge” course and plans to offer its students two more JLI courses in the upcoming fall semester.