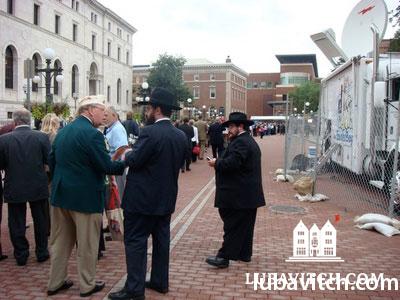 At the RNC, Chabad rabbis hit the streets of St. Paul.

(lubavitch.com) The streets of St. Paul this week are filled with both convention participants and protestors. Whoever they are, says Chabad representative Rabbi Mendel Feller, “We are here to serve them.”

“Our goal is to reach out to Jews who come for whatever reason and of whatever affiliation,” stresses Feller. “Lubavitch was active in Denver for the Democratic convention as well.”

The Republican National Convention is creating quite a stir in this otherwise docile capital city. Back in Minnesota for the first time since 1892, the RNC has the city hopping. Over 100 hotels are filled with 45,000 delegates, reporters, and guests who are sprouting as fast as late-season tomatoes. The months of planning by city and party officials are paying off, with visitors sampling the state’s finest in food, entertainment, and hospitality.

For kosher consumers who can’t grab a nosh at Xcel Energy Center’s food stands or for those who need to pray with a minyan, Chabad is prepared. And judging by the kippahs seen throughout the audience, the local Chabad outpost is busy this week.

The newly-renovated Lubavitch House, near the hub of downtown, is hosting scores of people. Visitors come for meals and kosher box-lunches. Rabbi Feller and other representatives are serving as a Jewish information center, directing visitors to kosher restaurants, shuls, and answering “questions of all things Jewish.” Chabad Rabbis are also busy on the convention floor “promoting issues of importance to Jewish people,” says Feller.

It is not only members of the public on the receiving end of Chabad goodwill. A uniformed Rabbi Meir Rubinfeld has hit the streets as chaplain of the St. Paul Police force. Rubinfeld is there to minister to the Jewish officers (there are five in St. Paul) and the non-Jewish. Throughout the year, his duties include running patrols with police officers; providing counseling to the force; and being available to them whatever the need.

This week has seen an excess of both good and bad. While delegates convened Monday, police arrested almost 300 protesters. Though the numbers have decreased significantly as the week wore on, the police force has been kept busy.

“One of the cops I am close with worked a 23-hour shift yesterday,” says Rubinfeld. Rubinfeld has reached out to exhausted officers with cold drinks and hot food, helping them “forget the tension for a few minutes and relax.”

The chaplain mans a respite center for the 3,000 police officers in town. Many of the nation’s finest have enjoyed making the rabbi’s friendship, and say they plan to keep in touch with him when they return home.

“They love it that I am here to take care of them,” says Rubinfeld.

“That’s really what it is all about,” adds Feller.

“Lubavitch is apolitical, but we are here because there are Jews who need us, in many different ways.”