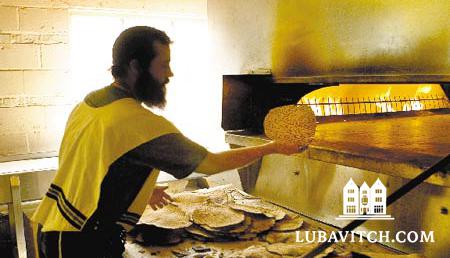 (lubavitch.com) They are relics of the past, certainly, but handmade matzahs have made a comeback.

Until the last few decades, they were available only at select Judaica shops or in Brooklyn storefronts. These days, the crispy confections can be had at more than 200 major supermarket chains across the country and via specialized websites. In all, an estimated million and a half pounds of handmade matzah will be crunched this Pesach.

Though Chanukah latkes are barely out of the oil, brick ovens are long fired up in order to fill quotas by Pesach’s start in late March. This year’s wheat was harvested in June, and ground soon after. Baking began in November.

Interest in handmade matzah has seen a steady rise, with sales mounting approximately eight percent annually. (Last spring, due to the economy, sales did not grow, but remained steady.) The market’s expansion, says wholesaler Rabbi Yossi Frimerman, is thanks largely to Chabad.

“Chabad has created communities in distant areas, creating an interest in kosher and matzah,” Frimerman says. “And that has gotten the attention of the big supermarkets.”

The Brooklyn-based wholesaler introduced handmade “shmurah” matzah onto store shelves in North America. His customers are some of the biggest boys in the industry, including Pathmark, Shoprite, and Albertsons. And while he does not own his own bakery (his supply comes from bakeries in Ukraine, Israel, and the United States), Frimerman is the world’s largest distributor of handmade shmurah matzah.

“Shmurah” matzah is produced from flour guarded since harvest. It comes in handmade and machine varieties: round, handmade matzah is as close as you can get to the original version the Jewish people prepared as they fled Egypt 3,322 years ago. The process is pretty ancient as well. Flour and water are kneaded. The dough is then rolled out and perforated. The disks lifted onto a wooden stick and placed in a 1,300 degree oven where they are baked for about a minute.

Yitzchak Tenenbaum is intimately involved in the process much of the year. As owner of the Crown Heights Matzah Bakery, he spends his days surrounded by hot ovens and boxes of matzah. The product’s current popularity, he believes, is influenced by the Lubavitcher Rebbe’s matzah initiative some 50 years ago. “He wanted people to use the traditional, round, handmade matzah,” he says, recalling that the Rebbe distributed shmurah matzah to visitors on the afternoon before Passover. “The Rebbe’s insistence on shmurah matzah brought a huge awareness.”

Matzah, referred to reverently as the “bread of the poor man,” comes with a hefty price tag. A pound of matzah (which usually contains seven or eight whole spheres) costs approximately 20 dollars. Specialty varieties, including spelt and gluten-free oat, can cost more than 30 dollars per pound. Modern customers are “much more health conscious and expect everything that can be made kosher to be kosher,” says kosher food consultant Menachem Lubinsky. The figures, though high, are only a minute percentage of the more than 1.5 billion dollar Pesach industry.

Despite the expense, Frimerman sees more and more people buying handmade, at least for the seder nights. “They are trying to mimic what our ancestors did,” he muses. “They may buy five pounds of machine matzah, but now they are adding on a pound or two of handmade.”

When Rabbi Shlomo Bendet began selling matzah 20 years ago, few in the Minnesota community understood his product. Today he sells to a broad range of customers, including non-religious clientele; supermarkets also purchase his imported matzahs. Contemporary Jews, he says, “are more knowledgeable about shmurah matzah. I think they want to do it right.” By now, his sales have nearly doubled (from 500 to 900 pounds annually) and his business has local competition.

People “have a sense that handmade matzah, like home-made challah, is somehow more authentic, less ‘industrial,’ and more ‘natural,’” explains Brandeis Professor Dr. Jonathan Sarna. “They like the fact that each matzah is distinctive and lovingly produced by hand.”

The noted American Jewish historian lectures widely about the development of matzah in this country, particularly about the Manischewitz family. And even as he says we should be grateful for the affordability and availability of machine matzah, “we should be glad that the more ancient tradition of handmade (shmurah) matzah is also preserved.”