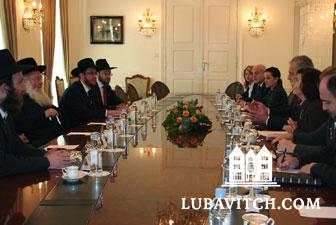 Members of the Rabbinical Centre of Europe meet with Croatian leaders.

Zaklos was part of delegation from the Rabbinical Centre of Europe that arrived in Zagreb to seek a change in Croatia’s law regarding the selling of cemetery land.

Presently, Croatian law allows for the dead who have no heirs, to be disinterred and reburied after 30 years, should the owners of the cemetery land want to resell it.

Following deliberations with members of the RCE, facilitated with the help of Rabbi Levi Matusof, a liason with the EU, the Prime Minister agreed to implement the change in law after assurances by Rabbi Yitzchok Schochet that the RCE will assume full responsibility for this matter. Prime Minister Sanader was in Brussels last week to accelerate Croatia's accession in the European Union.

The delegation was led by Chief Rabbi of the Orthodox Jewish Community of Geneva, Rabbi Avraham-Yafe Schlesinger who is also Chairman of the Preservation and Restoration of Jewish Cemeteries in Europe; Mill Hill, London's Rabbi Yitzchok Schochet who is also Vice Chairman of the Rabbinical Council of the UK; Rabbi Kotel Da-don, Chief Rabbi of the Beth Israel Jewish Community in Croatia, and Rabbi Pinchos Zaklos, Chabad-Lubavitch representative in Croatia.

During the meeting with Zagreb’s Mayor Milan Bandi, he recalled his recent visit to Israel, followed by the menorah lighting in Zagreb's main square, and spoke warmly of the enthusiastic regards he consistently gets from “many businesspeople, about the activities of Chabad in our city.”

Stjepan Mesi, President of the Republic of Croatia, referred to his good friendship with Chabad’s Rabbi Zaklos beginning with Zaklos’s arrival to Zagreb some three years ago.