Coming Back for Seconds: Friday Nights with Chabad on Campus 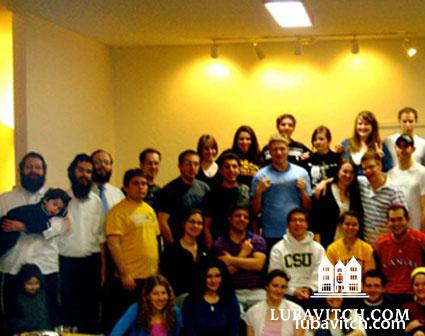 Students with Chabad at Shabbos in the Rockies

(lubavitch.com) They come for the free food. And they come back for everything else.

Students on 340 college campuses worldwide say that a highlight of their (stressful) week is Friday night at the local Chabad. While the current economic crisis is causing some Jewish campus organizations to cut back and charge for their meals, Chabad is continuing to provide the same service, at the same price: free.

“I had never heard of Chabad before Harvard,” says Andrew Obus. “A friend invited me to tag along for dinner at the Rabbi’s house in my sophomore year, so I went.” He is still going, though now as a PhD student at the University of Pennsylvania. “There are many Jewish organizations on campus, offering classes and Shabbat programs. But Chabad is the only place where you find a homey, spiritual feeling.”

Obus is hoping his peers will get that vibe from this week’s Penn Grad Student Shabbat Dinner. The annual dinner, co-sponsored by Chabad and Hillel, attracts 350 graduate students from 13 different schools. “There are a lot of people who don’t attend other events, and many don’t even know that Chabad exists,” explains Obus. “This could be their only Shabbat dinner this year, but that’s better than nothing, right?”

Rabbi Levi Haskelevich and his wife, Nechama, lead Chabad at the University of Pennsylvania. Typically the couple hosts 50 students each Friday night. But specialty weekends, like the Hawaiian-themed Shabbat following President Obama’s inauguration or the Philly Shabbat after the Phillies won the World Series, shoot their numbers out of the ballpark. “We live in a world where our Blackberries don’t get turned off,” says Haskelevich. “Shabbat allows for cohesiveness and forces us to stop what we are doing and rearrange our priorities.”

“Right now, I am behind on my thesis which is due in two months,” confesses Obus. “Shabbat is my only chance not to think and stress about it.”

Benjamin Lewis, a first-year veterinary student at the University, is a regular at the Haskelevich’s Shabbat services and dinner. “Students are willing to give up a night of partying for the warmth and free food that Chabad offers,” reasons Lewis.

Growing up in a conservative home and attending a Jewish day school all his life, Lewis has plenty of experience doing Shabbat. Still, if not for Chabad’s presence on campus, he says, “I wouldn’t bother doing Kiddush, or having challah, or a proper meal with prayers. Chabad facilitates my observance of Shabbat, allowing me to do things I wouldn’t otherwise do because of laziness or time constraints.”

A widely-touted 2006 study emphasized the significance of Chabad’s campus presence, especially on Friday nights. Researcher Barry Chazan, an education professor at the Hebrew University of Jerusalem, explained that positive Jewish experiences are imperative at a time when students are making occupational and marriage decisions. Chazan concludes that for the 5,000 students who attend each week, the Friday night dinners are not solely about the free food and camaraderie, but a seminal facet of the young Jewish student’s entire feeling towards his religious observance.

“The mainstay of our campus activities is Shabbat,” explains Rabbi Dovid Gurevich of Chabad at the University of California, Los Angeles. The Rabbi and his wife host 30 students each Friday night, but this past weekend saw 600 pass through their doors. Chabad of UCLA celebrated its 40th year on campus, playing host to students from 20 West Coast schools. Gene Ivanov, a third-year chemistry major, helped fund and plan the 6th Annual Intercollegiate West Coast Shabbaton.

“I like the whole Jewish unity thing. I like when a bunch of my fraternity brothers get together for something Jewish. For college students,” continues Ivanov, “Shabbat is our one time to relax. Six days of the week, we work. On the seventh, we live.”

Over 50 Colorado and Kansas students also lived it up this past weekend during their “Shabbat in the Rockies.” University of Colorado Finance major, Rachel Cohen, helped plan the weekend of Shabbat, workshops, and winter sports.

“Basically, I met a guy from University of Kansas named Matt at the big Shabbaton last semester in New York City,” Cohen says. “He is a cool guy and I wanted to see him again. So when I got back to campus, I said, ‘let’s make it happen.’ The Rabbi was totally supportive and we had an amazing time with students from five schools.”

Rabbi Yisroel Wilhelm, Chabad’s representative to the University of Colorado’s Boulder campus, was thrilled with the weekend’s outcome. “We wanted the students to feel the energy, the Jewish pride. They took their Jewish experiences to a whole new level and had a lot of fun.”

Today Cohen is enthusiastic about Jewish pride, but she initially visited her local Chabad for more tangible reasons. “I was so sick of dorm food,” she says. “My friends begged me to come to the Rabbi’s just once and promised I would like it. The Rabbi and Leah were so welcoming. I come from a reform background and it was comforting to see that they respect a Jew as a Jew. It was very refreshing.”

They come at first for the food, and they stay on for better reasons.

Related Articles
View All
Campus
Two Universities React as Antisemitism Steps Out of the Shadows
While college administrators debate the limit of free speech, Chabad campus leaders take action. To Read The Full Magazine Story Log In Subscribe Subscriptions to…
Campus
Popping Bottles With Intention
“I’m still popping bottles, but instead of popping them at a bar or nightclub, it’s at the Shabbat table. It’s the same hustle but with…
Campus
Israeli Minorities Find A Platform at Stanford University Chabad
Less than twenty-four hours before it was due to begin, an event scheduled to take place at Stanford University’s Hillel facility earlier this week was…
Campus
In Irma Aftermath, Campus Chabad Stays Put and Open
"A disaster like Hurricane Irma can be frightening, but it also brings people together and highlights the wonderful community on campus."
Get Inspiration to your inbox!
Newsletter
Join our weekly newsletter for inspiration and updates
Donate
Find Your Local Chabad Center
Subscribe
|
Log In
Chabad
About Chabad-Lubavitch
About Chabad Lubavitch
The Rebbe
Headquarters
Magazine
Magazine
News
News & Updates
In The Media
Impact
Social and Humanitarian
Social and Humanitarian
Education
Education
Community
Community