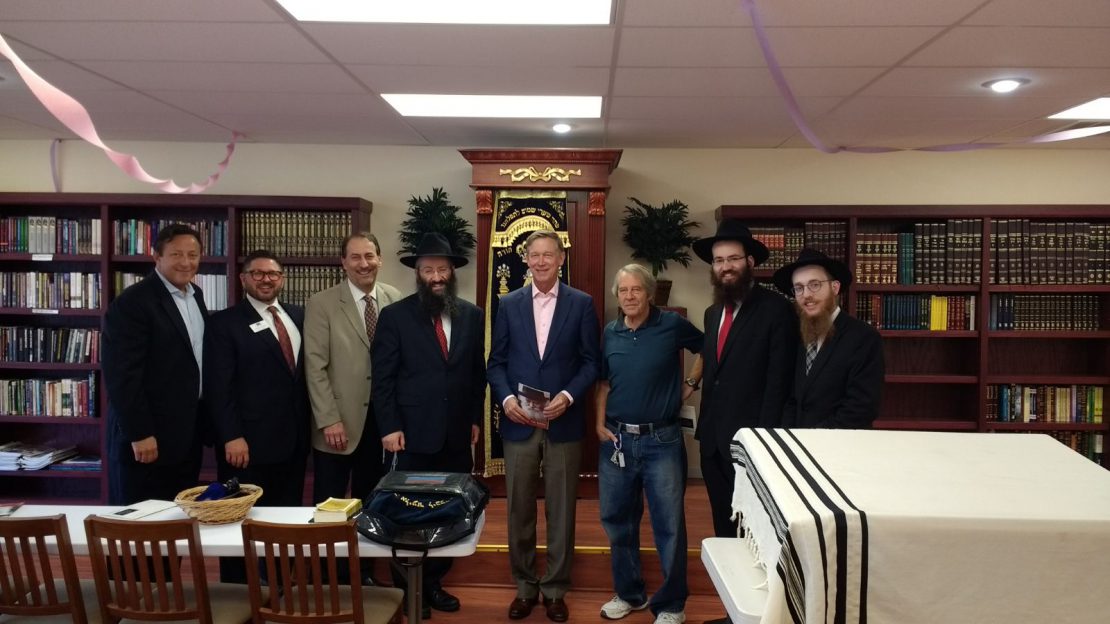 His Thursday, August 10 visit was a response to two separate incidents: on a Friday in mid-June, congregants arrived at the Chabad center to find a “Fight Terror, Nuke Israel” sticker pasted to the glass door. Later, in early August, Swastikas and anti-Semitic messages were spray-painted on Synagogue Temple Beth Torah’s building and welcome sign, as well as on cars, homes, and buildings in the surrounding area.

According to the Jerusalem Post, there has been a significant increase in anti semitic acts in Colorado in the past two years, with eighteen acts of antisemitism reported in the area in 2015 and forty-five last year.

“Instead of hate crimes, we’ll bring acts of love,” Chabad Rabbi Moshe Liberow shared with the governor and his entourage. “I think this will make a big impact.”

Governor Hickenlooper agreed. “I am acutely aware of the challenges all people of faith face at one time or another… you’re exactly right, the way to fight darkness is not with more darkness, but with light,” adding, “people like yourself punch holes in the darkness.”

A statement released by the Governor, mayor, and chief of police declares that “the City of Colorado Springs and State of Colorado are proud of the diversity of our residents . . . The Jewish people are important members of our wonderful and diverse communities. Hate crimes will not be tolerated in Colorado Springs or elsewhere in our beautiful state.”

According to Rabbi Liberow, the attitude toward Jews in the area in general is “extremely respectful;” in fact, he notes, locals from a non-profit group volunteered hours to help out both with cleanup after a fire that destroyed the Chabad House earlier this year, as well as with the setup of the new location.

“It used to be a consignment store,” the rabbi explained during a quick tour of the new center.

“Well,” responded the governor, only half-jokingly, “now it’s a ‘store’ for refining souls.”

To learn more about Chabad of Colorado Springs, visit www.thejewishflame.com.

Related Articles
View All
Chabad of Vail Overturns 1970s Amendment, Establishes Religious Center
Chabad Jewish Center has just purchased a building to be used as its permanent home, overturning a longstanding amendment in the process.
A Community Experience for Jewish Students at CU
This month, Chabad CU will open the doors to a new center that will offer students yet a new and improved experience of Jewish community…
Get Inspiration to your inbox!
Newsletter
Join our weekly newsletter for inspiration and updates
Donate
Find Your Local Chabad Center
Subscribe
|
Log In
Chabad
About Chabad-Lubavitch
About Chabad Lubavitch
The Rebbe
Headquarters
Magazine
Magazine
News
News & Updates
In The Media
Impact
Social and Humanitarian
Social and Humanitarian
Education
Education
Community
Community