A Community Experience for Jewish Students at CU 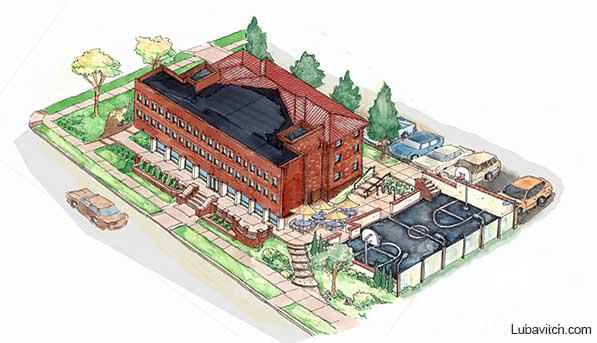 A public university set against the backdrop of snow-capped mountains, the University of Colorado Boulder holds the number one spot nationally for its atomic/molecular/optical physics program. Twenty two hundred of its 30000 students are Jewish, but CU’s distance from major Jewish centers means that Jewish life is less accessible to them.

That makes the Jewish family experience that students find with Rabbi Yisroel and Leah Wilhem a rare commodity on this campus. And this month, Rohr Chabad CU will open the doors to a new center that will offer students yet a new and improved Jewish community life experience.

Nicole Schaeffer has a vested interest in the new Schaeffer Jewish Student Center. When she began her studies at CU in 2003, she was homesick for her native Los Angeles Jewish community. But a year later the Chabad representatives arrived and invited her to Shabbat dinner.

“I felt a connection immediately,” Schaeffer recalled. “Going to Chabad at CU gave me the Jewish identity I needed and wanted. I needed a Jewish home.” The Jewish home she found with the Wilhelm family has since grown, and by 2010, at least 500 students were interfacing with them, making space tight at their lively home.

Wilhelm and his wife Leah thought up their dream plan: “A place where the students could meet up with their friends and feel themselves a part of a community,” Leah told lubavitch.com.

By then, Schaeffer, who graduated in 2011, was no longer on campus. But like other graduates, she was grateful for the Chabad representatives who “changed my life in Boulder,” and remained in close contact with them.

The young graduate appreciated their vision for a new space. “I wanted future generations to have a home so that others won’t feel lost. I want others to experience what I had, but even better,” she says. So she discussed giving back to Chabad with her parents, George Schaeffer and Miriam Schaeffer, who had followed their daughter’s positive relationship with the Wilhelms.

The Schaeffer family joined the Rohr Family Foundation with initial funding of 1.5 million dollars towards the acquisition of a building, and the Wilhelms were beginning to see their vision take hold.

Centrally located in the campus’s popular Hill neighborhood, the 1928 Italianate style building was a sorority. It was modernized and doubled in size in 1965 by a fraternity, and further modified by the University of Colorado as their Economics Institute in 1979. In its new incarnation, the Schaeffer Jewish Student Center that would house all of the Rohr Chabad House programs, would need a gut renovation.

Plans were drafted, zoning permits were sorted out in aprocess that took three years. Last May, parents and students came out to launch the project. Larry Halpern, a CU alumnus and father of past and current CU students, was brimming with anticipation. “We can’t wait to see what the Wilhelms can accomplish in the new Schaeffer Family Student Center,” he told the crowd to rousing applause.

Designed as a space conducive to a comprehensive Jewish community experience for the students, at the center of the new building is a lounge featuring a kosher snack bar, a game area, a multimedia entertainment center, quiet study nooks and plenty of comfortable couches and seating. A kitchen, dining room, study space with a Judaic library, mimics a Jewish home environment. And illuminated basketball and volleyball courts offer students a seamless experience.

“If students begin to see this as their Jewish community, they will become more engaged and involved, participating in Shabbat dinners and in the educational programming we offer here,” Leah Wilhelm says.

Mark Loewenstein, a CU law professor who spent time at the Wilhelms’ home, expects the new center to attract more Jewish students. “We have been over there for Shabbat, for the chagim, and a lot of students are participating in the programs,” he tells lubavitch.com.

“At Chabad they feel a sense of belonging, of being Jewish, of having a connection to the history of the people. The Wilhelms are good at making those connections.”

Related Articles
View All
Chabad at WVU Opens New Space on Campus
Location, location, location. For Chabad of Morgantown, West Virginia, that was at the top of their wish list in their search for a new home.
At Chabad House Bowery, NYU Students Lead
At Chabad House Bowery, NYU's Jewish students get to test their acquired skills and exercise their creative talent towards building a dynamic Jewish community on…
A New Place for Jewish Students at Columbia University
“Chabad has given me confidence,” Ari Goldman told his colleagues last Thursday evening. Speaking at an intimate reception for the launching of the new Chabad…
Beta Fraternity Now Chabad’s New Place at Yale University
Use the preview site to make sure the text you enter here fits.
Campus
Ep. 30: World’s First Chabad on Campus Still Going Strong
The 30th episode in its series about the personal struggles and achievements of Chabad representatives
Campus
After Fire Destroys Delaware Student Center, Chabad Builds Eight Times Bigger
Two years after arson destroyed the Jewish Student Center at the University of Delaware, Rabbi Avremel and Shulie Vogel broke ground on a new center,…
Campus
Jeff Brought Chabad to Guelph, Now It Carries His Name
This July, on Jeff’s yahrzeit, the Dr. Jeff & Lisa White Chabad of Guelph was dedicated in his honor
Campus
Students Surprise Refugees with Busload of Food
Students touring Poland with Chabad on Campus responded to an unexpected chance to assist Ukrainian refugees
Get Inspiration to your inbox!
Newsletter
Join our weekly newsletter for inspiration and updates
Donate
Find Your Local Chabad Center
Subscribe
|
Log In
Chabad
About Chabad-Lubavitch
About Chabad Lubavitch
The Rebbe
Headquarters
Magazine
Magazine
News
News & Updates
In The Media
Impact
Social and Humanitarian
Social and Humanitarian
Education
Education
Community
Community