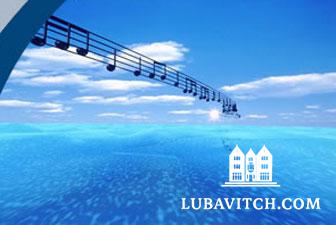 The last few years in mainstream music have seen an explosion of bands influenced by Eastern European melodies and songs. From Jdub Record bands Balkan Beat Box and Golem to indie bands DeVotchKa and Beirut, everything from Roma lautari to klezmer music has been fair game. Recently, though, artists have been finding inspiration from a more mystical source – the niggunim of Chabad Lubavitch.

Artists as diverse as jazz virtuoso Tim Sparks, rockers Soul Farm and roots reggae stars 12 Tribe Sound have found inspiration in the compositions of the Rebbes of Lubavitch.
An iconic image of Chasidic life is a Rebbe surrounded by his followers as they sing a niggun. A niggun, or a "humming tune," is a spiritual song or devotional, frequently without words or lyrics. In some circumstances, the songs are joyous expressions of religious ecstasy. Other times they are slow dirges, designed to send shivers down the spine of the listener. In light of the niggun’s long history, going back to the Baal Shem Tov in the 17th century, its influence on modern musicians is unexpected and exciting.

"When a musician hears a melody that touches a deep chord, they can hear it and sense this is something really authentic," Rabbi Asi Spiegel, Chabad representative from Eugene, Oregon, and a musician himself, explains. "Especially in our time where music has gone so commercial, people are looking for very deep musical outlets."
Such was the case with the talented Tim Sparks, who released At the Rebbe’s Table in 2002 on Tzadik – John Zorn’s record label. The album marks an early beginning for this remarkable trend. Like the best niggunim, Spark’s album is a meditation on the experience of being a physical being in God’s spiritual world. Unlike niggunim, though, Spark’s marries the Chabad tradition to his extensive training as a jazz musician.
"My connection in the beginning was strictly through music, playing in bands for Bar Mitzvahs and weddings. Especially at weddings, I experienced the great feeling of joy, of simcha [happiness]," Sparks told Lubavitch.com. "It seemed to me that the more Orthodox families danced with the most intensity."
Sparks is quick to point out that the seductive nature of niggunim is not merely contextual, but musical as well. "The niggunim have a quality, it’s unique. Especially something about that Freygish mode, the Phrygian scale with a raised 3rd. I like the songs with that sound. It is balanced between sadness and happiness. Bittersweet, soulful."
Rabbi Joseph I. Schneersohn, the sixth Rebbe of Chabad-Lubavitch told about a meeting the first Rebbe of Lubavitch had with his teacher, the Maggid of Mezrich. In that meeting, his teacher told them that his mission would be to spread Chasidic teaching throughout the world, and to use niggunim to do so. Tim Sparks, who is not himself Jewish, says that he heard the call. "Working on this music sparked my interest in Judasim and prompted me to read the Tanakh. I continue to read the Tanakh and this has been a very liberating experience for myself, having been brought up in a Christian culture," he says.
On the flipside of Sparks is Matisyahu, whose musical interests come from the Jamaican reggae culture, and who takes his lyrical cues from textual works of Chasidic writings. Matisyahu became acclaimed last year when his album Youth placed high on the Billboard music charts. On his hit single, King Without a Crown, Matisyahu sang: "And I sing to my G-d songs of love and healing / I Want Mashiach Now so it's time we start revealing." Placed within a rhyme scheme common to reggae music, but foreign to Chasidic culture, Matisyahu rapped about awaiting the Messiah – a fundamental tenet of Jewish belief.
Continuing where Matisyahu left off, the production company that worked on his first album has continued to explore Chabad themes. Daniel Seliger of the group 12 Tribe Sound was responsible for Matisyahu’s renditions of ‘Tzama Lcha Nafshi’ and other niggunim on the reggae-stars first album: Shake Off the Dust . . . Arise. (They actually produced the entire album.) Now he’s involved in a whole new project that emphasizes the niggunim first. The upcoming album Thunda 'Pon The Mountian (Hasidic Reggae Vol. 1), promises a collection of roots/dub reggae interpretations of Chabad Niggunim.
"Niggunim are critical to the whole project," Seliger told Lubavitch.com. Seliger, who says his roots are "the complete opposite of Chabad," fell in love with Chabad niggunim when he began to attend Chabad services. Though himself not a Lubavitcher, he has deep respect for its traditions and the Lubavitcher Rebbe. "The Rebbes were cosmic people so they were great composers too, but it's not what people expect. That Rebbes created such spiritually arousing pieces of music."
"It’s like Shlomo [Carlebach] where after he passed away, there was a sudden revival of his music. It’s a similar phenomenon," Rabbi Spiegel explains, trying to account for the sudden popularity of Chabad music.
Soulfarm would recognize Shlomo Carlebach. As early as 2000 the rock band experienced a surge of popularity when they set Carlebach’s music to a faster beat and harder rhythms. Late last year they released their latest recording, The Chabad Sessions. The album features famous Chabad niggunim like "Didan Notzach," and "Keli Ato." Setting these songs to C Lanzbom’s flurried acoustic finger-picking and Noah Solomon’s soft voice, Soulfarm reinterprets the songs as light folk music – equally inspired by Irish melodies as by the original Chabad sources.
"Music is our art, and it was a sweet challenge to put a spin using our own signature style to these traditional Chabad melodies. In other words, we put our musical influences in to these beautiful melodies," Soulfarm told Lubavitch.com. "Music is magical and it transcends language and crosses and brings together all different cultures."
Soulfarm explained that singer Noah Solomon had attended a Chabad school in Israel where they sang Chabad niggunim on a regular basis, and that guitarist C Lanzbom studied music through Eli Lipsker – who had the privilege of playing for the Lubavitch Rebbe. "We hope to have done the music justice by honoring its integrity and staying true to its roots."
One of the great accomplishments of niggunim is tying people together, a sentiment that Seliger emphasized in his interview with Lubavitch.com. "I love all Jews," he said, and paused for a moment. "And mainly because of their music."