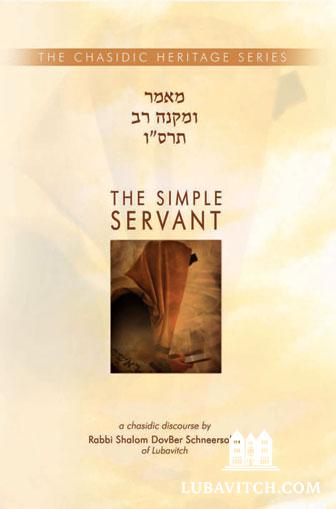 (lubavitch.com) Is there a point to keeping the commandments if their logic is not clear?

A new translation and annotation of a 102-year-old Chabad Chasidic text probes the question.

“When a Jew does a mitzvah today he is doing so not because of any self-oriented motivation. He doesn’t see how the mitzvah is the best thing for him. He doesn’t sense the immense power of the mitzvah and the sweetness and beauty of uniting with G-d through His commandments,” Rabbi Yossi Marcus writes in the overview of U’Mikneh Rav, in English translation, The Simple Servant, the latest Chassidic Heritage Series (CHS) volume released by Kehot Publication Society.

Answering to a divine will that transcends human comprehension comes with its own majesty.  It is not, as is sometimes presumed, just an answer to the uneducated, but spiritually curious individual.

“Every person regardless of whether they are simple or sophisticated has within him a capacity to be simple in the presence of G-d, as part of their service of G-d,” said Rabbi Marcus.

This is one of the points made by the fifth Lubavitcher Rebbe, Rabbi Shalom DovBer Schneersoh n (1860-1920) who conveyed U’Mikneh Rav as part of a larger series. He was building upon ideas first shared by the second Rebbe in the Lubavitch dynasty, and delineating a structure for them, a theme of Rabbi Shalom DovBer’s approach to teaching and leadership.

Today’s spiritual descendants of those first Chabad yeshiva students generally study this discourse, in the original Hebrew, during their freshman year of rabbinical college, because the concepts in this series of discourses demand attentive study to achieve comprehension.

U’Mikneh Rav is considered fundamental to a yeshiva students’ education because it details concepts referenced in many later discourses and talks by later Chabad-Lubavitch Rebbes, according to Chasidic Heritage Series senior editor, Rabbi David Olidort.

A peek at the handsome volume reveals a smooth and readable translation that remains true to the elegant, fin de siecle tone of Rabbi Shalom DovBer’s style. Thorough notes help the novice navigate through Chassidic concepts alluded to throughout the text.

Inviting those who need extra help to understand Chasidic discourses into the inner circle of advanced study is the common denominator among all members of the Chassidic Heritage Series. U’Mikneh Rav is the nineteenth volume, and it has many fans.

Studying the discourses published in the Heritage Series has another advantage, says Rabbi Yosef B. Friedman, co-editor of the series.

"These volumes aim to give students the ability not only to understand the concepts but to actually learn them in the words of the Rebbe, from the original text.”

U’Mikneh Rav is a sophisticated look at the profundity of Divine Service as expressed in simple devotion.

Related Articles
View All
Books
Book Review: Teaching The Teachers
I spoke to an Israeli kindergarten teacher this summer who explained to me how the philosophy of early childhood education has changed. “Today,” she said,…
Books
Book Review: My Story
My Story: Forty-one individuals share their personal encounters with the Rebbe, Published by Jewish Educational Media
Books
Keeping That Daily Appointment with G-d
What these books will do is give you the roadmap to find your own “Mezherich” so that you too can learn how to daven.
Books
Chabad of Berlin Publishes German Prayerbook, Marks Holocaust Remembrance Day
A new German-language siddur makes the Jewish prayer book accessible to modern German speakers.
Get Inspiration to your inbox!
Newsletter
Join our weekly newsletter for inspiration and updates
Donate
Find Your Local Chabad Center
Chabad
About Chabad-Lubavitch
About Chabad Lubavitch
The Rebbe
Headquarters
Magazine
Magazine
News
News & Updates
In The Media
Impact
Social and Humanitarian
Social and Humanitarian
Education
Education
Community
Community