Does Jewish life have a future in Belgrade? 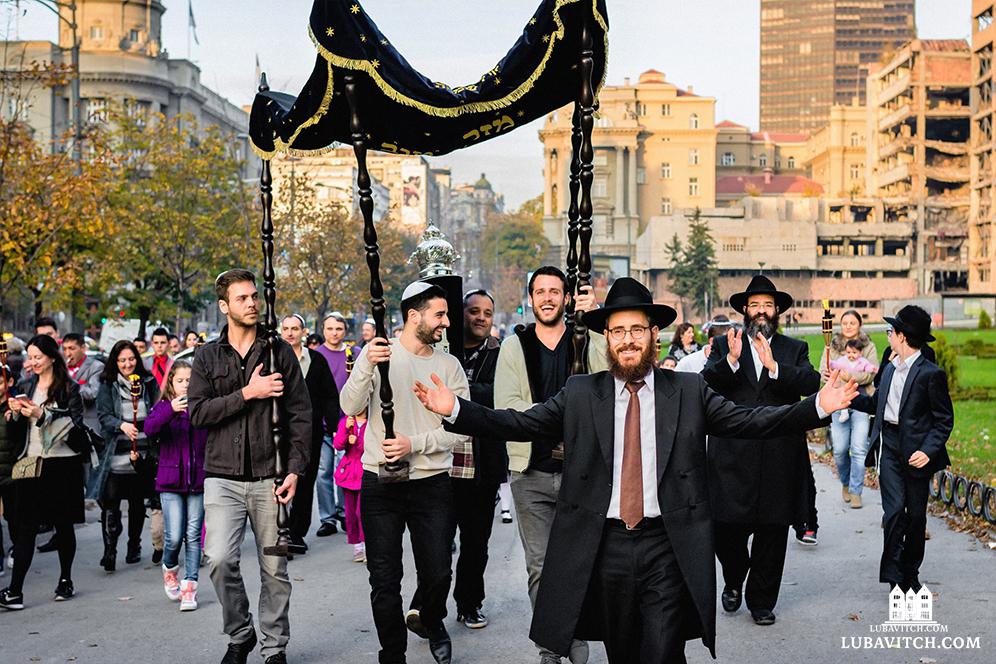 Does Jewish life have a future in Belgrade?

For many, Belgrade’s Jewish community is defined by the tragedy of the Holocaust. But as a new movement devoted to changing the narrative grows, the city’s Jews are discovering the joys of a vibrant, sustainable Jewish experience.

The Nikola Tesla airport looked like it hadn’t been upgraded in a long time. I arrived in Belgrade on a gray February day, late in the afternoon, and after clearing passport control, found my driver in the arrivals area holding up a piece of paper with my name on it. I followed him to a run-down parking lot where we got into an old jalopy caked with mud. It sputtered and stalled and finally started.

I had come to visit Chabad of Belgrade and was looking forward to a first conversation with the cab driver, but the language barrier made that difficult. What I saw out of my passenger-side window was consistent with what I’d read: Serbia is a poor country, with shabby roads and squalid block buildings—communist-era holdovers. The ride was just long enough for me to get oriented.

When we got into in the city, the car turned onto Kneza Miloša street, a main artery flanked by embassies and government buildings. By now it was dark, and the rain was coming down hard. People scurried under umbrellas, dodging nasty splashes of rain from passing cars and buses. The buildings were dimly lit, if at all, but I could see that many of them were nineteenth century historic preservations.

The car pulled up onto the sidewalk in front of what looked like a restoration of a supremely elegant pre-World War I home. The mansion of a Serbian count or baron back in the day, I thought.

Stepping around muddy puddles, I walked up to the glistening building—the only white facade on the street, awash in brilliant light. It beckoned with warmth. “Chabad of Serbia” read the signage on the front. Rabbi Yehoshua Kaminetzky came out to greet me.

Inside a beautifully appointed dining room, two people—travelers from the U.S. who had come in for a conference–were having dinner. At the other end of the long table, a handful of men had just finished a weekly Talmud class with Yehoshua. They were happy to linger and talk. I met Alexander Albahari, 50, a chemist who grew up in Belgrade and knew that he was Jewish, but didn’t know what that meant.

“We had no Jewish practice at home,” he said. A friend invited him to join a class at Chabad. One thing led to another, and Alexander soon discovered the joy of belonging to a community. “Everything I know about Judaism, I learned here,” he said. “I put on tefillin for the first time here, at age fifty. I learned about Shabbat and began studying Jewish texts: Talmud, Mishna, Jewish law, and Kabbalah.” Chabad, he said, is now his “second home,”  the one place where he feels “relaxed” about his Jewishness.

Fedor Bogunovich was also born and bred in Serbia. He’s been a member of Belgrade’s old Jewish establishment for forty years. “I was finally inspired when Chabad came,” he  tells me, describing the Kaminetzkys as a force of unity: “I come in with all my stress, and I leave feeling relaxed.”

“Relaxed” seemed like an odd term in this context. But the old guard of Belgrade’s Jewish community has been mired in bitter strife and squabbles for some time, and the conflict has alienated Jewish locals. Chabad has stayed out of the fray, working instead to change a Holocaust-dominated narrative. “This preoccupation with the past,” says Miri Kaminetzky, “is suffocating Belgrade’s Jewish life.”

Serbia was the only country outside Poland and the Soviet Union where the Nazis killed Jews on the spot without deportation. Out of a prewar Jewish population of 16,000, approximately 14,500 were murdered. It was also the first country after Estonia to be declared Judenfrei—free of Jews. Still haunted by the Holocaust, Serbia’s Jewish community invests the majority of its resources in museums, cemeteries, and other memorials to its tragic past.

“We want Jews here to experience the color, the vitality, and the joy of Jewish life,” Miri says. She describes Serbians in general as remarkably warm and friendly, and says she feels blessed to be living in a country that is uniquely free of the anti-Semitism that is rampant elsewhere in Europe. “So there’s really no reason for Jews here to be afraid to  identify openly.”

Today, Belgrade’s Jewish population numbers about 2,000, but those numbers are dwindling as young people leave for better economic opportunities. Still, the Kaminetzkys say, those who remain deserve better.

“It is heartbreaking to see that most of the Jews we meet, having lived in Belgrade all their lives, have never had the opportunity to really learn what it means to live as a Jew,” Yehoshua says. “To them, Judaism has only been a liability. And you can’t build a future like that. We want the Jews here to live with Yiddishkeit, and to draw life and energy from it.”

Since opening Chabad of Belgrade in 2008, Miri and Yehoshua have been treating Jewish Serbs to a novel experience. Animated discussions over Jewish texts, elegant Shabbat dinners, exciting children’s programs, thought-provoking women’s classes, daily services, guest lectures, holiday programs, and Jewish life cycle celebrations have attracted scores of new regulars and contributed to the development of a dynamic Jewish community. Shabbat services and meals bring about eighty people to the Chabad House, and holiday events draw as many as several hundred.

“It is the only oasis of peace and true Jewish spirit in this city,” says Milena Shnap, a local woman whom I met at one of Miri’s classes. “Rabbi and Miri Kaminetzky and their children have created a welcoming atmosphere for all who come, whether they are tourists, Israeli businesspeople, or domestic visitors.”

Milena speaks enthusiastically about the rich engagement opportunities that she and other Serbian Jews have found at Chabad: “Shabbat services at Chabad exist throughout the year. Children learn weekly about upcoming holidays or interesting Jewish topics. The Kollel Torah organizes lectures for adults—often with prominent visiting guest speakers—as well as a thematic monthly women’s event. Each holiday is extraordinarily organized and leaves us with a strong sense of Jewish unity and an amazing, memorable experience.”

An eclectic group of women, all professionals, settle down for the third in a series of classes about the Jewish calendar. Speaking in English and fairly good Serbian, Miri uses source sheets from primary Jewish texts to guide the women in a discussion about Jewish law. Specifically, the group is investigating why Jews living in the diaspora tag an extra day of observance onto certain holidays. The conversation then expands into an exploration of the mystical aspects of Jewish holidays.

The women stay on after the class, catching up with each other. Miri reminds them that they are invited to the circumcision of a newborn later that week: a young woman in the community gave birth to a baby boy and Chabad is hosting the brit-milah.

For this group, Jewish life cycle events are fairly new experiences introduced to them through the Kaminetzky family’s personal milestone celebrations: their son’s brit-milah, their daughters’ Shabbat candle lighting ceremony, their son’s first haircut, and later, his bar mitzvah.

Olivera Ristic, a forensic graphologist, began learning about Judaism on her own through the internet. But until she got to know the Kaminetzkys, it was all abstract. “When you see an example of a Jewish family living a life of Torah and mitzvahs, that’s very powerful,” She says. “Otherwise, it’s just words.”

The women have formed a close bond with Miri, who is as much a teacher as she is a role model and a confidante. As they learned about mikvah, they expressed an interest in observing the mitzvah. “The problem was that the nearest mikvah was a four-hour drive to Budapest,” explains Miri. So she launched a crowdfunding campaign and, in no time, raised the necessary $90,000 locally to convert a small garage at the back of the Chabad House.

“Their participation speaks volumes about the commitment we have from local Jews who want to join us in building an infrastructure of real Yiddishkeit,” Miri says.

Nir Makdasi, a well respected Israeli real estate developer and important personality in Belgrade’s Jewish and business circles, has been living in the city for the last six years. He greets international buyers from Europe and elsewhere in his sleek offices, which sit atop a luxury residential complex under construction, directly across the Chabad Center. Makdasi exudes success and robust optimism.

As an Israeli transplant, the entrepreneur says he felt a need to be a part of a Jewish community in Belgrade. He looked around for a while until he encountered Chabad. The fresh, enterprising attitude he found with the Kaminetzkys was a perfect fit for him. “I just clicked with Yehoshua,” he says. Makdasi quickly became an active member of Belgrade’s Chabad community.

I express curiosity about his business success in Serbia’s depressed market economy. “It depends where you look,” he says with a chuckle. According to a 2017 report by the World Economic Forum, Serbia’s economic development is considerably below the European average. But, the Forum adds, there is large growth potential, and Serbia’s structural economic reforms “will be the key to unlocking it.”

Makdasi sees that as analogous to what the Kaminetzkys have been doing: “If you focus on the positive, like Chabad does, you unlock great potential. You discover opportunities and you create a gorgeous reality.”