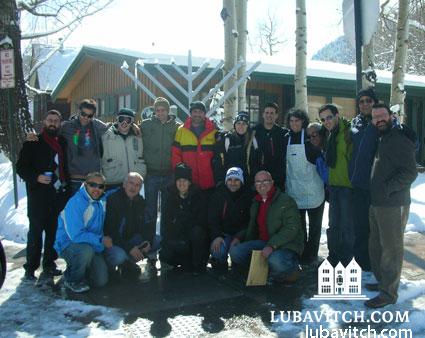 A group photo of the Israeli soldiers upon their arrival in Aspen Friday, March 27, 2009

(Lubavitch.com) On June 21, 2002 Israel soldier Kfir Levy’s Givati unit was operating in the Gaza strip, responding to terrorist rocket strikes and artillery fire, when a rocket-propelled grenade designed for use against armored vehicles and buildings struck him directly in the face.

Known as “Israel’s worst Gaza injury”, Kfir was in a coma for four months, underwent 130 surgeries, is blind in one eye, requires hearing aids, needs mechanical assistance to walk and is paralyzed on his right side.

During the next few days, he’ll try skiiing the slopes of Aspen, Colorado.

Kfir and nine disabled Israeli soldiers will hit the Snowmass ski slopes in Aspen, Colorado as week-long participants in the second annual Challenge Aspen Chabad project to show appreciation for the veterans, boost morale, and share inspiration with the local Jewish community.

Having arrived Friday morning, the group will celebrate Shabbat with Chabad of Aspen before  tackling the slopes with Challenge Aspen instructors and adaptive ski equipment, including harnesses and even wheelchair skis. The program helps the physically impaired go beyond their limitations, to experience the exhilaration and renewed confidence that comes with tackling hurdles.

“After all he’s been through, this represents another level of overcoming the odds and I’m sure the people he meets will be inspired,” said Tzion Levy, Kfir’s father who accompanied him on the trip. “He’s very excited. He carved a special mezzuza holder out of wood in his day program to give to Rabbi Mintz.”

Originally conceived by Rabbi Mendel Mintz of the Chabad Jewish Community Center in Aspen, the project partners with Chabad’s Terror Victims Project in Israel, UJA Aspen Valley and Challenge Aspen, whose instructors will spend the week helping the soldier’s learn how to ski. The group will also visit the Jewish community and members of a disabled American veterans group also at Challenge Aspen for the week.

“Challenge Aspen is known for the inspiring and impactful work they do teaching the disabled to ski,” Mintz told lubavitch.com. “After seeing them work with disabled American veterans, I approached them about working with Israeli solders. They were thrilled.”

Mintz said the project was “obvious” considering that the Israeli soldiers had “made the ultimate sacrifice”.

“We are all citizens of Israel. These are our brothers.  The sacrifices they made, the bullets they took, the shrapnel they absorbed, the loss of limb and mobility they suffered, they made on behalf of us all.  Giving them back an experience like this is one of the most gratifying actions we can take,” Rabbi Mintz wrote in a letter inviting the community to participate.

Chabad's Terror Victims Project handles arrangements on the Israeli side, including choosing appropriate candidates who can most benefit from the opportunity. The ski trip represents one of the many services offered to the thousands of disabled Israeli soldiers they work with. It is a connection that Director Rabbi Menachem Kutner says was created the moment the soldier was injured and never ends.

“We’ve been working with these soldiers since their injuries and during the long rehabilitation process to help them return to a normal life,” said Kutner who will be with the soldiers for the week. “To see them ski after all that is incredible and a real statement of their courage to overcome.”

Dubi Genish was invited by Kunter to join the trip along with his wife for support. The father of four from Kibbutz Revadim was a commander during Israel’s war in Lebanon over two years ago when his tank took a direct rocket hit. Lucky to be alive, Dubi was badly hurt, losing his right leg after nine months of surgeries failed to save it.

From the moment he entered the hospital, Kunter and his staff where on hand to provide support and help the family. Dubi’s wife was pregnant when her husband was injured, and gave birth to a baby boy five months after the incident. CTVP arranged for the bris ceremony to take place in the hospital. After months of rehabilitation, surgeries, and procedures, Dubi today walks with the help of a prosthesis and hopes he can use it to ski as well.

“I never dreamed I would walk again, let alone ski,” Dubi told lubavitch.com. “Chabad has been there for me since day one. This trip is a precious gift and a great opportunity.”