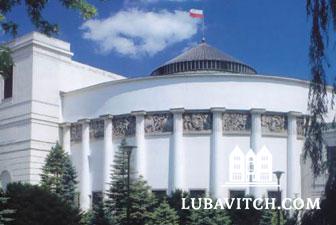 Yet another addition to the roster of public and prominent spaces now displaying giant menorahs, Chabad-Lubavitch of Warsaw will be conducting the first  menorah lighting in the Sejm, or the Polish Parliament on Monday.

In a tradition started by the Lubavitcher Rebbe to publicize and popularize the Festival of Lights, Chabad has brought the menorah to be lit in the White House, the Kremlin, the Brandenburg Gate, in Iraq, embassies, consulates, State Houses, college campuses, army bases, ball games, shopping malls, and more.

The menorah will be lit by Mr. Jaroslaw Kalinowski the Vice Marshal of the Sejm, together with Rabbi S. B. Stambler, Chabad-Lubavitch representative to Warsaw, on the seventh night of Chanukah. Members of Parliament representing a cross section of all political parties will participate in the menorah lighting.
The event at the Sejm is a reflection of the warm support Poland’s government extends to its Jewish population—once the target of extreme and murderous hostility.

Four years ago, Chabad’s first menorah lighting there seemed a surreal event, especially to Jewish survivors in Poland, who came to witness it in disbelief.

Chanukah is that rare occasion when the medium is the message; there’s no better way to convey the light and warmth of this tradition than by lighting the menorah, and the more public the venue, the greater the illumination.

“This really is the message of Chanukah—to transform darkness into light, and nowhere is this better illustrated than by lighting the menorah in places once associated with great darkness,” Rabbi Stambler told Lubavitch.com.

Related Articles
View All
Chanukah with Chabad
{}
Holiday & Shabbos
Lag B’Omer Innovation Under Lockdown
On Monday evening at 18:00 sharp, 45,000 individuals tuned into the livestream at 18for18.com.au. Narrated and presented by children and individuals from Jewish communities across Australia…
Holiday & Shabbos
A Shabbat Dinner for Wine Country Survivors
With California’s wine country reeling from this week’s horrific wildfires—the most destructive of their type in California’s history—Chabad of Sonoma County is rallying the forces…
Holiday & Shabbos
Moving Out
To get her sukkah to Inwood Park in Manhattan on Sunday, artist Shaina Denburg detached its walls. But even in pieces, it didn’t fit in…
Holiday & Shabbos
A First for Sukkot in Shanghai
Rabbi Shalom Greenberg has celebrated Sukkot in Shanghai every year since 1998, but this year’s the first that he’s been able to legally import the…
Get Inspiration to your inbox!
Newsletter
Join our weekly newsletter for inspiration and updates
Donate
Find Your Local Chabad Center
Chabad
About Chabad-Lubavitch
About Chabad Lubavitch
The Rebbe
Headquarters
Magazine
Magazine
News
News & Updates
In The Media
Impact
Social and Humanitarian
Social and Humanitarian
Education
Education
Community
Community