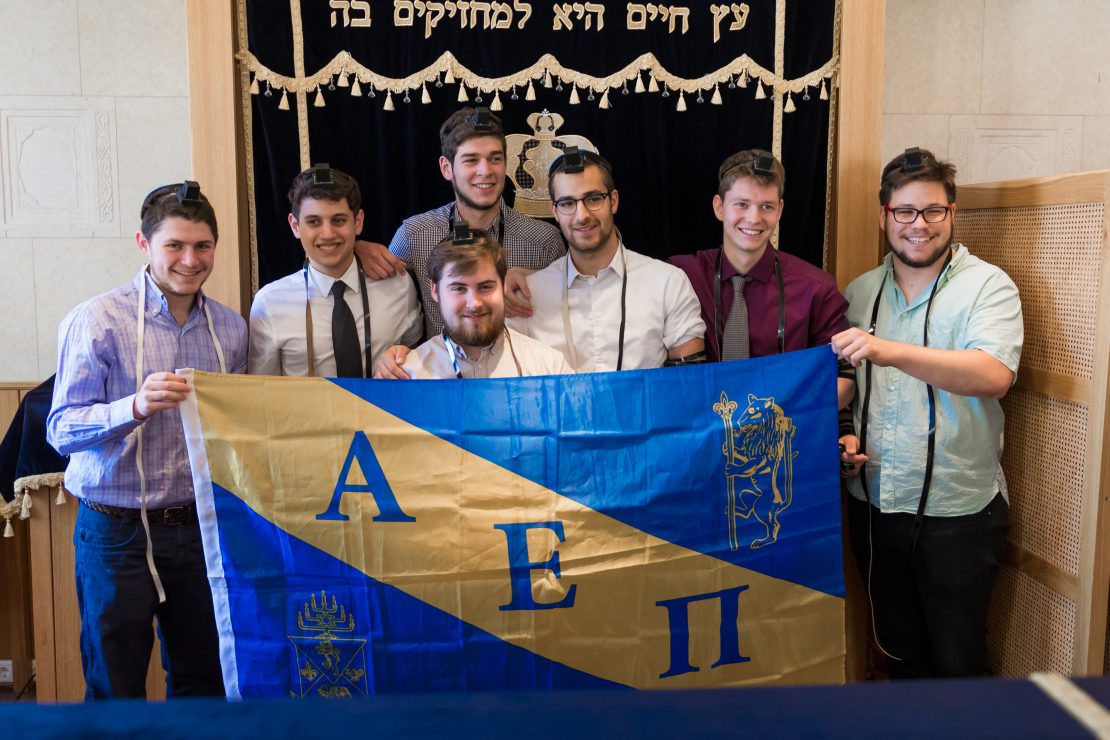 The bar mitzvah boys pose before the Torah ark with an AEPi banner.

Earlier this month, five university students from the Lauder Business School in Vienna were joined by their families from Switzerland, Germany, Hungary and Ukraine as they celebrated their bar mitzvahs.

Over a seven-week period, the AEPi brothers studied the history and laws of Judaism with Rabbi Boruch Sabbach, Chabad co-director of the Jewish Heritage Center on campus.

Finally, the big day arrived. The students were called up to the Torah on a Shabbat as a crowd of sixty family members and friends cheered them on. On Sunday, they prayed in their new sets of tefillin, which were arranged by Rabbi Sabbach with the help of the Chabad on Campus International Tefillin Bank.

Magdolna Várkonyi, an 88-year-old holocaust survivor from Hungary, wept as she described how moved she was to see her first great-grandchild, Benjamin Pretzer, have a bar mitzvah.

“This program was special in that we were able to see immediately how the impact reverberated to their families as well,” said Rabbi Sabbach. “Several of the parents spoke about a new commitment to Judaism and a desire to send their younger children to Jewish Schools.”

The newly bar mitzvah-ed Peter Vandor says he wanted to learn more about his roots and reconnect with them. “We, as five Jewish students, made a huge step forward with our Jewish identity.”

Sabach was as moved as his students. “It was extraordinary to guide these five young men through this important Jewish milestone. They showed a real committment to the lessons and their questions demonstrated a seriousness about the subject and their Judaism.”

Six students have already signed up for next year’s bar mitzvah program.

Related Articles
View All
The Hertog Study: Tracking Jewish Continuity Through Chabad on Campus
A new third-party study on Chabad’s impact on Jewish students at American college campuses challenges Jewish philanthropic organizations to take a closer look at how…
The Shluchim Office Relaunches International Tefillin Bank
In honor of the 50th anniversary of the tefillin campaign, the Shluchim Office will reopen the International Tefillin Bank.
Tefillin: The Pulse of Israel
As head of the Mossad, Israel’s national intelligence agency, Yossi Cohen’s routine is anything but humdrum. Beginning his day at the crack of dawn, the…
Get Inspiration to your inbox!
Newsletter
Join our weekly newsletter for inspiration and updates
Donate
Find Your Local Chabad Center
Chabad
About Chabad-Lubavitch
About Chabad Lubavitch
The Rebbe
Headquarters
Magazine
Magazine
News
News & Updates
In The Media
Impact
Social and Humanitarian
Social and Humanitarian
Education
Education
Community
Community