Chabad Seders Around the World: 4,340 And Counting 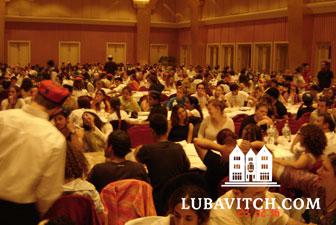 Guests settle in before beginning the Seder in Nepal. Lubavitch.com archives-2006.

The Haggadah speaks of the proverbial Four Sons. Chabad is out there searching for yet a fifth–the Jewish son or daughter who may have had no plans to join a seder.

Back in 1998, Israeli-born Shachar Zefania felt drawn to return to trekking the Himalayas, where he backpacked after his mandatory army service seven years earlier.

A secular Israeli who had then finished a film degree at Tel Aviv University, Zefania wanted to document the experience on film. He began the journey in Kfar Chabad in Israel. Then he flew to Asia and trekked to Gokyo Peak. The trip climaxed at the legendary Chabad seder in Katmandu, Nepal in the valley below.

There, he forged a lasting connection with Rabbi Asi Spiegel. Now at Chabad of Eugene, Oregon, Spiegel led the Katmandu seder for seven years. Armed with a professional film crew, Zefania recorded Chabad’s Passover preparations in Israel and Nepal, combining the story with his trekking experiences. He ultimately produced a 56-minute documentary called “Seder Trek.” It has since aired on Israeli Channel 2 and at film festivals around the world.

“Nepal was the best experience of my life and the best friend of my life is Asi Spiegel,” says Zefania, now 37 and a filmmaker/director living in Los Angeles for the past year with his wife and children. “It’s a great thing for enabling every Jew where ever he or she is to make a seder.”

From Honolulu to Hanoi, Luzern to Lima, Pukhet to Phnom Phen and countless points in between, “frequent fliers,” travelers and locals of every Jewish variety will visit Chabad on the 14th of Nissan. They’ll arrive en masse on the night of April 2nd to re-enact the annual ritual meal central to Jewish identity. The night wouldn’t be the night without reciting the Exodus from Egypt and washing down ritual foods–karpas, charoset, matzah and maror–with the requisite four cups of wine. Making it all happen are some 3,000 Chabad emissaries, their wives and a cast of about 1000 volunteer yeshiva students arranging and conducting no less than 4,340 communal seders round the world.

Matching these rabbinical students with the right location is one of the trickiest parts of managing the operation. The key is make sure they fit the language requirements—Hebrew as well as the local tongue. One office at Lubavitch Headquarters is dedicated to just that.

The program, says Rabbi Moshe Kotlarsky, Vice Chairman of the Lubavitch educational division, who travels the world to develop new Chabad outposts, is "a trademark of Lubavitch outreach at its best.” It is a reflection of the Rebbe’s wish, “to ensure that every Jew—even that fifth child who does not know to come to a Passover seder, is brought to the table. And if that means that we have to bring the seder to them, well, that’s what we do,” Kotlarsky says, pointing to St. Thomas; Windhoek, Namibia; Varna, Bulgaria, and hundreds of other spots around the globe.

Local and international donors help out with some of the costs to keep seders affordable and/or free. In addition to local residents who frequent Chabad, business travelers and visitors, the seders also attract countless college students who gather at dozens of U.S. college campuses. Thousands more guests around the world, many of them Israeli backpackers, will crowd into the largest Chabad seders on record in South America and Asia. Some 1,400 are expected Cusco, Peru, for example, and 800 have made reservations in Bariloche, Argentina.

Rabbi Yosef Kantor, the Chief Rabbi of Thailand, has been organizing seven seders this year near his adopted home of 14 years. Some of them, at the traditional Chabad House in Bangkok, for instance, are for 150 “regulars.” Kantor also expects another 800 to 1,000 participants at a second Bangkok location aimed at backpackers in the tourist district. And, with past experience as an indicator, additional travelers, young and old, will likely land in Pattaya, Pukhet, Chiang Mai and Ko Samui in Thailand, as well as Luang Prabang in the nearby country of Laos. In total, they are expecting 3,700 across the seven locations.

Thanks to these energetic guests, backpacker seders are unparalleled in their style. “They are extremely lively. And it's quite a feat to conduct the seder and hold the attention of everybody until we get to the juicy parts like the matzah,” Kantor says. “Once the meal starts coming out, from there on it's a lot of singing and dancing. And usually it culminates with ‘Echad Mi Yodea [the classic Passover song, “Who Knows One?”]. And by the time we finish that, the ones who lead the seder, and the participants, are up on the chairs.”

For these events, Kantor places such large orders of supplies from Israel that they are shipped by container. His budget totals $130,000, half of which comes from LWH. The other half comes from Jewish donors all over the world. To lead the seders, Kantor works with his fulltime Chabad staff of nine families in five different locations plus six yeshiva students who come in for the event. Among them is Rabbi Levi Chitrik, 24, a post ordination student studying for a rabbinic law degree at the central Chabad Yeshiva in Crown Heights who has repeatedly volunteered at seders in the Ukraine, Bulgaria and, in 2006, in Thailand.

“It's a wonderful feeling,” Chitrik says. “Sitting at the seder with so many people, all enthusaistic and excited to be there. It’s a great experience. I feel like I'm giving. I'm helping out.”

Chabad also conducts seders in approximately 90 locations that do not yet have a full-time emissaries or shulchim. For the first time this year, for instance, Chabad will host a seder for 30 to 40 guests in Phnom Phen, Cambodia. As Kantor explains, “We found a group of Jews interested in having a seder. Most of them are not very observant but most of them want to connect. They want to come to the seder.”
Even with the huge crowds drawn to Thailand and other destinations, the largest backpacker seder is Nepal. Estimates vary but this year they are preparing for 2,100 guests. Many of them are Israelis who explore the Himalayas after they complete mandatory service in the Israel Defense Forces.

As Israeli filmmaker Zefania explains, his documentary, “Seder Trek,” is not only about the powerful experience of attending Chabad’s largest seder in the world. It is, he says, “really about ahavat yisrael”–love for one’s fellow Jew, a message shared by the holiday.

Award-winning freelance journalist Lisa Alcalay Klug is a contributor to the New York Times, Forward and many other publications. Her book, Cool Jew: The Ultimate Guide for Every Member of the Tribe, will be published next spring by Andrews McMeel.

Related Articles
View All
Holiday & Shabbos
It’s A Lemon. It’s An Orange. It’s An Esrog!
It may bear resemblance to its cousins, but the esrog is no simple citrus.
Holiday & Shabbos
An Out-of-the-Box Way to Celebrate in the Sukkah
Those peculiar huts are popping up again on driveways and porches in Jewish neighborhoods around the world. The Feast of the Tabernacles, or Sukkot, is…
Holiday & Shabbos
Memories of Sukkot 1991
Sukkot 1991 was different. The crowds were enormous. But this time, the Rebbe remained standing in the sukkah for the next six and a half…
Holiday & Shabbos
Home Alone on the Holidays
For many of us, the High Holidays will look quite different this year. This year, we are called upon to lead those services ourselves, to…
Get Inspiration to your inbox!
Newsletter
Join our weekly newsletter for inspiration and updates
Donate
Find Your Local Chabad Center
Subscribe
|
Log In
Chabad
About Chabad-Lubavitch
About Chabad Lubavitch
The Rebbe
Headquarters
Magazine
Magazine
News
News & Updates
In The Media
Impact
Social and Humanitarian
Social and Humanitarian
Education
Education
Community
Community