Chabad Representatives To Be Buried In Israel 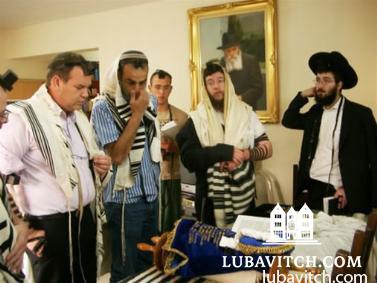 A recent photo of Rabbi Holtzberg second from right with tallit and tefillin on his head, at the Chabad House in Mumbai.

(lubavitch.com) Three days of intense fighting and fear ended in grief Friday when the deaths of Rabbi Gavriel and Rivka Holtzberg were confirmed in Mumbai, India. Reports indicate that Mrs. Holtzberg was killed Thursday, while her husband was killed shortly before the ordeal was over.

The Holtzbergs will be buried in Israel on Tuesday. The funeral is scheduled to begin at the 770 Chabad Center in Kfar Chabad, and proceed from there to Jerusalem.

Rabbi and Mrs. Holtzberg moved to Mumbai in 2003 to open a Chabad outpost in India’s financial center. In 2006, they procured the current center, also known as Nariman House, which is in the central Colaba Market Area.

Gavriel Holtzberg, who was born in Israel, spent much of his adolescence in Brooklyn, New York. He was a trained shochet (ritual slaughterer) and was known to be an erudite scholar. Many visiting businessmen and local Indian Jews studied with him on a regular basis.

Rivka was born in Israel as well. She too, was known for her warmth and scholarship. Rivka was a gracious hostess who prepared meals for large numbers of visitors, and led popular women’s events and classes.

Lubavitch.com spoke with Aimee Ginsburg on Friday morning before the deaths were confirmed. Ginsburg, who lives in Goa, is the Indian bureau chief for Israel’s largest newspaper, Yediot Acharonot. Though she does not live in Mumbai, Ginsburg was close with the Holtzbergs and celebrated her son’s bar-mitzvah with them last year. She was last with the Holtzbergs on Yom Kippur of this year.

“It is a very heimish Chabad center,” explained Ginsburg. “Unlike the other outposts in the Far East (there are 12 in total) this one served a large contingent of American and European businesspeople,” many of whom are religious. She says this mix of typical Israeli backpackers, local Indian Jews, and visiting businesspeople, gave the Chabad House “a different and unique twist.”

The building itself was the subject of worldwide interest as six terrorists kept its residents hostage and Indian commandos ultimately recaptured it. “It was just recently remodeled,” said Ginsburg. As news headlines declared that different floors were being conquered, Ginsburg explained that each “floor is really only the size of a room and a half.” The downstairs contained a kosher restaurant and dining room. Above that were two rooms for lodgers. The Holtzberg’s apartment was on a higher floor.

At a press conference on Friday, Chabad Lubavitch’s Chairman of Educational and Social Services, Rabbi Yehuda Krinsky said that "the targeting by terrorists of foreign nationals, underscores the need for governments to work collectively to fight terrorism resolutely and effectively, so that the hands of those seeking to destroy life and disrupt peace will no longer reach their targets."

Two luxury hotels, a train station, and hospital were also assailed. The Holtzbergs and others in the Chabad House were among the 160 casualties. In the words of American radio personality, John Batchelor, “this was a pogrom.”

The terrible, and often conflicting, unfolding of events kept the international Jewish community riveted and united. In synagogues and Chabad centers around the world encouraged members to increase in their good deeds and recitation of psalms. Prayers poured forth from synagogues, schools, and homes across the Jewish spectrum, for the Holtzberg's and other hostages trapped at the Chabad House.

A collective wave of relief engulfed the world when the Holtzberg’s longtime cook, Sandra was seen escaping the building clutching the Holtzberg's two-year old son, Moshe. The boy was unharmed, but his clothing was drenched in blood. Both went to the home of an Israeli diplomat where they waited until Rivka’s parents arrived. “It took him a long time to fall asleep last night,” says Ginsburg who was with them, “and now he is playing ball with Sandra and is very well-loved. But he is asking for his parents all the time.”

Ginsburg claims that the population in India, which is predominantly Hindu and Muslim, “don’t even know what anti-Semitism is.” It is “very refreshing” for the Jews and Israelis who visit here,” she says, “because India is a very tolerant country.” She says that the Chabad Center (like the large malls and hotels in India) did have some security prior to the attack.

The Jewish outreach that the Holtzbergs dedicated their lives to continued this Shabbat in Mumbai. A colleague from Goa, Rabbi Dovber Goldberg, organized Shabbat prayer services and meals for some 40 Israelis in the city. Rivka’s parents, Rabbi and Mrs. Rosenberg from Afula, Israel, participated as well.

At Lubavitch Headquarters, a drive to rebuild Chabad of India has been launched: Click here to contribute.

Related Articles
View All
Statement from Lubavitch World Headquarters
STATEMENT BY RABBI YEHUDA KRINSKY ON THE SITUATION IN MUMBAI, INDIA For Immediate Release (LNS, NY) Once again, terrorism has reared its evil head, this…
Mumbai Update
WEDNESDAY 10:45PM: CNN/IBN reports that the Chabad House had been taken over by the terrorists, and that Indian forces were preparing to storm the…
Features
Wordsmith: Chasid
As is true of every close-knit cultural group that enjoys a history, traditions and habits particular and peculiar to it, conversations among Chabad Chasidim are…
Features
Remembering The Struggle for Russian Jewry
Ninety-three years ago today, Rabbi Joseph I. Schneersohn, sixth Lubavitcher Rebbe, was freed from Soviet-imposed exile.
Features
Wordsmith: Tamim
The tamim is unflappable. He does not sway with the winds of change, nor bend to meet the expectations of others. He is a simple…
Features
Remembering Rebbetzin Chana: Jewish Feminine Role Model
Rebbetzin Chana Schneerson, a feminine role model of Jewish activism and proponent of Jewish scholarship, mother of the Lubavitcher Rebbe and wife of Rabbi Levi…
Get Inspiration to your inbox!
Newsletter
Join our weekly newsletter for inspiration and updates
Donate
Find Your Local Chabad Center
Chabad
About Chabad-Lubavitch
About Chabad Lubavitch
The Rebbe
Headquarters
Magazine
Magazine
News
News & Updates
In The Media
Impact
Social and Humanitarian
Social and Humanitarian
Education
Education
Community
Community