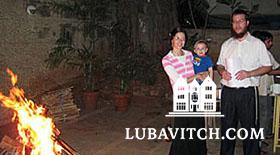 WEDNESDAY 10:45PM: CNN/IBN reports that the Chabad House had been taken over by the terrorists, and that Indian forces were preparing to storm the facility.

THURSDAY 3:00 AM: Confirmation has been received that the Holtzberg's child had been rescued when two employees escaped from the Chabad House.

11:00 AM: Situation with Rabbi and Mrs. Holtzberg still unclear.

2:30 PM: TV reports state that NSG commandos evacuated five hostages from the Chabad House in Mumbai and took them to a secure location. There is no word yet regarding Rabbi Gavriel and Rivka Holtzberg, whose 24-month old son had been rescued earlier today. Police cut off power to the Chabad House where they say two or three hostages are still holed up.

5:30 PM: Earlier reports of evacuations from Chabad House were most likely from an adjacent building.

FRIDAY Early morning: Commandos land on Chabad House roof and battle terrorists.Commandos blast opening in building. Still no word on Holtzberg's and others inside.

Search for Chabad Family in Mumbai After Terrorist Strike

The situation is grim late Wednesday in Mumbai (Bombay) India where reports of more than 80 dead and 250 wounded are seeping out of the beleaguered city. Of great concern is the silence from Chabad’s representatives to Mumbai, Rabbi Gavriel and Rivka Holtzberg. No one from the Chabad center has been heard from since the attacks.

The dead and wounded are victims of a sophisticated plot in which seven locations throughout the city were attacked by terrorists. Several of the city’s most exclusive hotels, a restaurant, train station, and hotel were bombed. The attacks come as the country is consumed by controversial elections.

The city, which is India’s financial capital, plays host to many foreigners and their embassies are assisting in the search and rescue efforts.

Lubavitch personnel in Bangkok, Israel and New York are working closely with the Israeli Foreign Ministry and  the U.S. government to help establish contact with the Holtzbergs and other missing persons in the Chabad House area.

Mumbai’s Chabad House, situated near the sites of destruction, is a popular stop for Israeli tourists. The Holtzbergs offer a host of programs, including providing kosher food, to locals and visitors alike.