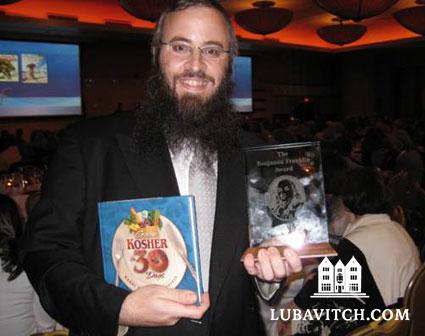 (lubavitch.com) Chabad-Lubavitch Rabbi Zalman Goldstein's book GOING KOSHER IN 30 DAYS! was named winner among the three finalists in the religion category for the 2008 Benjamin Franklin Awards from IPBA, the Independent Book Publishers Association.

The award recognizes excellence in independent publishing and highlights the best titles and trends in major publishing categories.
The award ceremony, at the Wilshire Grand Hotel May 29, drew some 500 industry professionals, book buyers, critics and other publishing leaders. Upon accepting his award, Goldstein noted that every mitzvah achieved brings a positive spiritual global warming.
Goldstein thanked IPBA for recognizing the efforts and work that went into making GOING KOSHER IN 30 DAYS! the success it is. “And to my fellow Jews,” Goldstein quipped,  “my brothers and sisters here tonight, and those watching from afar, remember this title, because tomorrow morning is day number one!
GOING KOSHER IN 30 DAYS! ($22.95, Sept. 2007, ISBN 978-1891293238) shows the simply curious and those seriously considering going kosher all the whys and hows of kosher. With cleverly divided chapters following the days of a single month, the book contains everything needed to launch a personal path to kosher observance.
Judged by a panel of more than 190 judges from throughout the publishing industry who weighed and evaluated more than 2,500 submissions in over 50 categories, the Benjamin Franklin award recognizes that GOING KOSHER IN 30 DAYS! was the most successful in achieving its purpose and meeting its intended audience's needs.

The award ceremony kicked off the 2008 BEA Expo (Book Expo America) in Los Angeles which features the largest selection of English language titles in the world with buyers at wholesale and retail levels, librarians, book critics.

The award comes at a time when interest in kosher observance is at an all-time high, with more kosher food availability at chain supermarkets than ever before, and more possibilities for eating kosher when eating out. Even beyond the U.S., in Beijing, Buenos Aires and Goa, in countries with small Jewish populations, kosher awareness is growing. Recently, the world's largest barbeque in Uruguay, for example, was launched with a kosher beefsteak.

Rabbi Goldstein has authored other books to help readers gain confidence and skills to participate in Jewish practice. Among them are the popular Shabbat Table Companion and Shabbat Synagogue Companion, which won the prestigious IPG/PMA award for their innovation and design. He specializes in coaching individuals and families in their quest for Jewish growth.