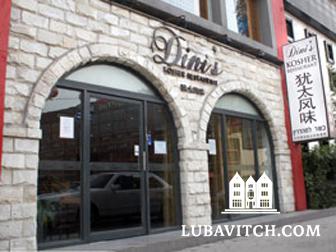 (lubavitch.com/LNS) Dini’s Kosher Restaurant, the only one in China’s capital city, will open a second location in the Olympic Village in Northern Beijing in time for the 08 Olympics, Chabad representative to Beijing, Mrs. Dini Freundlich, told Lubavitch.com.
The restaurant, which opened last March, features a meat and fish menu, caters to local Jews, tourists, businesspeople, and to Chinese people who are “fascinated by Jewish food,” says Mrs. Freundlich.
The second location will accommodate athletes, fans, trainers and the press with a kosher lunch menu so that they don’t need to make the 25 minute drive from the Olympic Village in Northern Beijing to get a kosher meal.
But even with a second location, Dini Freundlich, for whom the restaurant is named, expects it will be turning out 400 meals a day during the Olympics. The restaurant seats 70 and fills up several times a day.
Rabbi Shimon Freundlich will be responsible for kosher supervision throughout the Olympics and is working to ensure that all religious needs of Jewish guests and athletes will be adequately addressed.
That includes Shabbat meals, prayer services, “and anything else that Jewish people at the Olympics might require,” he says.

Related Articles
View All
In Some Cities, Chabad House-Cum-Restaurant Draws People In
(lubavitch.com/LNS) Frantic financial types can unwind with café con leche and medialunes pastries while restoring their spirit with Jewish thought and prayer in downtown Buenos…
Get Inspiration to your inbox!
Newsletter
Join our weekly newsletter for inspiration and updates
Donate
Find Your Local Chabad Center
Chabad
About Chabad-Lubavitch
About Chabad Lubavitch
The Rebbe
Headquarters
Magazine
Magazine
News
News & Updates
In The Media
Impact
Social and Humanitarian
Social and Humanitarian
Education
Education
Community
Community