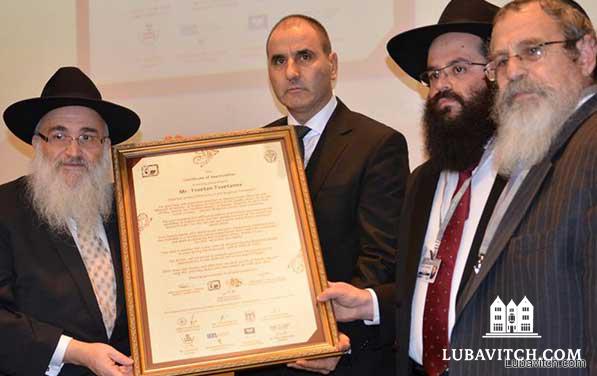 Presenting the certificate to former Deputy Prime Minister and Minister of Interior of Bulgaria Tsvetan Tsvetanov.

Bulgaria’s former Deputy Prime Minister Tsvetan Tsevatanov was recognized by Chabad leaders and his country’s own Chabad representative, during the International Conference of Chabad-Lubavitch Emissaries.

Deputy chairperson of the Citizens for European Development of Bulgaria (CEDB) and former interior minister, Tsevatanov participated at the annual conference:

“For your help and important activities as Deputy Prime Minister and Minister of Interior of Bulgaria at the time of the deadly attack of the 18th of July, 2012 at the Sarafovo Airport of Burgas, Bulgaria, in which five Israeli citizens and one Bulgarian citizen were murdered,” read the certificate presented to Tsvetanov.

The then-deputy prime minister assisted in ensuring, as prescribed by Jewish law, the speedy transfer of the victims for burial in Israel. “For this we owe you a great many thanks and much appreciation.”