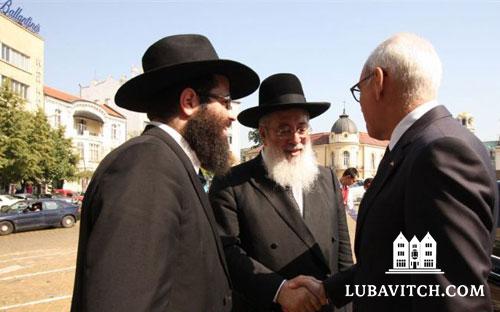 (lubavitch.com) Three milestones of Jewish revival in Bulgaria were feted in grand style by dignitaries, the Chief Rabbi of Israel and hundreds of well wishers at the Rohr Chabad Jewish Community Center in Sofia this week.

With the opening of a modern mikvah, a kosher restaurant and a new Torah, Bulgaria’s Jewish community, dating back to the reign of Roman Emperor Caligula, now possesses the seeds for a renaissance.

“We are working and growing to bring Jewish life closer to Jewish people here,” Rabbi Yossi Salamon, Chabad’s representative in Bulgaria with his wife Tamar Salamon since 2000, told Lubavitch.com.

Rabbi Moshe Kotlarsky, Vice Chairman of Merkos Linyonei Chinuch, Chabad’s educational division, delivered yet more good news at the event when he announced that a second Chabad couple, Rabbi Yossi and Racheli Halperin will be moving from Israel to Bulgaria to expand Chabad activities in the country.

Community members toured the sparkling, luxurious mikvah pool. Built with support of the Bistritsky and Raitport families, the mikvah is expected to make the observance of mitzvah more accessible, more widespread.

Impressed by the outpouring of enthusiasm at the gala dinner held at the Princess Sofia Hotel later in the evening to herald the Jewish community’s achievements, Mayor Boyko Borisov pledged greater support and cooperation on the municipal level. Israel’s Ambassador to Bulgaria, Noah Gal Gendler and Dr. Maxim Bienveniste, president of Sofia’s Jewish community, applauded his remarks.

Israel’s Sephardi Chief Rabbi Shlomo Amar reflected on the changes Chabad has brought to Bulgaria in seven years. “Without the emissaries of the Lubavitcher Rebbe, I cannot imagine what the world would look like today,” the Chief Rabbi said.

Change has been gradual for the estimated 9000 Jews of Sofia. “Every mitzvah, every small step is a big one to us,” said Rabbi Salamon. He points to community Shabbat dinners, well attended prayer services, women’s groups, and adult education classes, and the 550 mezuzahs that now adorn the front doors of Bulgaria Jews as the first signs of change.

“People used to be ashamed or scared to show they were Jewish. Now they proclaim it on their doors.”

Also reemerging is Bulgarian Jewish pride in their considerable Sephardic heritage. In its heyday, before World War Two, there were 50,000 Jews in Bulgaria, most of them Sephardic. A major wave of Spanish Jews fled to Bulgaria at the height of the Inquisition. Middle aged Jews still speak and sing in Ladino, a patois of Spanish, Hebrew, Arabic and Turkish. Many chachamim, wise and holy men, such as Rabbi Yosef Caro, author of the Code of Jewish Law, lived in Bulgaria.

Participating in Chabad activities is not contradiction for Sephardic Jews. “Chabad was shaped by many different languages, traditions and people from all over the world. We add the spirit of Chasidism, the joy, and we are all one nation,” said Rabbi Salamon.
As a result, services at the synagogue in the Jewish Community Center incorporate tunes familiar to the Bulgarian Jewish community. Traditional Sephardic foods are served at Chabad functions.

Those special piquant dishes are to be prepared in Chabad’s new restaurant kitchen. The commercial facilities will also be used to cater Shabbat meals in distant cities. Chabad regularly hosts Shabbat programs in Plovdiv, Rousse, Burgas, Shumen, Staragova and beyond.

There are plans to ship vacuum packed kosher meals from the restaurant to Bulgaria’s many resorts on the Black Sea that have received attention from Chabad. An estimated 16,000 Jewish people, mostly Israeli (a two-hour flight away) visit the Black Sea each summer. Chabad’s summer outpost at the Zlatni Pyasatsi – Golden Sands Resort, hosts synagogue services, Torah classes, a Jewish library and Shabbat meals.

“We are bringing a lot of Jewish light and life to the area,” said Rabbi Salamon. With the new Chabad representatives on the way, mikvah, Torah, and restaurant, the future is bright for the Jews of Bulgaria.