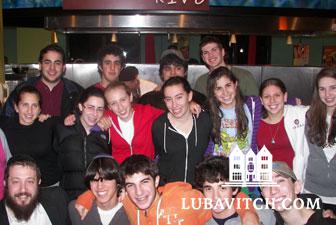 One good deed begets another, say the sages. It's easy to imagine how much good can result when a group of students from Ramaz, Habitat for Humanity, and Chabad-Lubavitch join hands . . .

(lubavitch.com/LNS) President’s Day Weekend is off time for most high school students, but in York, PA, a group of sixteen Ramaz students got down and dirty, hacking away as they volunteered for Habitat for Humanity, and then, spontaneously, for Chabad of Lancaster.

When Deedee Benel, Educational Director of Activities at Ramaz Upper School in Manhattan contacted Habitat to coordinate the students’ volunteer effort, they told her that their help was welcome in York, where more hands were needed in finishing the construction of housing for the poor.

Benel looked up the nearest Chabad House and found Rabbi Elazar Green, Chabad representative to neighboring Lancaster. His response, she says, was “phenomenal.”

Though Habitat had offered a place for the students to sleep as well as a kitchen to prepare their meals, the place was a church basement and the food from a non-kosher kitchen. Both were obviously unacceptable to these Ramaz students.

Green offered the Chabad House for accommodations, but the space was too small to suitably house everyone. Instead, he helped arrange lodging at a nearby motel.

And then, says Benel, Rabbi Green accommodated her and the students at every turn. There wasn’t a thing they had asked for, she says, that he missed. From the moment they “came off the bus yawning,” Rabbi Green was there, greeting them at midnight with juice and snacks, and a “no problem,” response to all of their concerns that he swiftly took care of.

Sunday morning, the students set to work, knocking down walls, screening new windows, and preparing areas for painting as part of the Habitat for Humanity program.

Hard work makes for large appetites and Rabbi Green and his wife Shira hosted the students in their Chabad House for dinner. Shira shopped in Maryland, almost three hours away, to get the kosher items she needed to prepare the lavish meal for the hungry workers. Students from the nearby college and friends of the Greens, joined in, rounding off a “beautiful, delicious meal,” with guitar playing, singing and dancing.

The students had so warmed up to the Chabad Shluchim, explained Benel, that Monday afternoon, she arranged for them to assist with the refurbishment of the new Chabad House in York, set to open in the near future. Rolling up their sleeves, they cleaned debris, painted door trims and pledged to purchase mezuzot for every door post in the new Chabad house.

Before leaving Monday evening, Rabbi Green contacted the admissions office at Franklin and Marshall College and let them know that there were 16 hungry prospective Jewish students in the area. “It’s on us,” said the Dean of Admissions, inviting them all for a warm meal at the full-service kosher Café Kivo.

More than the hospitality and concern that the students found in Rabbi Green, Benel told Lubavitch.com, was the way he connected with them.

It is very simple for these “Ipodniks” to get turned off from too heavy a dose of religion, she told Lubavitch.com. Not so in this case where throughout all their interactions in the course of the two days, Rabbi Green met them with a warm smile and a short Torah thought. Not once was he judgmental.

As the bus pulled away from Lancaster Monday evening, Rabbi Green called out: “I’m on facebook, I expect to hear from all of you!”

She knew she made the right move in contacting Chabad, says Deedee Benel.

“It’s the magic that always works.”