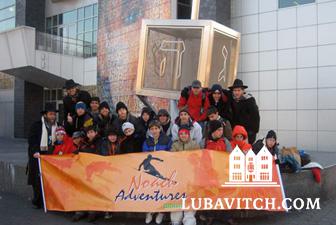 (Lubavitch.com/LNS) Eduardo Rothschild I. Caras is grateful he was not among the 300 beachgoers stung by jellyfish in S. Paulo on Sunday.
The 15 year-old Brazilian considered what he would be doing if he weren’t enjoying a Chabad sponsored trip that mixes Judaism, touring New York and skiing in Canada. He and nineteen others in his group drove in a gleaming white bus to a kosher ice cream shop in Brooklyn for a Sundae run minutes to midnight after Shabbat.
If not at the beach, he told Lubavitch.com between spoonfuls of double fudge ice cream, he’d be on his cell, playing soccer, or touring Florida’s Disneyworld with another youth group.
That, said Rabbi Noach Gansburg, one of Chabad’s representatives in S. Paulo, is the problem. It’s a rite of passage for Brazilian teens to head to the U.S. on group tours during their summer vacation. After weeks of bunking in hotels and spending hours traveling by bus and plane, the kids bond and come home deep in puppy love, often with their non-Jewish tour mates. It’s the last thing S. Paulo’s Jewish population of 60,000 needs: Demographers estimate six out of every ten Brazilian Jews marry out of the faith.
For tradition minded Jews, S. Paulo is the place to be in Brazil with the infrastructure every Jewish community requires. Chabad, a presence in Brazil since World War II hosts seven centers in the state, a day school and yeshiva, and three mikvahs. The community supports still more Jewish schools, mikvahs, synagogues, kosher restaurants and supermarkets.
To keep the unaffiliated from disappearing, Chabad-Lubavitch leaders in S. Paulo are turning to creative programs like Noach Adventures to fight the tide of assimilation. The travel program began four years ago to expose some of Brazil’s least affiliated Jewish teenagers ages 10-16 to the idea that Judaism and exciting adventures mix, well. Twenty boys took part in December’s trip to New York and Canada, including a blond haired teen from Belo Horizonte, who endured a seven-hour drive to join the group before it departed from S. Paulo. For the first time this year, Rabbi Gansburg and his wife Pessy will be returning to the U.S. with an all-girls group.
“We find sponsors to cut down the price of the trip so more children can join us. Children learn through their senses,” said Rabbi Gansburg. “Participation in the Jewish aspects of the trip is not a must, but the children see what we do and they want to do it too. For ten days, they get a taste of Jewish life, and that taste can change their life.”
Noach Adventure trips, which run throughout the year, are a gateway to the activities taking place at the Gansburgs’ Novo Horizonte Jewish Center for Education and Culture. Teens and their families attend Shabbat getaways, day trips, and weekend hikes, but most activity takes place on the three floors of the 4,800 sq. foot center. Five thousand individuals a year take part in the cradle to senior activities: Mommy and me, family Shabbat dinners, art classes, Hebrew school, bat mitzvah club, bar mitzvah club, summer camp and winter camp.  All of these attract crowds to take place in the center’s sunny, villa style building.
Mrs. Gansburg, co-director of the center, teaches a Jewish culinary course in a demonstration kitchen and runs a lively lunch and learn program for women.  Her popularity and professionalism were evident when a glossy cookbook she produced based on her classes promptly sold 10,000 copies.  “I count on my wife’s creativity. She was a head counselor at Chabad camps for years, and her ideas keep on coming,” said Rabbi Gansburg.
It is also at the center, on grounds scented by blooming fruit trees, where some highly creative Jewish education tools are dreamt up. The Center published a full color Jewish game book with 65 activities in it that was ordered, and re-ordered by all the Jewish schools in Brazil. The Gansburgs designed Chanukah-in-a-tube kits and sent them to 5,000 homes. Before last Passover, they and their team hand-wrapped 60,000 pieces of bread as part of pre-holiday pack sent to 6,000 families. Full instructions and the traditional feather and candle were included to give recipients everything they needed to perform the mitzvah of searching for leaven on the night before the Seder. In the works is a Jewish trivia card game to build their community’s general Jewish knowledge.
Caras, the soft-spoken scion of the Rothschild dynasty who came to NY on the suggestion of the Gansburgs, knew the tour was going be led by a rabbi, but he was drawn by the prospect of exploring New York City’s tourist spots and skiing in Canada.
It surprised him to be so very moved by the Shabbat he experienced in Brooklyn.
“At home people talk about being Jewish. In New York, they live it. The feeling in the air is different.”