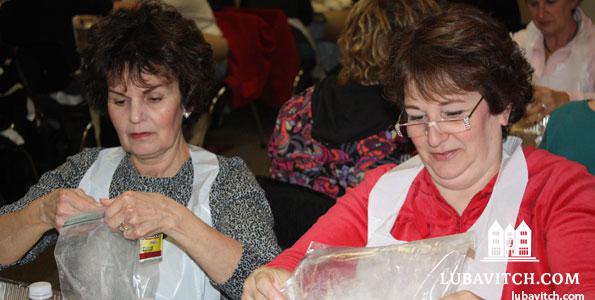 (lubavitch.com) At the University of Connecticut, fresh loaves of Challah serve as a bond for the students and local seniors. In conjunction with Jewish fraternity and sorority AEPI and AEPhi, Chabad hosted a Loaves of Love baking event for the school’s Jewish Huskies.

More than 60 students, both men and women, came to bake (and nosh) in the fraternity house. They prepared gift bags with ribbons and Shabbat messages to send the challahs to 20 seniors in the community (many of whom are former professors at the school).

Loaves of Love events have been meshing social action and Jewish vibes on this campus for the last three semesters. Chabad rebbetzins on campuses around the country run similar programs.

“The whole house smelled like challah. Everyone was so excited about it—it really brought out their Jewish feelings,” says co-director Mrs. Shaindel Hecht. “They started talking about their bar/bat mitzvahs, comparing who ‘was more Jewish’ than the next.”

Thick, lustrous braids and the aroma of bread baking have been a symbol of the Jewish home since our foremother Sarah shaped challah loaves in her airy tent. Different customs have surrounded this hallowed mitzvah for millennia; and today, women in communities around the globe are busy baking up new traditions.

Last Wednesday, a group of 150 local women piled into the Jewish Community Center of Minneapolis for the first annual Twin Cities Mega Challah Bake-off. The bakers ranged in age from a group of BBYO pre-teens to elderly grandmothers. They rolled up their sleeves, donned aprons and set their hands a’kneadin, using pre-measured ingredients.

“We started with a goal of 100 women and hoped that with a lot of effort, maybe, maybe, we would get there,” laughs Mrs. Rivka Grossbaum. “And the numbers just flew right past.”

In the weeks leading up to the bake-off, the registration page on ChabadMinneapolis.com featured a changing tally highlighting the event’s goal and the number registered. As it became obvious that the ambitious target was to be reached, and then surpassed, women stopped Grossbaum on the street: “Did you reach the goal?”

According to Mrs. Sandra Schaffer, who helped coordinate the event, for at least 100 of the attendees, the event was their first exposure to Chabad. “They would never have walked into Chabad before,” she says, “they had no idea what it was.” Schaffer was introduced to Chabad of Minneapolis almost two years ago. She hosted a challah baking session in her home, with Grossbaum leading, and decided then to bake her own challah for Shabbat each week. She has not bought a commercial challah since.

It was the memory of Rivka Holtzberg, whose yahrtzeit is fast approaching, that spurred Mrs. Rivka Landa to begin Flying Challahs in the St. Louis community. She kicked off the project with a large challah-baking event and challah bar, aptly called Rivkie’s Table. Each week, people can request that Landa bake and deliver two challahs to the recipient of their choice, via Chabad’s website. Come Friday, Landa bakes up to 10 pairs of challahs for different members of the community.

One of the program’s goals is to spread the word about Shabbat, in the hopes that people will join with their families to share a Friday night meal. Since she began, recipients call Landa regularly, looking for her recipe. Many women have been inspired to start baking their own challahs. “Sometimes when it gets stressful, I think, Rivkie baked 200 challahs every week. I can handle this.”

While 150 individual pats of dough were rising in their tins last Wednesday, Grossbaum encouraged the audience to give their second challah to someone “who needs a little warmth.” Women are encouraged to visit Chabad’s website to share the story of their challah’s journey. In the few days since the event, numerous personal accounts have flooded in. “It is important to see the ripples of how we can affect the community,” she says. “After all, nurturing others is one of the woman’s roles.”