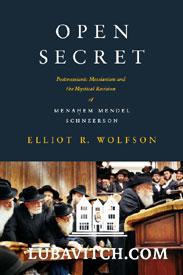 All News
By Shmuel Klatzkin

(lubavitch.com) The academic world hasn’t always been friendly to Chasidism or Kabbala. Nineteenth-century Enlightenment scholars derided them as “mystical cobwebs,” and dismissed them as unimportant or harmful sidetracks in the evolution of Judaism. Twentieth-century academics began to recognize the importance of Jewish mysticism in Jewish life, but still held it at the arm’s length their notion of objective detachment required. Alternatively, some embraced it, but as something unrecognizable to most of its adherents.

On the other hand, Jewish mysticism expressed for its part great distrust of the “free-thinking”  mind. R. Schneur Zalman of Liadi taught in Tanya that our minds can sort through the mess we make by giving in to physical cravings and turn us back to make amends. He warned, however, that if we allow our minds to become polluted with ideologies, they lose that natural function and instead lock us into an exile from G-d. Only if the philosophical mind accepts its role as a powerful tool in G-d’s service rather than as a co-divinity should it be respected, he teaches.

How then can the two come together? Most often, not so fruitfully. Learned, practicing Chasidim and Kabbalists often find academic writing reductionist and tendentious, its criticism and analyses only grasping the externalities of their beliefs. What is missing is the central point, the living relationship with G-d which alone integrates all the various intellectual, emotional and executive details of their life into a living and coherent whole. The response has often been the rejoining of the polemical war from the other side. The result of this is a dimming of expectations that there can be anything other than a culture war, any discourse other than polemics.

Eliot Wolfson’s Open Secret marks a positive advance in academic treatment of Jewish mysticism. He understands that the worth of the entire enterprise of academic study of Jewish mysticism depends on getting what makes it tick. He is too deeply influenced by Rosenzweig to believe that he can merely catalog Chasidism’s externalities and succeed in accounting for it thereby. Accordingly, as he seeks to account for what he deems a mystical revision of Judaism in the teachings of the Lubavitcher Rebbe, he must enter into revision himself.

Wolfson goes to the heart of the matter and attempts to convey the nub of what makes Jewish mystical thought distinctive. He identifies as crucial the doctrine of hitkallelut, the comprehensive inclusion within the divine reality of things which seem contradictory to the naïve observer.

Wolfson looks at many antinomies of thought—dark/light, transendence/immanence, particular/universal, passive/active, male/female—and notes how Jewish mystical thought sees all these apparent opposites grounded in the same, singular, integral divine unity. He does not stop where academes did in the past, categorizing this as pantheism and thereby dismissing it from further discussion. On the contrary, in a bold move, Wolfson is willing to discard even a most hallowed fundament of academic thought, the Law of the Excluded Middle, in order to adequately convey the inner content of Chassidic thought.

Aristotle taught as axiomatic that one cannot both assert and negate the same thing about any thing. It makes no sense to say that if object A has some green on it that, simultaneously, it has no green on it. Either it has or it doesn’t.

But Wolfson sees that, when looking at the origin of things within G-d, all things are together, whether abstract or concrete. There is a black hole of ideas as well, all things collapsing into singularity, to use the terms of the theoretical physicists—and that concept is not in the least far-fetched, inasmuch as some of the founders of black hole theory also spoke routinely of the Information Universe and an equation at some point not only of energy and matter but of all things with consciousness. To deal with this extraordinary reality, he needs a better analytical tool than classic logic.

Wolfson finds the tool he needs in Buddhist thought. Indian thought, whether following its Buddhist branch or the Hindu branch of thinkers like Shankara that go a similar direction, have spent much time and many pages contemplating the collapse of the phenomenal world into a singularity. Human felicity depends on penetrating the ostensible reality of the phenomenal world, for otherwise, one remains a prisoner of illusion. There are more than a few parallels here with Jewish mysticism, and they suggest that a logic that works to explicate reality in the Buddhist parallel system might help to explicate Jewish mysticism.

It is a daring move, for having cut loose from the Aristotelian moorings, Wolfson’s writing often takes on the flavor of sutras or Zen koans. Sentences will often look like impenetrable nonsense, until given a second look to confirm, they deliver a sudden insight, in which all the hidden senses of the concepts emerge fully in place. Here is a crucial example, where Wolfson makes a point he deems so crucial as to serve for his title: that the greatest secret is the one that is open:

…we may adduce the principle that the profoundest mystery is the mystery that is not acclaimed as a mystery, the occlusion that occludes itself by seeming to have nothing to occlude.1

He speaks of this same topic in another way later on:

The ascent culminates in an atheological showing, the disclosure of the concealment that is beyond figurative symbolization, the essence of the Infinite, the utter transcendence that is so entirely removed that it is removed from the very notion of removal, insofar as removal itself implies something from which to be removed…2

There is nothing of the polemic in excerpts such as these, for Wolfson is here, as in so many places in this book, finding an extraordinary way to restate and explicate the teachings of the Rebbe.

The teaching of the Rebbe that Wolfson has focused on is what the Rebbe had to teach about Moshiach; thus, he subtitled his work “Postmessianic Messianism and the Mystical Revision.”  He catches the idea that Rebbe expressed often that with the coming of Moshiach, that this physical world will be home for G-d, and there will no longer be a need for the surface phenomena of the world to obscure His true reality as is the case without Moshiach. But since the world is by nature something which hides, how can it not hide and still be a world? If the world is not a world, then there will not be a world that is home to G-d.

Wolfson approaches this with the emptying metaphors resonant of the Buddhist thinkers. The world, as exemplified by the individual who receives this teaching, must empty him(it)self of its worldliness while still be a world. Each person must brave the storm of self’s end, its collapse into singularity, a self so far removed from what one has understood as self to not be removed, and thus to be constantly present, even in its absence.

This is brilliant, creative and difficult—and perhaps not entirely necessarily so. Wolfson has an academic’s love of abstractions but lacks the Rebbe’s grasp of the continuous grounding of abstractions in the concrete.

Chasidism has from the start stressed the importance of the concrete, in the Baal Shem Tov’s championing of the worth of the simple Jew’s acts of faith. Closeness to G-d was not primarily a matter of one’s adeptness with concepts. Rather G-d is immediately accessible to each and every person, for His governance of the world extends to each and every one of its concrete particulars. In his words, everything that one sees and hears is a divine instruction in life.

This concept of particular divine providence played a central role in the Rebbe’s thought, as in the history of Chasidic thought in general. Its role is to show how one is able to rid one’s self of obstructions to G-dliness, for through this doctrine, the world is nothing less than a revelation, even in its concealments.

Particular providence is not much of a topic in Buddhist thought, or in Shankaran Hindu thought either, for that matter. It certainly is not a topic of any significance in Wolfson’s book. Adding the insight that this crucial topic could provide will give a more accurate picture of the Rebbe’s thought, which in the end was more than just stunningly brilliant and insightful, the way Wolfson portrays it.

This does not need an athletic intellectualism to grasp. Each person represented to the Rebbe a message of G-d, a lesson in his own life. And his seeing peoples’ lives as G-dly lessons empowered people to grasp the G-dly nature of their own existence themselves.

From this vantage point of particular providence, the trouble Wolfson finds with the Rebbe’s doctrine of distinction between Israel and the nations resolves into one more expression of the process of teaching the dynamic of divine integration. In the Rebbe’s teaching and example, the true greatness of Israel, as of any individual, is rapt attention to the dynamic of G-d unfolding in every particular.

No person is thus ever excluded from G-d; even unwittingly all are always an instrument for G-d’s dynamic governance. That is what gives a complete accounting of the entirety of who we are, and not a lesser ego-formation or any attempt to freeze the living G-d into a static image.

The grasping of this as our nature was identified by the Rebbe as the crucial act—it constitutes the coming of Moshiach. So we come to our true self, empty only of that which is other than G-d—which, through the dynamic of particular providence, is nothing at all. So, too, the emptiness of G-d reveals itself as empty only of any barrier between Him and ourselves.

The insights gleaned from Buddhist thinking were not so helpful here; the strength of those teachers was not expressed in a theistic mode. A further study is needed. It will need to acknowledge the full nature of Wolfson’s landmark contributions in this volume and to take advantage of all that Wolfson has accomplished here, while at the same time to take up these various elements which are necessary to transmit the sense of what the Rebbe actually  practiced and taught and transmitted to those who listened to him.

Shmuel Klatzkin is a member of the authors board and editorial board of the Rohr Jewish Learning Institute. He received his doctorate in medieval Jewish philosophy. Rabbi Klatzkin is Associate Rabbi of Chabad of Greater Dayton and director of Project Maimonides.

Elliot Wolfson responds to Shmuel Klatzkin on the lubavitch.com blog.

Related Articles
View All
Books
Book Notes
Scott Frank is a business executive. Yossi Lerman is a Chabad rabbi. Both have been on a quest to find more joy in life.
Books
The Haggadah Collection At The Library Of Agudas Chassidei Chabad
The prestigious Haggadah collection of Chabad’s Central Library began in December 1924, when the sixth Lubavitcher Rebbe, Rabbi Yosef Yitzchak Schneersohn, acquired the collection of…
Books
Hippy In the Mikvah
“The Rebbe encouraged me to continue with the doctorate. I blurted out, ‘But what about the heresy?’ The Rebbe answered: ‘You should write all the…
Books
Book Review: Teaching The Teachers
I spoke to an Israeli kindergarten teacher this summer who explained to me how the philosophy of early childhood education has changed. “Today,” she said,…
Get Inspiration to your inbox!
Newsletter
Join our weekly newsletter for inspiration and updates
Donate
Find Your Local Chabad Center
Subscribe
|
Log In
Chabad
About Chabad-Lubavitch
About Chabad Lubavitch
The Rebbe
Headquarters
Magazine
Magazine
News
News & Updates
In The Media
Impact
Social and Humanitarian
Social and Humanitarian
Education
Education
Community
Community