Award Winning Novel for Teens Based on Chabad Representatives 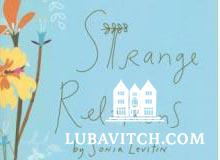 (lubavitch.com) A young adult novel that explores the clash of cultures and budding understanding between a beach-going teen and her Chabad relatives won an important Jewish book award.

This year’s Sydney Taylor Book Award for Teen Readers went to Strange Relations by multi-award winning author Sonia Levitin. Published by Knopf Books in 2007, Strange Relations follows a teenager who is looking to forget her worries, veg out, tan and surf in Hawaii but finds her assumptions about Chasidic Jews and her own relationship with Judaism challenged and changed instead.

According to the Association of Jewish Libraries, which sponsors the award, the gold seal that copies of Strange Relations will wear signifies that the book exemplifies “the highest literary standards while authentically portraying the Jewish experience…We also hope that by educating readers about the Jewish experience, we can engender pride in Jewish readers while building bridges to readers of other backgrounds.”
Levitin, author of over 40 books, drew from her own experiences with Chabad representatives to write the story. A former resident of Bel Air, CA, Levitin based many of her observations of Chabad family life on relationship with Chabad of Bel Air representatives Rabbi Chaim and Charna Mentz. The Hawaii-centric portions grew from a vacation in Honolulu, when she and her husband spent Shabbat with longtime Chabad of Hawaii representatives Rabbi Itchel and Pearl Krasnjansky.

Key scenes in Strange Relations grew from a long Shabbat afternoon conversation with Mrs. Krasnjansky. “Pearl is an absolute dynamo,” Levitin said. “Her stories added a lightness and a humanity to” the serious issues main character Marne faces in the book.

Written for a wide-ranging audience, some passages that describe Marne’s relationship with teenage boys may be deemed be too risqué for reading in homes where value is placed on reserving intimacy for marriage. Levitin said she wrote the book for teens unfamiliar or wary of people dressed in Chasidic garb.

“The next time they see someone in a hat and coat, and girls bundled up in the heat, instead of being disdainful they should look beyond the external, and feel that they can connect,” Levitin said.

Teen book critic Julie M. Prince of Teensreadtoo.com found the book helpful “for anyone interested in exploring different cultures and lifestyles. Marne is a wonderful guide, who gives a thorough glimpse of the life of Chasidic Jews, as seen by a modern teen.”

Levitin who attended Chabad’s Shabbat services in Bel Air during the years she lived in the neighborhood, spoke at several Chabad of Bel Air banquet dinners. In one talk, Rabbi Mentz recalled, Levitin revealed her appreciation for observing Judaism when she told banquet guests, “The question is not why are we involved in Judaism, the question is why not?”

That turns out to be the very same question Marne asks herself throughout the book. Marne confronts issues of faith and is at turns questioning, angered and appreciative of the life her aunt and uncle choose to lead.

“Marne is me in a different incarnation. I know what it is like to be confused and look for my identity and search for G-d,” said Levitin.

This is not the first time Levitin has addressed matters of faith. Her book The Singing Mountain (Simon and Schuster, 1998), also a Sydney Taylor award winner, took on a teenager’s decision to live an orthodox lifestyle after visiting Israel. Currently, Levitin is at work producing a musical based on one of her books. She also has two new books in the works. In one Levitin has a teenage daughter of a woman who converted to Judaism finding her way through religious and emotional conflicts using the return to Israel from the Babylonian exile as a backdrop.

Related Articles
View All
Books
Book Review: Teaching The Teachers
I spoke to an Israeli kindergarten teacher this summer who explained to me how the philosophy of early childhood education has changed. “Today,” she said,…
Books
Book Review: My Story
My Story: Forty-one individuals share their personal encounters with the Rebbe, Published by Jewish Educational Media
Books
Keeping That Daily Appointment with G-d
What these books will do is give you the roadmap to find your own “Mezherich” so that you too can learn how to daven.
Books
Chabad of Berlin Publishes German Prayerbook, Marks Holocaust Remembrance Day
A new German-language siddur makes the Jewish prayer book accessible to modern German speakers.
Get Inspiration to your inbox!
Newsletter
Join our weekly newsletter for inspiration and updates
Donate
Find Your Local Chabad Center
Chabad
About Chabad-Lubavitch
About Chabad Lubavitch
The Rebbe
Headquarters
Magazine
Magazine
All Magazines
News
News & Updates
In The Media
Impact
Social and Humanitarian
Social and Humanitarian
Education
Education
Community
Community