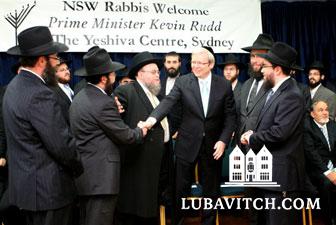 “I am proud to be giving my third address to the Yeshiva community in Sydney; first as Opposition Leader at the Yeshiva Gala Dinner in 2007, then as Prime Minister at this year’s dinner via a video message and today in person at the Yeshiva’s central premises,” the Prime Minister told the crowd.
On receiving the pure Silver Menorah, handcrafted by the Hazorfim Silversmiths in Israel, the Prime Minister said, “The Menorah is a symbol of light. It is about the Jewish people’s tradition, in the words of the biblical prophet Isaiah, of being “a light unto the nations” and illuminating this world with acts of goodness and kindness.”
“It is very apt that the emblem of the Yeshiva Centre is the Menorah, because the Yeshiva epitomizes those acts of goodness and kindness that serve as a force for good in the world.”

With Chabad centers in the CBD, St Ives, Redfern, Dover Heights, Bondi Beach, Double Bay and many other locations across NSW, Chabad is well recognized for its outreach activities.

The Prime Minister commended the Yeshiva Centre's numerous social justice and welfare initiatives such the Yeshiva Welfare Fund which helps people in financial distress, the “Gift of Life” program which recruits people to the Australian Bone Marrow Registry to assist Leukaemia patients and Yeshiva’s Chaplains in the Australian Army, Police, Ambulance, Hospitals, Airports and Jails.

The Prime Minister made mention of Yeshiva’s “Our Big Kitchen”, which he toured on the premises, and praised its humanitarian function of preparing food to help those in need and supporting Emergency Services Personnel.
The Prime Minister wished the guests a “Shabbat shalom," a peaceful Sabbath and reaffirmed his friendship to the Australian Jewish community and Israel with the words “Am Yisrael Chai."

He congratulated Yeshiva’s spiritual Dean Rabbi Pinchus Feldman and his wife, Rebbetzin Pnina Feldman, who this year mark their fortieth year as leaders of the Yeshiva Centre and Chabad in NSW.
In a moving ceremony, Rabbi Feldman blessed the Prime Minister, reciting a prayer for the nation's leaders, delivered on the Sabbath in Synagogues throughout Australia.

The audience heard the traditional Aboriginal welcome from Indigenous Waverley Councillor, Dominic Wy Kanak, was entertained by students from the Yeshiva College choir and watched a video on the work of the Chabad Movement worldwide and the Lubavitcher Rebbe.
This was the second high profile visit to the Yeshiva Centre in the past few months.

The new school is an innovative concept in Jewish Education and a first in Australia, incorporating Jewish teachings with NSW Board of Studies curriculum outcomes.