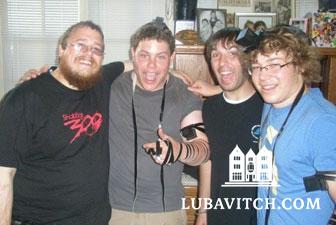 Much of what goes on in a fraternity house is not what the average brother would like to share with a rabbi. And yet, increasingly, Jewish frat houses on campuses are partnering with Chabad.

“Chabad has been very gracious to us, and we like hanging out with them,” said Nathan Pikover, SAM’s president.

Fraternity guys and rabbis, Torah and togas, are not obvious combinations. Rabbi Dov Wagner, director of Chabad at USC, attended yeshivas and rabbinical schools his entire life, where there’s a lot of brotherhood but nary a Greek-lettered sweatshirt in sight. And much of what goes on in a fraternity house is not what the average brother would like to share with a rabbi.

Wittenstein told Lubavitch.com about a SAM brother who suddenly took ill in the middle of a semester. At the hospital, “Who came to help him? His chapter brothers and Chabad. Sammy and Chabad both take care of you like family. They are both home and both places you can turn to for help.”

Chabad welcomed SAM guys to host their Monday night dinners and meetings at their spacious Chabad House, right off of USC’s storied fraternity row. “We are always open to Jewish students hanging out together, strengthening their Jewish identity,” said Mrs. Wagner. “We have a good relationship with all the Jewish Greek houses at ‘SC.”

That SAM, founded by Jewish students at the College of the City of New York back in 1909, is seeking stronger Jewish involvement is indicative of a wider trend, according to Rabbi Wagner.

“Increasingly Jewish fraternities, both the national organization and individual houses, have recognized that their Jewish identity is what makes them unique. Many of them are getting very actively engaged with Chabad and Hillel.” USC’s Jewish fraternities have co-sponsored Shabbat meals and members help set up for last week’s massive Purim bash.

For Pikover, reinstalling SAM at USC gave him and his friends an opportunity to “build the fraternity in our own images, to be Jewish in more than name, to keep the Jewish spirit a little bit more, beyond the stereotypical fraternity craziness.”

SAM, open to “male students of good moral character” of all faiths since 1953, does not compel observance in any way. When the idea of meeting at Chabad was floated, a few students who had never met the Wagners personally hesitated.

“They thought only religious students go there.” To which Pikover replied, “Look at me. The rabbi just wants us to be comfortable and hang out.”

Lounging around at Chabad, all this talk of ‘getting comfortable’, has a purpose, Rabbi Wagner said. “When a student is looking to have a conversation about meaningful issues, they already know us, and we’re there for that crucial interaction.”