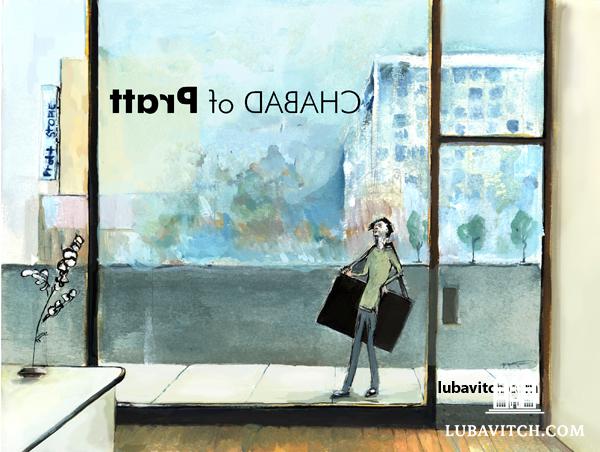 A rendering of the new Jewish Student Center at Pratt by student artist Elke Reva Sudin.

(lubavitch.com) If students build it, students will come.

Before Chabad arrived, it was also the largest Jewish student population without an official organization on campus. Chabad’s current home, housed in the one-bedroom apartment of Rabbi Simcha and Ariella Weinstein, is a 30-minute walk from the Pratt campus.

Clearly, says, Weinstein, “it was time to take things to the next level.” His students agree. The new space is being created almost entirely by members of the Pratt community. The architecture, interior design, murals, and furnishings have been fashioned by students who want to see their Jewish Student Union grow.

“I like for things to be grassroots: by the students and for the students,” the rabbi explains. “When they are involved, a sense of ownership develops. It is like the construction of the Temple in Jerusalem in which everyone had a part. Truthfully, without the students, nothing would happen.”

Brian Schulman is a sophomore at Pratt. Together with another architecture student, Eric Moed, he designed the interior of the Myrtle Avenue storefront. The new building is eco-friendly. “We want to keep the space as simple, raw, and minimal as possible. It will be used for many different purposes,” he explains, “including a synagogue, gallery, event space, and kitchen.”

“The best way to tackle the design problem here was to leave the space open,” agrees Moed, also a second-year student. “The Jewish Student Union’s mission is much broader than simply having Shabbat dinners or services. Our whole message is to fuse our cultural outlook with our Jewish identity, so that they should become one entity. This is the first and only place in this neighborhood where Jewish people can network and build a community.”

Moed’s connection with the area dates back over half a century. His grandfather, Leon Moed, principal at Moed De Armas & Shannon and advisor to this project, graduated from Pratt in 1954. When he attended, explains his grandson, Pratt was a commuter school. “Jewish life on campus did not exist. It is only really recently that Jewish life became available, forget thriving. Now that it is, we want to take it a step beyond. We want to show kids coming out of high school that Pratt is a real, viable Jewish option. We are creating a physical building and they can make it a place to call their own.”

The many students designing its interior are putting a piece of themselves into the structure. “My artistic talents are the way I serve G-d,” reveals senior Elke Sudin. “When I draw I sense that the creative flow is not me, it is coming from a vessel that is greater.” Through her involvement with Chabad on campus, the petite illustrator “reconnected to my spirituality” and has become more religious. She has also made lasting friendships. Sudin met her husband, Saul, also a student at Pratt, during a lunch and learn given by Weinstein. They dated at candlelight Shabbat dinners in the Weinstein home.

These days, Sudin is completing her degree and freelancing on the side. She creates the Jewish Student Union’s promotional materials and is designing a large mural to cover one of the walls in the new space. “Doing something for a greater cause, a good cause, makes my art not just about self-fulfillment,” she says. “It is my personal way of connecting.”

“Brooklyn is the epicenter of a Jewish art renaissance,” declares Weinstein. “It is an incubator for the cultural revival of Jewish life and art. I want this new space to be a gallery to screen movies, host poetry and book readings, and display art. Our students should be able to express their Judaism through the arts.”

As much as the rabbi wants to give his students, it is clear that they want to repay him as well. “I met Simcha the first week of school when he came over to me and gave me a big hug,” recalls Schulman. “Simcha has done a lot for Pratt and the broader Jewish community and I want to contribute in any way I can.” In helping with the design, Schulman wishes that others will benefit as he did. “I hope that people will walk by and notice our place, come in, say hello, and get involved.”
The large glass windows facing Pratt will house a vibrant Jewish student center come fall. But for Weinstein, the new semester has its downsides. “Our first graduating group is leaving this year. They were our first guests, with us when we purchased our apartment. They are really part of the family and saying goodbye will be hard.”

Luckily for him, many graduates are planning to stay in this gentrifying neighborhood near promising jobs in the arts. Plans are already underway for alumnae events at the new center.

“They will always be part of the family,” promises Weinstein.

Related Articles
View All
Chabad Campus Rabbi Takes Award For Book on Comics
“For most of my life I’ve lived a Clark Kent existence . . . my desire to assimilate required no less.” So begins Up Up…
Campus
Two Universities React as Antisemitism Steps Out of the Shadows
While college administrators debate the limit of free speech, Chabad campus leaders take action.
Campus
Popping Bottles With Intention
“I’m still popping bottles, but instead of popping them at a bar or nightclub, it’s at the Shabbat table. It’s the same hustle but with…
Campus
Israeli Minorities Find A Platform at Stanford University Chabad
Less than twenty-four hours before it was due to begin, an event scheduled to take place at Stanford University’s Hillel facility earlier this week was…
Campus
In Irma Aftermath, Campus Chabad Stays Put and Open
"A disaster like Hurricane Irma can be frightening, but it also brings people together and highlights the wonderful community on campus."
Get Inspiration to your inbox!
Newsletter
Join our weekly newsletter for inspiration and updates
Donate
Find Your Local Chabad Center
Chabad
About Chabad-Lubavitch
About Chabad Lubavitch
The Rebbe
Headquarters
Magazine
Magazine
News
News & Updates
In The Media
Impact
Social and Humanitarian
Social and Humanitarian
Education
Education
Community
Community