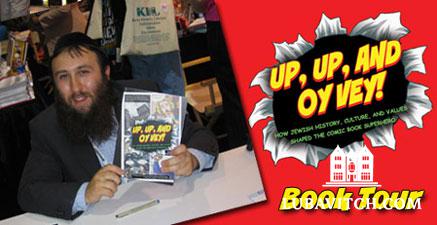 “For most of my life I’ve lived a Clark Kent existence . . . my desire to assimilate required no less.”

So begins Up Up and Oy Vey: How Jewish History, Culture and Values Shaped the Comic Book Superhero (Leviathan Press), a new book by Rabbi Simcha Weinstein that recently won the prestigious Benjamin Franklin Award for excellence in independent publishing.

From Superman to Spiderman, Weinstein’s book teases out biblical archetypes contained in the personalities of the superheroes, and points to spiritual lessons that can be learned from comics.

Though quintessentially American and secular, comics were by and large the product of the Jewish immigrant imagination. Many of the early creators of comics were Jews who changed their names from Kirtzburg to Kirby and from Kahn to Kane, and created stories about individuals with dual identities who wear masks and work heroically for truth and justice in the world around them.

Perhaps the most obvious inspiration for a comic book superhero is Moses. As Weinstein points out, "Superman leads a double life as the stuttering, spectacle-wearing reporter whose true identity no one suspects. In the same way, for his own safety, Moses kept his Jewish roots hidden for a time."

In one of the most dramatic moments in the history of comics, Captain America was depicted punching Adolf Hitler across the face, before America had even declared war on Nazi Germany.

Many decades since the debut of the American superhero, academic institutions and scholars have begun to devote more serious attention to the comic book, giving it new currency as an important genre in the American literary tradition.

Up Up and Oy Vey follows the trajectory of comics to the present day graphic novel and its authors, Jewish writers with names like Art Spiegelman and Ben Katchor, who no longer feel the need to hide their identity in order to convey their messages.

For Weinstein, the inspiration to write this book came from his own childhood experience in Manchester, England, where he grew up “intent on blending into the modern, secular world.” Though he went on to pursue a degree in film and later held a job scouting movie locations, Weinstein eventually felt he had nothing “real and true to fall back on” and he turned to Judaism, which, he found, contained all the “inspiration and excitement movies had once represented to me.”

Now Chabad’s representative to Pratt Institute, Weinstein says he had no intention of creating a bestseller book. Instead, he was looking for a medium through which to connect with students at this leading arts school.

“My job is to show how Judaism can be found everywhere,” even in, of all places, comic books for kids.

Since the book’s realease, the Jewish Student Foundation at Pratt, with a decidedly unaffiliated Jewish student body of about 800  has noticeably grown, with Weinstein and his wife Ariella becoming popular with students and the school itself. Recently, Weinstein received the Outstanding Organization Advisor Award from Pratt, in recognition of his service to the Jewish Student Foundation on campus.

More importantly, though, Weinstein has found a way to reach students who arrive at the university with little or no Jewish awareness. Saul Sudan, a recent alumnus of the Pratt Institute says of his involvement with Chabad: “We connected over comedy and comic books.” Sudan sees Weinstein’s book as valuable for what it has to say about something that so many see as mundane. “The fact that their creators were Jewish is a very direct link,” he says, “and the fact that this book deals with comic books, which are the product of secular culture, but also ties it into the Torah world and to Torah concepts can enlighten people to Torah itself.”

On a more basic level, Weinstein’s book illuminates some of the universal issues that are illustrated in comic books. The book resonates particularly well with students living away from home challenged to address questions of identity and moral ambiguities on secular campuses in America today. The message of Weinstein’s book, says Elky Engel, an illustrations major at Pratt, is that the superhero’s struggle is a universal one, and that the creators themselves were “people just like us . . . lost, wandering and looking for ways to cope” in their world.

In the end, Up Up and Oy Vey is a call to action. The story of the superhero is the story of a courageous character who devotes him or herself to the service of others, as an agent of positive change in the world.

Weinstein concludes his book with a request: “I implore you to tap into the real you, the un-erasable you, the ‘superhero’ you. Go out into the world. Save a cat from a tree. Better yet, save the world, in Spandex or not.”