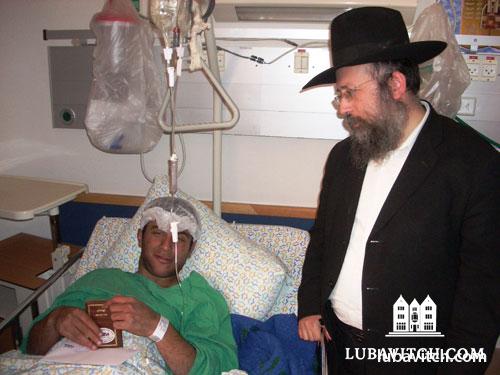 A Chabad representative visits one of IDF’s wounded, Sunday.

All News
By Zalman Nelson , ISRAEL

(lubavitch.com) As Israeli Defense Forces began the long anticipated ground operation to end rocket fire into the Southern communities, its soldiers are penetrating Gaza's dangerous interior and Chabad representatives are intensifying their own support efforts both for the soldiers and Israel's southern residents.

IDF sources confirmed one fatality, St. – Sgt.Dvir Emmanueloff, 22, of Givat Zeev. Emmanueloff died of wounds sustained in a mortar shell attack near Jabalya in the Gaza Strip on Sunday.

Chabad's representatives in Givat Ze'ev, Rabbi Chaim and Ayelet Bachar received the news of Dvir's death with shock. They knew him personally, as Dvir was a student of Rabbi Bachar's in elementary school. "He was an outstanding student," says Rabbi Bachar. Emmanueloff will be buried Sunday night at Mt. Herzel.

IDF reports that 54 soldiers were injured, including four seriously, during Sunday's actions. Twenty one Israeli soldiers were hospitalized in Siroka Hospital in Beer’sheva and Tel Hashomer outside Tel Aviv. Chabad’s Terror Victims Project's Rabbi Menachem Kutner was joined by Rabbi Zalman Gorelik of Beer Sheva and Rabbi Levi Gopin of Tel Hashomer, making the rounds among the soldiers, providing services to family members, and offering support. Rabbi Kutner emailed the names of the wounded soldiers to Chabad representatives worldwide, who are leading prayers in their communities for their speedy recovery.
“The soldiers are recovering and in good spirits,” said Rabbi Kutner after his visit to Siroka. “We helped them and their family members with whatever immediate needs they had." Kutner also said he and the other Chabad representatives "let them know how appreciated they are,” at this critical time. Indeed, the strike against Hamas has widespread popular support in Israel, after frustrations at the mounting rocket attacks on its civilian population by Hamas.
The advent of ground fighting is particularly difficult for the parents of soldiers, who have not had contact with their children since the army collected soldier's cell phones prior to the ground incursion to prevent security leaks. Margolit Mogilevsky of the Chabad community in Thornhill, Toronto said she last spoke to her son, Levi Yitzchok, a 19 year old soldier with the special forces and paratroopers, before Shabbat.
“He said we wouldn’t be able to reach him for a few days. I know we are doing what we have to do, but, for me, it’s not a good experience,” she said. “All I can do is pray to G-d.”
Mrs. Mogilevsky told Lubavitch.com that her son and many other soldiers received extra clothing, food packages, and various other needs from the many Chabad representatives visiting the front lines in the days leading up to the ground invasion.
Many Shluchim have increased their supportive efforts since Saturday night, travelling up to the front lines. Rabbi Mendy Ofen of Ohr Lachayal, a Chabad agency which provides religious services and products to soldiers, has been outfitting soldiers with a specially crafted prayer book, Tehillim, Torah and mini charity box combination that soldiers can tuck into their gear for extra protection.
“We bring them food and emotional support, offer them an opportunity to put on tefillin, and show them with our actions that we are with them every step of the way,” said Rabbi Ofen.

ON THE HOME FRONT

On the home front, the Chabad Terror Victims Project sent hundreds of gifts to the children of hard hit Netivot on Friday. Confined to shelters since the war began, children and parents rejoiced as Rabbis Isser Edrei, Benyamim Fodorovski, Yisrael Lipsch made the rounds of the city’s shelters to deliver the gifts which included games and children’s stories of faith in difficult times.
Throughout the Sabbath and on Sunday, residents of the South stayed in shelters away from the missile onslaught. In heavily hit Ashkelon, Rabbi Menachem Liberman met with the mayor Benny Vaknin and local officials on Friday to discuss the status of the city’s shelters and what additional services are needed. Last week, Rabbi Liberman bused his local yeshiva students north to Kiryat Atta to continue their studies in an alternative facility. Younger children, however, have been learning in various shelters throughout the city.
“We are trying to stock up in the shelters for times when kids and families need to be there for extended periods of time,” said Rabbi Liberman. “We’re gathering food, games for the kids, getting ready since the home front command raised the alert level.”
Rabbi Liberman told Lubavitch.com that the synagogue was almost empty on Shabbat and the streets quiet. While the rockets increased, so have the miracles, including a rocket which went through the window of a Russian immigrant family’s apartment. Despite the damage and explosion, the family, who was in another room, escaped harm.
“People are scared and nervous. Some hear the sirens and panic each time that they are going to be hit.”

Related Articles
View All
Features
Anatomy of a Law
Most commandments in the Torah are so cryptic that a straightforward perusal will leave the reader without the knowledge necessary to understand or fulfill them
Features
I Will Learn It on a Train, I Will Learn It in the Rain
What was once the province of an elite few is now available for free online in every language
Features
Memories of the Heart
Elisha Wiesel speaks with Lubavitch International about his famous father and raising his children to love Yiddishkeit
Features
From Dealing Drugs To Writing Scrolls
It took years in and out of physiatric wards, and several close brushes with death at the hands of mafia-hitmen and street toughs before Jordan…
Get Inspiration to your inbox!
Newsletter
Join our weekly newsletter for inspiration and updates
Donate
Find Your Local Chabad Center
Subscribe
|
Log In
Chabad
About Chabad-Lubavitch
About Chabad Lubavitch
The Rebbe
Headquarters
Magazine
Magazine
News
News & Updates
In The Media
Impact
Social and Humanitarian
Social and Humanitarian
Education
Education
Community
Community