Working with authorities and the Israeli Embassy, Chabad has arranged a special flight to bring home the body of a young Jewish father killed in Kazakhstan 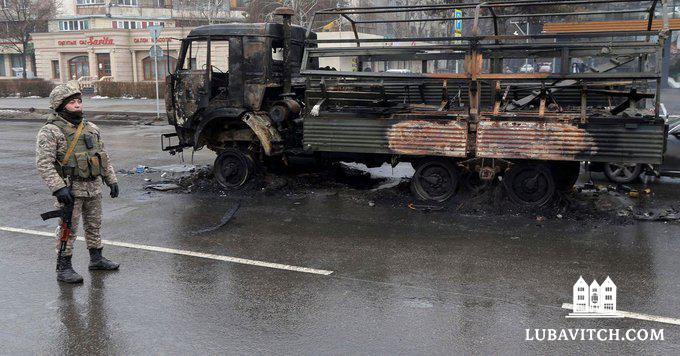 As Kazakhstan’s capital city, Almaty, locks down in the wake of large-scale anti-government protests, the country’s Jewish community is staying at home and praying for peace.

Initially sparked by rising fuel prices on January 1st, the unrest ballooned until thousands of demonstrators stormed government buildings and seized the Almaty airport. The Kazakhstani government stated on Sunday that the situation has been “stabilized.” Some 164 people have been killed in the unrest, and thousands more have been detained.

Kazakhstan’s Chief Rabbi Yeshaya Cohen said the country’s Jewish community is sitting out the conflict. All eight synagogues in the country have suspended activities to avoid endangering congregants. Rabbi Cohen told Lubavich.com that curfews are in place, and people do not venture out into the streets at all. “Even during the daytime, we only leave our homes for emergencies,” he said.

On Friday, one such emergency occurred when 22-year-old Mr. Levan Kogeashvili was shot and killed near his home. According to a statement by Yahad.ru, Chabad of the FSU’s youth group, his car came under fire while driving to work. He was taken to a hospital but passed away from the two bullet wounds he suffered. Braving the warzone-like streets, a small crowd gathered in the courtyard of the Beit Menachem synagogue in Almaty for his funeral.

An Israeli national, Mr. Kogeashvili came to Almaty several years ago to study. He joined Chabad’s Yahad youth group, and married a young woman he met through Yahad. Eight months ago, the couple welcomed the birth of their first son. In a statement on Monday, Yahad expressed “ our most sincere condolences to Levan’s family, his parents and his wife Sarita” on behalf of the entire Yahad movement. “Lev was a very warm person.” Said Rabbi Shevech Zlatapolski, director of the Jewish Community of Almaty. “He came to services and his family stayed close to the community, his loss has devastated us.” he said.

Although Almaty’s airport has been closed indefinitely, Chabad is working with Kazakhstani authorities and the Israeli embassy to secure permission for a special flight to carry Mr. Kogeashvili’s body to Israel for burial. “With G-d’s help, we hope he will be flown to Israel today,” Rabbi Cohen told Lubavitch.com in the early morning hours of Monday, January 9th.

Rabbi Cohen expressed gratitude to all those who have been praying for the wellbeing of the Kazakhstani Jewish community. “The situation is calmer now,” he assures, but says that over the course of the uprising, “enormous damage was done to shops and warehouses belonging to the Jewish community.”

“Whatever happens, Chabad will be here to serve the community. We’re not leaving,” says Rabbi Cohen. “Kazakhstan has always been a peaceful nation, and I pray for the restoration of peace. Please continue praying for the safety and wellbeing of our brothers and sisters in Kazakhstan,” he says.