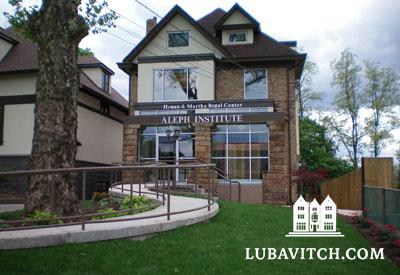 (lubavitch.com) Pennsylvania, home of the U.S.’s second highest number of federal prisons, right after Texas, sees more than seven out of ten inmates return to prison after release. High rates of re-incarceration are overcrowding prisons, tying up the courts and pushing government officials to find a way to break the street-crime-jail cycle.
Proposed solutions include job training, alcohol and drug addition counseling, and faith based intervention. On May 22, The Aleph Institute – North East Region, Hyman & Martha Rogal Center, celebrated the grand opening of its new home in Pittsburgh’s Squirrel Hill neighborhood, where all these services are now offered, under one freshly renovated roof.
Three hundred people a week have begun filling the 4000 square foot space, taking advantage of the counseling and substance-abuse recovery services available in the center. Since the building became Aleph’s home, even before the official opening, the numbers showing up for post-incarceration services have been climbing.

“When you put the center in the public’s eye, when you make it a respectable, comfortable place to go to, people come,” said Chabad-Lubavitch representative, Rabbi Moshe Mayir Vogel, executive director of Aleph Institute – North East Region.

The program is affiliated with Aleph Institute based in Florida, but is independently funded. Local donors raised the $1 million it took to purchase and renovate the center.

More space means Aleph can offer more, he said. Already the center’s 500 square foot lending library has been bringing Jewish reading material to the 2000 Jewish inmates visited by Aleph’s 42 area volunteers each year.  On a practical level, the new center also allows Aleph to store the pallets of grape juice, matzah and the religious items it provides to inmates before Jewish holidays around the year.

Future plans for the space include offering a job-training program to former inmates. Finding stable employment is crucial component in an inmate’s transition back into society.

“People become very dependent on the Bureau of Prisons. I’ve seen people in prison for years make poor decisions because they have nothing to go back to and few prospects for the future,” said Mordechai Rosenthal, an Aleph volunteer who’s been visiting inmates every week for the past fifteen years.

The new building, a step up from the rented facilities used by Aleph since 1991, is also the central address for Jewish inmates in need of assistance during their sentence.  Rev. Ulli Klemm Administrator for Religion and Volunteer Services with the Pennsylvania Department of Corrections speaks warmly of the relationship he’s developed with Rabbi Vogel.

“It has been helpful to have Rabbi Vogel available to both be an advocate for the Jewish population and to assist me in gaining helpful perspectives and information on holiday observances and the like,” said Rev. Klemm.

When corrections officials were questioning whether a pop-up sukkah booth was a security risk, Rabbi Vogel’s demonstration of its innocuousness gave Rev. Klemm the confidence to permit its use on correctional facility grounds. Through Aleph’s relationship with DOC officials, Jewish inmates have gained the right to have tefillin in their cells. Recently, Rev. Klemm joined the Vogel family for a Shabbat service and meal, as well.

“I have developed a greater, deeper respect and appreciation for the Jewish heritage, and that helps me when I have to respond to requests for religious sacred items for inmates,” Rev. Klemm said.

Shortly before the grand opening celebrations, Rabbi Vogel received a note from a former inmate. He thanked Aleph and the rabbi for their advice, help with kosher food, for providing Seder plates, megillah readers on Purim, and “for working to smooth out the details. You were always our ‘go to’ person in dealing with a difficult situation.”

With a building of its own, Aleph of the North East is positioned to fulfill the Lubavitcher Rebbe’s teaching that no Jew, no matter what his situation, should be left behind.