Agents of Change: Community Leaders and their Special Needs Children 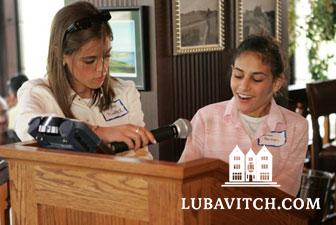 All through her pregnancy with twin girls, Chaya Perman successfully juggled her roles as director of Chabad of Caracas, Venuezela’s preschool, editor of the community magazine, Torah class teacher and mother of six. Discovering that one twin Guitti was born with spastic quadriplegic cerebral palsy forced Perman to make a series of difficult choices. Devotion to the community she and her husband built over twenty years had to be weighed against the reality that Venuezela, a third-world country, offered few resources for children with special needs.

Across the world, at Oxford University, Chabad representative Fraidy Brackman knew something was wrong with her second-born Mendel. Her community, populated by young single students and academics with one or two children, if any, lacked anyone to act as a sounding board or resource for ideas. After Mendel’s pervasive developmental delays – he cannot walk or talk – were diagnosed, the Brackmans struggled to fit in his care while building a vibrant Jewish presence on campus.

When Chanie Deitsch of Chabad of Fairfax, VA, brought her 2-month-old daughter, Cyrel, to the emergency room, she thought she’d be bringing her home that evening. The infant had a heart attack and, now, seven years later, cannot walk, talk or respond meaningfully to her environment. “People asked how G-d could do this to me, and I couldn’t give them pat answers,” said Dietsch.

Experts estimate developmental, mental or physical disabilities affect seven to ten percent of all children. Chabad’s legions of Jewish women leaders generally have large families, stacking the odds that their families will welcome and struggle with the challenge of raising a differently abled child. Doing so while serving their communities presents a set of challenges not well addressed by general parent support groups.

Over the last five years, Chabad representatives who are mothers of children with special needs have shared their stories, suggestions and strategies at workshops at the annual convention of Chabad women leaders. Next month, Chabad’s Shluchim Office, a resource for Chabad’s international network, will launch a password-protected network just for them.

The Special Shluchos network is to be an offshoot of the general Shluchos network, which has over 2000 members and a daily message volume that regularly shoots into the hundreds. Forty shluchos are already signed up for the service, and the number is expected to grow dramatically once word spreads. Though raising a child is a joint parental effort, the Special Shluchos network is for moms only. “We want mothers to be comfortable and open talking to other mothers,” said network manager Chana Piekarski. There’s a parallel general network for men, and a “Special” subgroup could be developed for them if the need arose.

Among the ironies of Chabad community leaders raising special children is the reality that their own children often cannot attend the schools they’ve created. In some cases, their special child becomes an agent of change. After Guitti’s birth, Chaya Perman’s preschool began accepting children with special needs, and the welcome spread to the other Jewish preschool in Caracas. Guitti’s presence gave parents confidence to bring their children with special needs out in the open to attend community functions. Rosy results are not always achieved. One shlucha, a mainstay of her community’s Shabbat gatherings, stopped attending synagogue because her child’s cooing and spastic movements disrupted services.

When the therapist who helped Gitti, now 17, walk immigrated to Toronto, Perman agonized. Unwilling to compromise on their daughter’s care or abandon their community, the Permans decided that Chaya would move to Toronto with Guitti while her husband, Rabbi Moshe Perman, continued their activities in Venezuela. Trusted community members continued Chaya’s work at the preschool, magazine and adult education classes. As her other children aged out of the Jewish schools available in Venezuela, they moved to Toronto to continue their education. “We try to make their lives as normal as possible.”  Several times during the year, Rabbi Brackman leaves Oxford to bring Mendel to Toronto for weeks of therapy, and Feigy steps in to teach his classes and deliver talks at their Shabbat dinners.

The new email group solidifies what had been an informal support network between shluchos in this situation. Perman invited baby Cyrel and Chanie Deitsch’s sister to her home so they’d have access to therapy not available in Virginia. All three women have spent hours on the phone consoling and advising shluchot newly thrust into the universe of special children.

For several years Chanie Deitsch was consumed heart and mind with her daughter’s care, and her role as community leader took a backseat. Her husband, Rabbi Sholom Dietsch, on the other hand, threw himself into Chabad’s growth and brought out new couples to expand their Chabad center’s reach. As the community in Fairfax learned of Cyrel’s prognosis, they began approaching Chanie for advice on weightier issues than before. “After the hardship we’ve been through, I can really empathize with their situations, and they are ready to listen to what I have to share.” With the new network, Chabad’s leading women will have a forum to share that strength and empathy with each other.