After A Polarizing Election, Jewish Women To Share A Shabbat of Unity 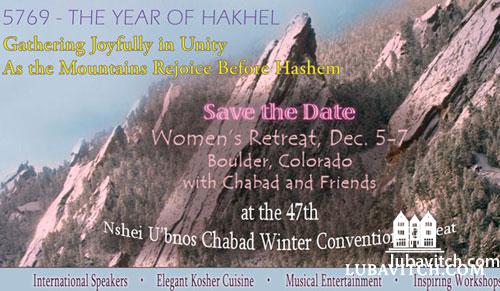 (lubavitch.com) On December 5, Jewish women from zip codes across America and from diverse backgrounds will participate at a Shabbat retreat in Boulder, Colorado.
Coming mere weeks after one of the most polarizing elections in U.S. history that inflamed passions especially among American women,  the convention, sponsored by the women's division of Chabad-Lubavitch, anticipates a weekend of healing. Here, themes of unity will transcend the diverse political and religious affiliations among the guests.
The topics will address issues of importance to modern Jewish women including equality as a value in Torah,  the Chasidic perspective on personal fulfillment in contemporary life, and women's health issues. The program was planned, say convention coordinators, keeping in mind the eclectic nature of the guests.
According to Susan Kramer, Chief Development Officer at the Allied Jewish Federation of Colorado, it is the  cross-mix of participants that makes the convention so appealing and so vital. "The sisterhood of different women is critical to the continuity of the Jewish faith and people," she says.
Chany Scheiner, co-director of Chabad of Boulder, says that choosing Boulder as the  location for this year's conference challenges organizers with preparing a program that will be relevant and inspiring enough to transcend the differences among the participating women. Known to be "nontraditional in every sense of the word," Boulder's liberalism, Scheiner hopes, will result in an "open-minded cross-dialogue and friendship" between the 250 expected guests.
"I love that people from around the country will be attending," says Karen Hammer, radio host and producer of Denver's Mountain Time Heads Up! a public affairs program. "The conference offers substantive programs with excellent topics and a chance to hear other people's ideas and perspectives."
Rivi Feldman, who has been helping to coordinate these mid-winter conventions since 1985 insists that "Chabad welcomes everyone with open arms."
"It does not matter where you are coming from. If you are Jewish, we have something here for you."
Bestselling author Yitta Halberstam (Small Miracles), and Chabad's representative to Sweden, Leah Namdar, are two of the weekend's headliners. Also presenting will be Laya Jackson a parenting expert from Safed, Israel and Rabbi Yossi Chazan, a popular British speaker. Workshops are divided by age and interest: an education seminar includes a class for parents of small children, a focus group about teenagers, and a third discussion that will explore adult education opportunities.
These annual Chabad women's conventions (not to be confused with the International Conference of Chabad Representatives) speak to contemporary Jewish women's interests, but go back almost 50 years. Mrs. Miriam Popack has been coordinating these events since the first one in Boston in 1962.

Well before the age of networking, the Lubavitcher Rebbe sent a group of Chabad women to  Boston, Massachusetts, to network. Well before his representatives served all corners of the globe, she explains, the Rebbe wanted Jewish women everywhere to gain exposure to women's empowerment through Judaism. Mrs. Popack remembers the Rebbe being involved with every detail of the convention through the 1980s.
Last year's convention was in Burlington, Vermont.  Zeesy Raskin, Chabad representative to Burlington says that for her community, the convention was transformative. "It is not just the delicious food or the inspiring speakers; it is the fact that women are uniting that makes the experience so powerful."
The key theme of the conference, unity, is not simply a mantra; it manifests throughout the weekend's program. The idea is based on a Biblical passage imploring the nation to "gather joyfully in unity as the mountains rejoice before G-d."
The retreat will also provide its guests, many of them hard-working professionals and mothers, a chance to relax: swimming, massages and manicures, and outdoor activities will offer informal opportunities for women to become acquainted.
Karen Hammer, the radio host, is a member at a local reform temple, but attends Jewish Learning Initiative, JLI classes at Chabad. She expects it to be a fulfilling experience based on her exposure to Chabad of Boulder's educational activities.
"Everything I have attended at Chabad is accessible," she says. "Everyone is engaged, regardless of their level."