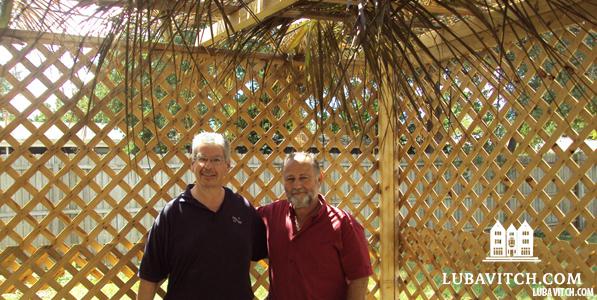 It’s been decades since Ginsberg and Schechter had any contact.

(lubavitch.com) When Howard Schechter was invited to join his community Chabad at the first Sukkot meal, he gladly accepted, unaware of just how literally the holiday’s message of unity would apply to him.

In fact, local Chabad Rabbi Alter Korf was equally unaware. He was downright worried about the 25 guests he’d invited. Rain had fallen earlier leaving the interior of the Sukkah damp, and with the lights blown, dark too.

But there, right under the palm fronds of his Sukkah roof, an unexpected reunion dwarfed all his concerns.

Schechter noticed a familiar face when he entered the Sukkah with the other guests, but he could not be sure of the man’s identity. Then he heard someone mention the name Ed Ginsburg.

“I went over to him and asked him whether he used to live in Rockland County, and if he remembers a certain Howard Schechter,” Schechter told lubavitch.com.

It’s been decades since Ginsberg and Schechter, now hugging each other, had any contact. Having met at Schechter’s wedding in 1978, they became fast friends. Then life got in the way, and although they corresponded regularly at first, the last time they connected was in 1987.

In the Sukkah, aglow with candles that had been lit in honor of the festival, Rabbi Korf intoned the Kiddush blessings over the wine, and Ginsberg and Schechter began a trip down memory lane.

“The, candles, the slight rain, this all set the tone for this beautiful reunion,” Rabbi Korf observes. “There was this positive energy in the Sukkah—this wonderful feeling that gave the whole night a powerfully good feeling. All the challenges, the rain and the lack of proper lighting, this all contributed toward a beautiful night.”

Rabbi Korf spoke about the message of Sukkot, and its symbolic representation of Jewish unity. And for Ed, who had never been in a Sukkah before, the message was especially meaningful. “It was just so special for me to meet Howard after so long, and it was extraordinary that it happened in the Sukkah, where we all sit together in unity,” he said.

Since moving to St Petersburg eight, years ago, Rabbi Korf always built his Sukkah in the backyard of his house, which was small, and allowed him to invite only a small number of guests.

This year, however, Korf decided to take a somewhat daring move in a town where such booths aren’t commonplace and build his Sukkah in the front yard, where he could comfortably host many more.

A good move, says Korf, certain that when it comes to mitzvahs, like sharing the holiday with others, more is always better. “There is no way Howard and Ed could have possibly met had I not expanded the Sukkah this year.”

Though he has been feeling the economic crunch, Schechter takes this event as a sign from G-d. A chef by trade, he has put his culinary skills to use at Chabad in St Petersburg many times in the past.

“I help Chabad because it’s a Mitsva, and I believe that this reunion is a good sign from G-d that things will improve,” he says.