A Woman, A Prayer, A Shofar at the Grand Canyon 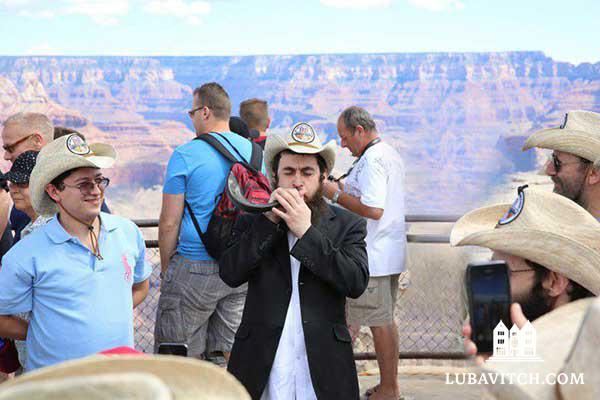 It has become a yearly adventure for the large group of Muscovites who travel to the United States before the High Holidays. Organized by the Marina Roscha Beis Menachem synagogue and Chabad center, the trip takes visitors, among other places, to New York to the gravesite of the Lubavitcher Rebbe, his study and personal home, where they explore his teachings and life and where they pray for their family, their community and Russian Jewry before the new year.

This year, the Grand Canyon National Park in Arizona was also on the itinerary. The natural beauty of the environment was an ideal setting for the contemplative and introspective mood of the pre-Rosh Hashana days, and the group prayed the mincha services at the foot of the Grand Canyon. Inspired by the Canyon’s scenic backdrop, Rabbi Yitzchok Valodorsky, sounded the shofar blasts as is customarily done during the days before Rosh Hashana.

The sounds drew the attention of a woman who happened to be nearby. She approached the group and asked if they would blow the shofar once more. After the shofar was sounded again, Rabbi Berel Lazar, the chief rabbi of Russia, who joined the trip, spoke to her, and suggested that she go to shul on Rosh Hashana, where she could observe the mitzvah of hearing the shofar on Rosh Hashana.

The woman then phoned her mother excitedly, telling her that she met a rabbi who blew shofar just for her, and blessed her for the new year. Now her mom wanted to hear shofar, and for the third time that morning, Valdorasky blew the shofar again, this time with the woman’s mom watching via skype.

Grateful, the woman offered to share her story: “For the past seven years I have been very sick and have not left the hospital and my home. Today is the first day that I ventured outside. I chose this beautiful place to spend my day, to look at the wonders of G-d’s creations. On the way here, I prayed to G-d to show me an encouraging gesture.”

Hearing the shofar, she said, she felt “that G-d has answered my prayer and I will listen to you and pray in Chabad center.”