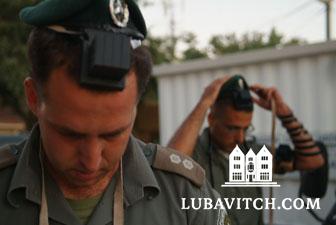 At army bases in Israel, soldiers welcome the invitation to bind tefillin.

In the months before the Six Day War earned its name and blazed into the history books as an open miracle, pundits were predicting a decimation of Israel, a second Holocaust. Troops from Syria, Egypt, Lebanon, Saudi Arabia, Kuwait, Jordan and Algeria massed for an attack on the Jewish land. On June 3, 1967 – two days before fighting began – the Lubavitcher Rebbe Rabbi Menachem M. Schneerson, of righteous memory, announced what was regarded as a radical step: Every Jewish man – no matter where he was, no matter his level of religious observance – should help safeguard Israel by putting on Tefillin.

Most war efforts surge and fade and fray like so many threadbare yellow ribbons tied round old oak trees. But 40 years later the “Tefillin Campaign” is roaring ahead. In four decades, the ancient practice, alluded to in the Torah and described in the Talmud, grew into a trademark of Chabad-Lubavitch outreach and has been revitalized as a valid channel for authentic Jewish spiritual connection.

Rabbi Joshua B. Gordon, now executive director of Chabad of the Valley, CA, was a teenager attending Chabad’s rabbinical college in Brunoy, France, when the Rebbe announced the Tefillin Campaign. Zealous to fulfill the Rebbe’s words, Rabbi Gordon and his friends stood on street corners and outside banquet halls where Jewish weddings were celebrated, pairs of Tefillin in hand. “People would line up by the hundreds and wait to put on Tefillin with us. That is the extent of the awakening brought on by the imminence of the Six Day War.”

Then the first shells fell. The Rebbe issued telegrams to Israeli soldiers urging them to put on Tefillin, usually an a.m. ritual, at any time they could spare. Tefillin would strengthen them. Shield them. The Rebbe quoted a biblical commentary that said, in essence, that the mark of Tefillin would demonstrate that they were “Jewish soldiers whose leader is God.” As a consequence, enemies “shall fear you and they shall run from you in seven directions.”

Within a week, Jews around the world marveled and celebrated. Years later, a former Israeli soldier who fought Egyptian forces at the Suez Canal recounted an object lesson in the power of Tefillin to Herbert Weiner, author of Nine and a Half Mystics. In a 1999 Jewish News article, Weiner described how Israeli officers found notebooks left behind by Egyptian soldiers who observed a strange daily occurrence through their binoculars. Israelis donned black boxes on their heads and arms that the Egyptians guessed “were secret weapons, perhaps a kind of radar-receiving device, detecting signals that could not be picked up by other known instruments.”

The war was over but the battle for Tefillin had just begun. The phone rang in Rabbi Kasriel Kastel’s Brooklyn apartment at midnight. A newlywed studying in Chabad headquarters’ kollel, post-graduate rabbinical school, Rabbi Kastel received the news that he had been tapped to head the Tefillin Campaign with some surprise.

Armed with a list of hospitals, nursing homes and colleges, the young rabbi, now program director of Lubavitch Youth Organization, dispatched volunteers. Most were guys barely in their twenties, jumping at the chance to fulfill the Rebbe’s wishes. Among them were venerable Chasidim, equally motivated to make a difference.

Rabbi Sholom Ber Gordon, a Chabad representatives sent to New Jersey by the Rebbe’s predecessor, devoted his life to Tefillin. He kept a pair with him at all times, and helped thousands of Jews use them, especially in his work as chaplain for 30 years at St. Barnabas Hospital and 40 years at Beth Israel Hospital. Hospital administrators, doctors, patients, visitors, most were won over by Rabbi Gordon’s warmth and sincerity. And when that didn’t work, the rabbi had an answer why he wanted perfect strangers to put on Tefillin: “I’m a Tefillin addict.”

In the early days, flack against the campaign came from all quarters. Critics wondered if presenting uninvolved Jews with such holy objects demeaned the ritual. Furthermore, how could yeshiva students be trusted traipse among immodestly dressed crowds and not be led astray? The Rebbe devoted many talks to explaining the power of Tefillin, it’s potential to reawaken Jews to their heritage.

Slowly, slowly, Tefillin emerged from obscurity. Prior to the campaign, the New York Times’s only mention of Tefillin came in a Lost and Found notice in the June 18, 1959, issue. By May 1968, a brief article juxtaposed the hippies in Washington Square Park with Chabad’s booth there that promised ‘Tefillin on the Spot for People on the Go.’

Rabbi Samuel Schrage, a member of NYC Mayor John Lindsay’s New York City Youth Board, was quoted saying: “It’s time to return to a proven old philosophy. Young men, especially Jewish young men, are searching for the mystic experience like LSD and pot and gurus and maharishis. We can give them mysticism.” Four years later, an overseas dispatch in the paper of record trumpeted the Israeli army’s funding of two planes to transport 55 Chabad Chasidim to bring Chanukah cheer and Tefillin to soldiers stationed at the Suez Canal.

The campaign has also shaped Chabad from within. Chabad yeshiva students’ take their first baby steps toward futures devoted to reaching fellow Jews by way of Tefillin duty. Some develop regular Tefillin routes. On Friday afternoons, before Sabbath arrives at sunset, they stop by offices and storefronts to treat their regulars to a quick Tefillin wrap and Torah chat. Executives have been known to put deals on hold to accommodate the young upstarts’ requests.

Today at the Western Wall in Jerusalem Chabad students man a semi-permanent Tefillin stand. Leaving the shade provided by the booth’s corrugated tin roof, the young men approach thousands of camera-happy tourists, soldiers in uniform, bewildered bar mitzvah boys and grinning grooms with an offer to do a mitzvah at the Wall. Miles away from the Jewish homeland, Chabad has been an ambassador for Tefillin. Jews in Bangalore, Bangor, Bangkok, Big Ben, the Big Easy and everywhere in between have been reached by Chabad’s Tefillin Campaign.

In recent years, Chabad has taken steps to overcome the barrier that often stands between a one-shot Tefillin experience and a daily commitment to the mitzvah: Finances. Handwritten by scribes on kosher parchment, quality Tefillin sets are pricey. Even before the official Tefillin campaign began, Chabad sponsored Tefillin purchases for soldiers through its Machne Israel division. Starting in 2005, Chabad’s Kushner International Tefillin Bank, a project of the Shluchim Office, began heavily subsidizing pairs of Tefillin for any Jew committed to using them regularly. Over 5,526 pairs have been distributed to date. The bulk have made their way to Jews living in the United States and the former Soviet Union with others going to exotic locales like Cyprus, Guatemala, Turkey and Thailand.

Six years ago, after Rabbi Sholom Ber Gordon passed away, his son, Rabbi Joshua Gordon purchased many pairs of Tefillin with support from community members Gary and Rochelle Finder. There’s one for each of the Chabad representatives in the Valley family, and a pair available for every Jew who needs one. “When we help a Jew put on Tefillin, we are reaching an element of self that cannot be reached by speech or thoughts. We are tuning their antennas to receive spirituality through action.”