Not Your Parents’ Hebrew School 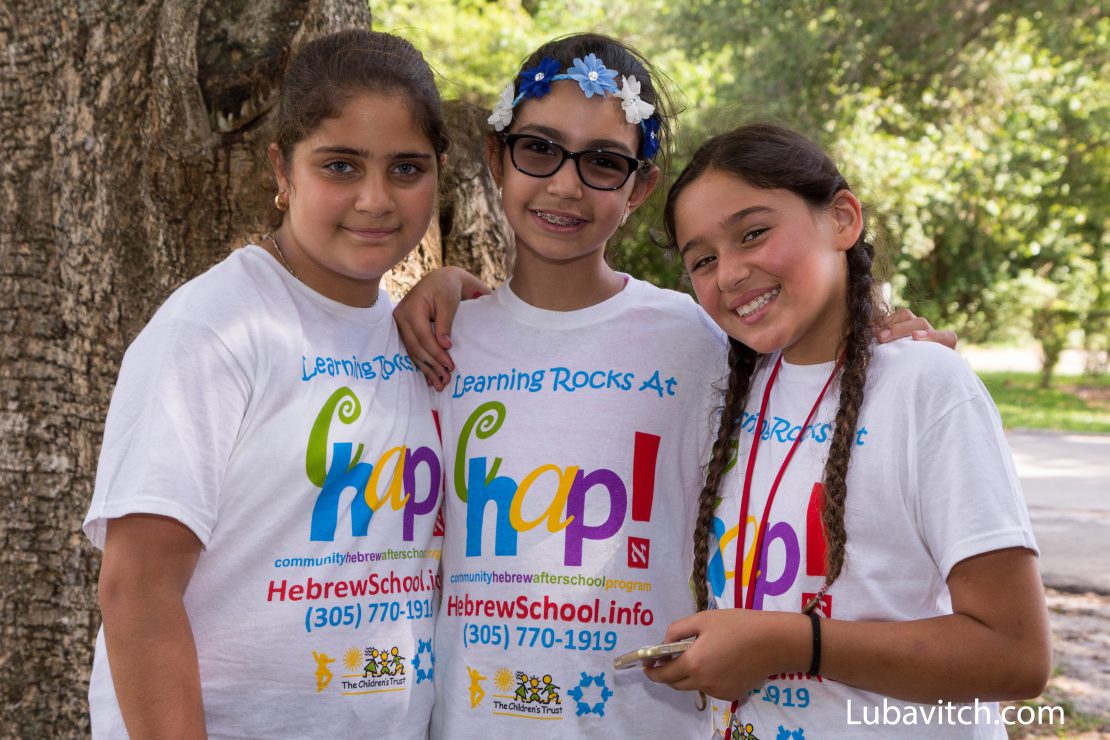 At the CHAP (Chabad Hebrew Afterschool Program) in Solon, Ohio

A new version of an old model is gaining popularity and scoring high marks with parents of today’s Jewish public school children.

Hila Strul watched in awe as her seven-year-old son, Yahav, came home one Friday from his Southern Florida public school, asked for a Book of Psalms, and proceeded to read an entire chapter of the ancient biblical text in the original Hebrew.

“It brought tears to my eyes,” recalls the Israeli expat. She was moved to discover that her American-born son could not only read in her native tongue, but seemed to appreciate that the text represented something significant to the Jewish people. Yahav has developed a love for Judaic learning and a strong sense of his Jewish identity despite being immersed in a completely secular academic environment at school.

These are the ideal outcomes that traditional synagogue-based Hebrew Schools have sought for decades. But results like Yahav’s are few and far between in the world of contemporary Jewish supplemental education. Which is particularly problematic given that 75 percent of North American Jewish children receive their Judaic instruction from these sorts of programs. Hebrew Schools across denominations are reporting declining enrollments; the traditional Hebrew School model, now perceived by families as no more than a pathway to a bar or bat mitzvah ceremony, does not serve their needs.

For generations of American Jews, Hebrew School has meant long, boring Sunday afternoons of tedious classroom lectures and Hebrew instruction. The term “Hebrew School” itself conjures up negative associations among many of today’s parents who do not want to subject their children to the same dull experience that they recall.

The sense of obligation or Jewish guilt that once prompted parents to enroll their children in Hebrew School is no longer a motivating factor. Fruma Resnick, a Chabad emissary to Tri-Valley, California, where she is director of the community Hebrew School, says that, “Many parents today are more removed and have less of a passion for Judaism.” Their top priority, she observed, is seeing their children happy and having a good time. “If the children don’t want to go, they won’t force them.” 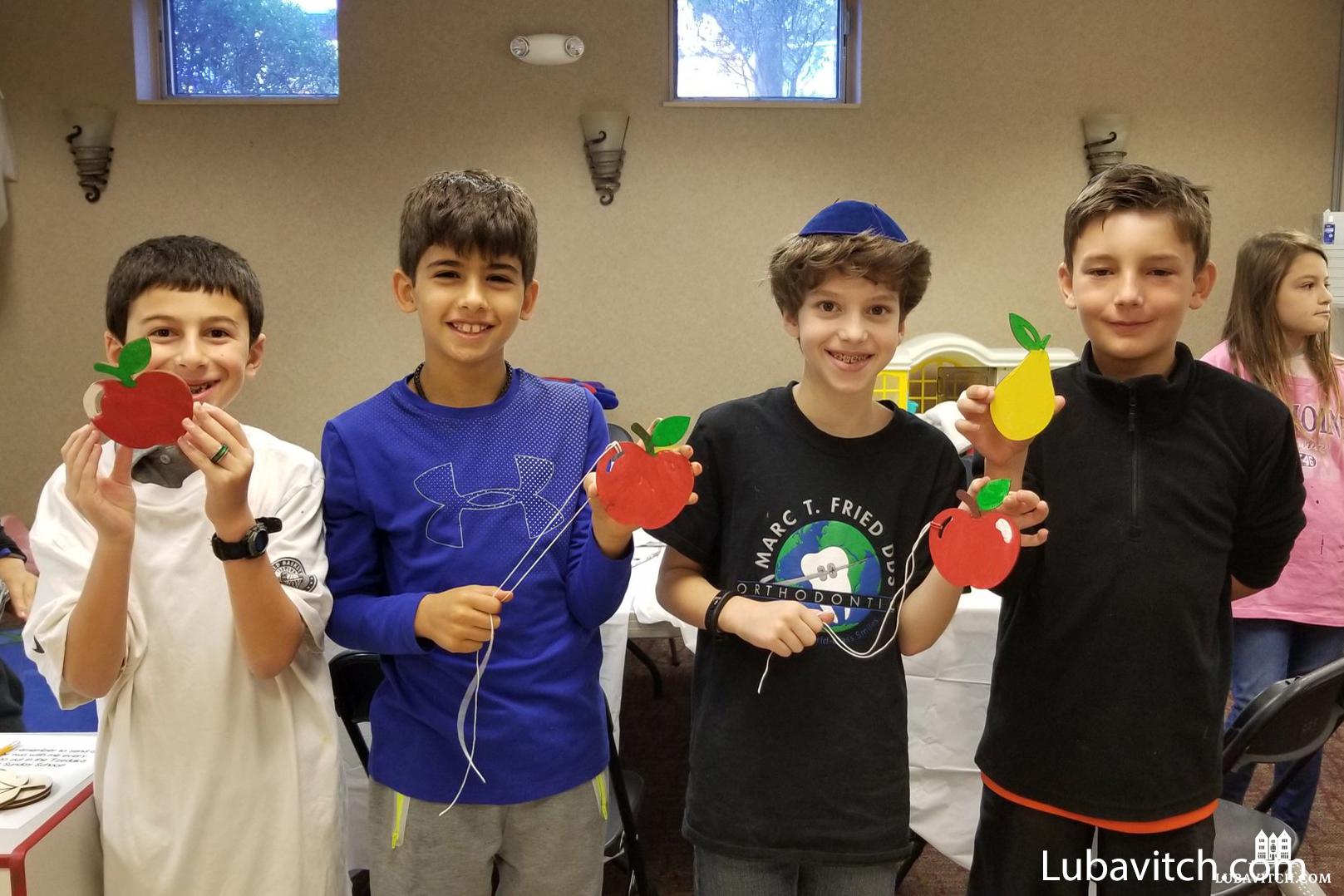 Parents also want their Sundays back. With two working parents in more than 80 percent of families, and children whose days are packed with sports, music lessons, swimming, and other extracurriculars, Sunday is family time. And among families for whom Jewish education is not a priority, Hebrew School is often the first item cut from the calendar.

What they do want is more and better after-school care. According to a study in 2014 by the after-school Alliance, after-school participation is up to fifteen million students, an astonishing 60 percent increase in the last decade alone. They further report that not only has attendance grown, but the programs themselves have grown in their offerings, and in their quality. After-school programs have become more than a means for keeping kids off the streets. They’ve become centers for academic enrichment and hands-on learning with caring and supportive mentors.

“If you are a working parent, you have to enroll your child in an after-school program,” says Rabbi Moishe Kievman, of Highland Lakes, Florida. As parents are already searching for premium after-school care for their children, they are only too happy to have it include a substantive Jewish education.

Ten years ago, the rabbi and his wife, Layah, noticed a need for a local Jewish aftercare program and founded a first-of-its-kind daily Chabad after-school in their community. “We saw that parents were unwilling to take their children out of a standard aftercare program just to have to drive them to another program that they then had to pay for.” The Kievmans solved the problem: they became the after-school program. 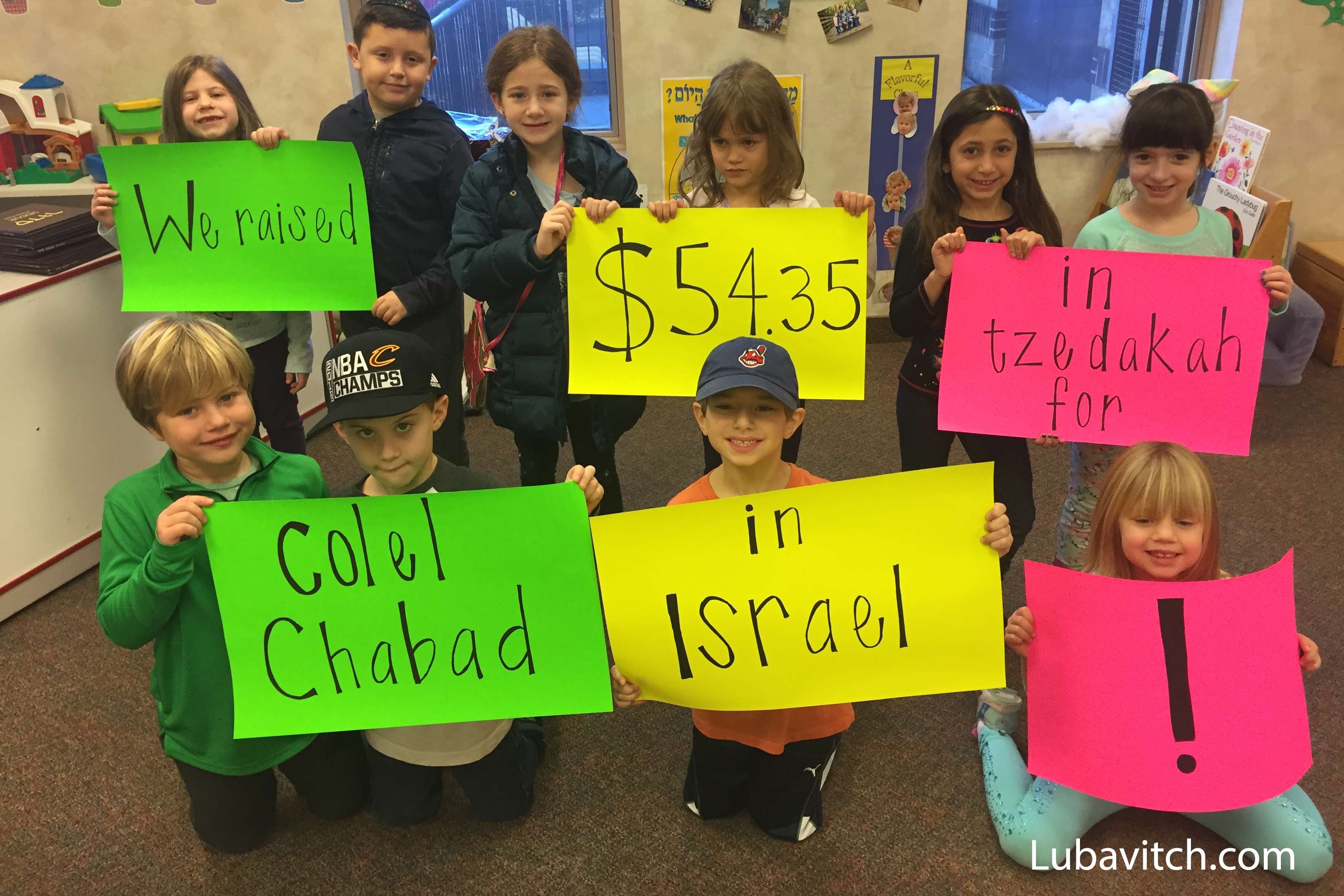 Interactive and educational: students are taught about giving charity

“We try to do everything in a fun manner, so it’s a lot more exciting than regular school,” Layah explains. “Most of these kids come five days a week and are used to this schedule so it doesn’t feel burdensome. With no homework, tests, or report cards, kids feel great about learning about Judaism.”

Rachel Pupkin says the fun atmosphere has helped her son, Eli, absorb a significant amount of Judaic knowledge. She and her husband, Alfredo, both attended Jewish schools in their youth and felt that it was important that their children receive some form of formal Jewish education. CHAP’s after-school model was the perfect fit for their family. “Eli loves it,” she says. “He wouldn’t mind missing a day at school but he would not miss Hebrew School!”

CHAP has a waiting list at both of the hosting public schools, with one kindergarten class maxing out at twenty-four children. “If the public school would provide us with more space, we could have over forty children enrolled in that class,” Layah says.

Perel Gross, a local mental health counselor who has interned at the program, noticed that the children don’t want to leave at the end of the day. “It is a Hebrew School, but there is so much more that is worked on,” he says. “Everyone in the school is focused on helping the children academically, socially, and emotionally, and the children learn so much more than just Hebrew studies.”

With their proven success, Jewish after-school programs are now popping up throughout the Chabad network. In Carroll County, Maryland, Chabad director Feige Cohen says that their newly developed after-school program is serving as an entry point for young families. “Our community has many nontraditional families who are not Jewishly engaged in any way,” he says. “These families are not ready to commit to an intensive Hebrew School, so a shorter after-school option is a lot more attractive.”

Cohen created a series of six-week after-school sessions, which she branded “The Jewish Discovery Program.” And she found that parents were open to sending their children: “This structure has been very well received, and we have seen how the positive Jewish experience has actually drawn the parents in as well and encouraged them to be involved in the community.”

Gitty Goldstein of Chabad of Cupertino, California, took the flexibility of after-school learning one step further. Her “Torah After-School” program is geared towards Jewish children who attend public school because they have special educational needs. “Parents are looking for solutions that cater to their children’s unique needs,” she says. “When it comes to special learning needs, parents don’t necessarily want their children to learn to read Hebrew, but rather to have a general Jewish identity. As an after-school, we are not a cookie-cutter Hebrew School; we cater the program to the children so they can grow at their level and enjoy it.” 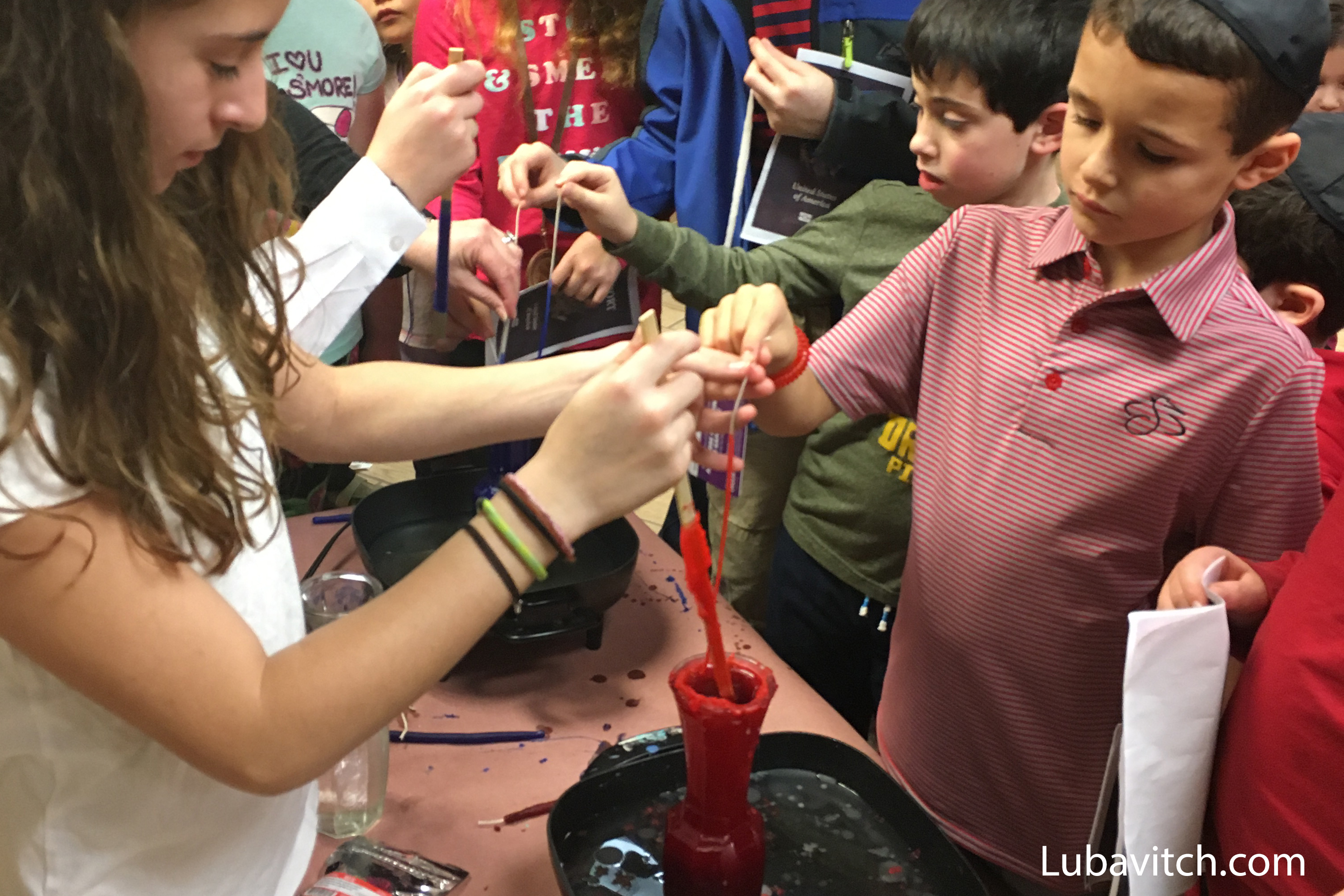 In Solon, Ohio, Chabad’s traditional Sunday Hebrew School is bucking trends with the growing enrollment of more than one hundred and thirty students this year. “The vast majority of American Jewish families want their children to have a bar or bat mitzvah, and Hebrew School is still the best route to that end,” says Hebrew School director Miriam Greenberg. She decided to open a separate Jewish after-school at the Solon Chabad center three years ago, in order to reach the families in her community who were not necessarily interested in a Hebrew School education. The after-school offers a Jewish Culture Club with stories and activities about Jewish holidays and the weekly Torah portion.

“Our goal at Chabad is to bring Judaism to as many Jews as possible, wherever they are,” says Greenberg. “By adding the aftercare to our roster of services, we are now engaging with children who would have had no other Jewish connection.”

And the efficacy of that connection is not to be underestimated. One girl who attended the Solon Chabad after-school joined the Greenberg’s family Passover Seder. Says Greenberg: “My husband was asking questions about the Passover story, expecting the Hebrew School student to answer, but this girl, who never took any formal classes, was happily answering every single question, just based on the weekly stories she heard at the program.”

Layah Kievman estimates that children learn about three times more content in the after-school model of Jewish education than the traditional once-a-week model. But she measures her ultimate success in the families that are inspired to make a commitment to full-time Jewish education.

Article from the latest issue of Lubavitch International.