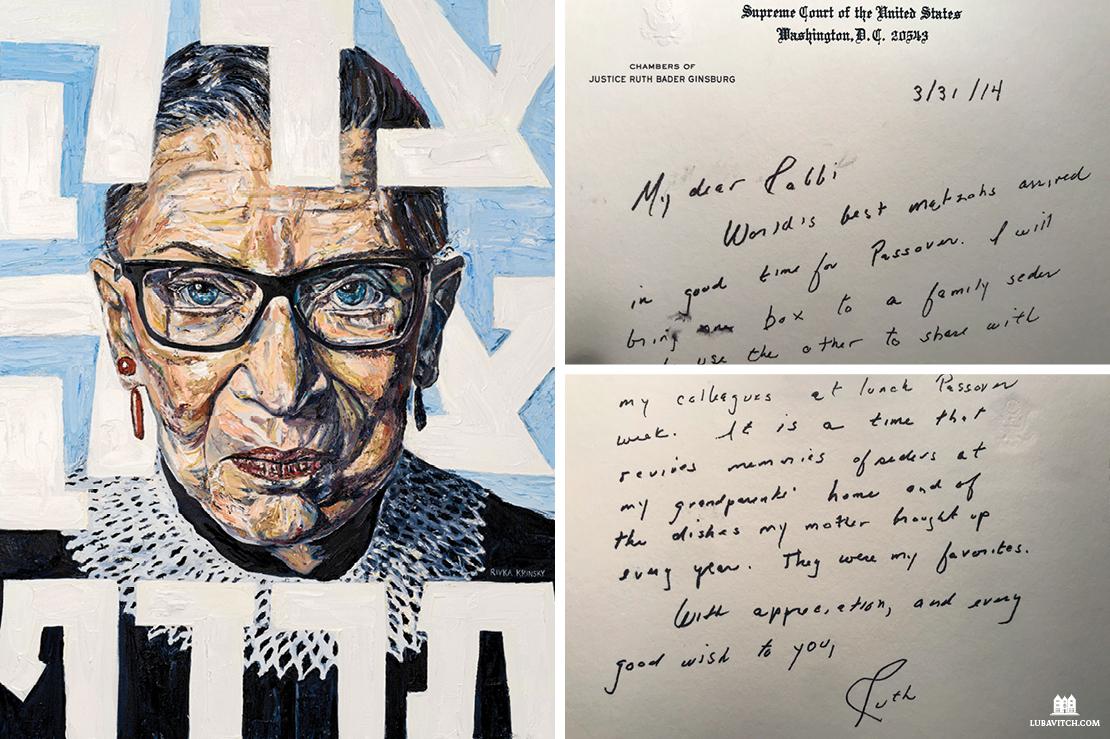 A Judge and a Jew

Ruth Bader Ginsburg, a Chabad rabbi, and the mysterious nature of Jewish identity

Back to Issue
By Sarah Ogince

My mother would smile to think of me lighting candles, and saying the brucha, something she made very special in our home…

Writing by hand, on stationery bearing the seal of the Supreme Court of the United States, Justice Ruth Bader Ginsburg recalled her childhood as a young Jewish girl in Flatbush, Brooklyn:

Chanuka was a happy holiday for us, not the least because of the gelt my grandfather gave to the grandchildren, for which we lined up from eldest to youngest.

The thanks were for a silver menorah and candles, delivered to the justice’s chambers by the note’s recipient, Rabbi Nosson Gurary, the Chabad representative to Buffalo, and regional director of Chabad Houses in Upstate New York. The menorah was one of dozens of Jewish mementos the rabbi sent Ginsburg during the two decades of their friendship—ornate dreidels on Chanukah, baskets of sweets and beautiful games for Purim, silver Kiddush cups, and, the justice’s favorite, handmade shmurah matzah for Passover. In return, he received thanks, effusive, lyrical, and at times, nostalgic.

Ginsburg, who passed away on September 18 at the age of 87, was memorialized as a brilliant jurist, a tireless advocate for women’s rights, and a liberal icon with rock-star status—the Notorious RBG. Her Jewish identity, however, proved harder to pin down.

After the Guardian’s obituary stated that she had “abandoned her religion” at the age of seventeen, there was an immediate backlash from American Jews. They pointed to the obvious manifestations of the justice’s Jewish pride: there was a mezuzah on the door of her Supreme Court chambers; she had personally lobbied for the court to close on the High Holidays; and there was the poster on her wall with the verse from Deuteronomy, “Tzedek, tzedek, tirdof.” Justice, justice, shall you pursue. (One of Ginsburg’s famous jabots, the lace collars she wore with her judicial robes, was embroidered with the words as well.)

The Guardian subsequently issued a correction: Though the justice had moved away from observance, “she nevertheless remained deeply committed to her Jewish identity.” The critics were satisfied, but the exchange glossed over a more subtle truth: Ginsburg’s relationship with her heritage, like that of most Jews, was dynamic and changing.

Jewish identity flows in many channels—religion, culture, ethnicity, collective memory—and yet it is defined by none of them. Spiritual and mysterious in its essence, its expressions may mature, evolve, and even contradict themselves, from moment to moment and over a lifetime.

Rabbi Gurary became a witness to Ginsburg’s Jewish life in 2003, when they were introduced by Justice Antonin Scalia.

Unlikely as they were, these friendships were an outgrowth of the rabbi’s work in Buffalo. As an adjunct professor since 1971, he taught classes that were part of the SUNY Buffalo catalogue: Jewish mysticism and ethics, Chasidic philosophy, and Jewish law on the undergraduate level, and later in the law school.

It was his work in the law school, and his personal interest in the intersections between Jewish and American law, that led the rabbi to think about the nation’s highest court. In 2001, through a contact at the law school, he met Scalia (“He was very fond of Jewish law”), and in 2005, Rabbi Gurary created the National Institute for Judaic Law, an academic organization that would consider current cases before the high court in the light of Jewish law (halachah).

The project was launched with a dinner at the Supreme Court attended by Scalia, Stephen Breyer, and Ginsburg. Rabbi Gurary remained in contact with the justices afterwards—they learned to expect a package from him before the Jewish holidays.

Ginsburg responded warmly to the rabbi’s overtures. “The beautifully crafted Kiddush cup revived memories of Hanukkahs past chez my grandparents,” she wrote in December 2004. Childhood had provided the most intense Jewish experiences of the justice’s life.

Like many of their contemporaries in 1930s Flatbush, the Bader family’s primary focus was integration into American society. Ruth’s mother, Celia Bader, had grown up speaking Yiddish in her home on Manhattan’s Lower East Side and dropped out of school at fifteen to help pay for her brother’s college tuition. She had something different in mind for her daughter. Intelligent and strong-willed, Celia steered Ruth toward a life of academic achievement in the name of independence.

But Judaism was important to Celia, too. The family belonged to a Conservative synagogue in Flatbush, and Ruth attended Hebrew school and Jewish summer camp for her entire childhood, first as a camper and then as a counselor. According to Ginsburg biographer Jane Sherron De Hart, Celia lit candles for Shabbat every Friday and brought up a separate set of dishes from the basement for Passover.

As a child and young adult, Ruth fulfilled her mother’s demands in both spheres, excelling in public school and earning the nickname “rabbi” at summer camp, where she delivered sermons and led Shabbat prayers. But that would change after her mother’s death in 1950, when seventeen-year-old Ruth drifted away from Jewish ritual observance.

Yet, in her own way, Ginsburg sought to synthesize the values her mother had instilled. As a lawyer, law professor, and judge, she championed the rights of women and minorities, a course that she acknowledged was inspired by her experience with antisemitism during the Second World War, and by the idea of tikkun olam that she had absorbed in her youth. In 1993, when she was nominated to the Supreme Court, Ginsburg paid tribute to her mother, whom she described as “the bravest and strongest person I have ever known.”

On the Supreme Court, Ginsburg took pains to define herself as a Jew in a way that she had never done before. “I am a judge born, raised, and proud of being a Jew,” she wrote in an essay for the American Jewish Committee in 1996. “The demand for justice runs through the entirety of Jewish tradition. I hope . . . I will have the courage to remain constant in the service of that demand.”

In addition to closing the court on the High Holidays, the new justice also lobbied to have a Christian reference removed from a certificate presented to members of the Supreme Court bar. When a colleague objected that the previous arrangements had been good enough for Brandeis, Cardozo, Frankfurter, and “even Goldberg,” the justice replied tartly, “They’re not good enough for Ginsburg.”

Rabbi Gurary recalls his first meeting with the justice in her chambers, when, he says, she proudly pointed out that she had a mezuzah on her door. “It was a prominent, silver mezuzah.”

As the years passed, it seemed to some that Ginsburg’s engagement with Judaism was deepening. In 2008, she gave a talk at the Sixth and I Historic Synagogue in Washington, during which, a Washington Post reporter noted, she seemed reluctant to talk about her move away from observance as a teenager. “Ginsburg said she might feel differently if she were young now,” wrote Robert Barnes, because women today have more opportunities to participate in observance.

After her husband’s death in 2010, Ginsburg began speaking to Jewish audiences more frequently, in the United States and in Israel. In 2015, she co-authored an essay about the role of women in the Passover story, intended to be used as an insert in the Haggadah.

And then there were her notes to Rabbi Gurary, which reveal a more intimate side of the justice’s Jewish self. “My dear Rabbi,” she wrote on March 31, 2014:

World’s best matzahs arrived in good time for Passover. I will bring one box to the family seder. . . . It is a time that revives memories of seders at my grandparents’ home and of the dishes my mother brought up every year. They were my favorites.

“She wrote to me openly, personally, in her own handwriting,” Rabbi Gurary says. “She wanted me to know how she identifies with the Jewish tradition, that she feels fond of it. The gifts brought back memories of home.”

The changes in Ginsburg’s Jewish life were subtle, almost imperceptible. Only she knew if, and how, her feelings about her heritage had evolved over the years. Yet her notes to Rabbi Gurary point to personal expressions of her identity in a channel that may have surprised her. As the rabbi says, “She didn’t have to write all that.”

Certainly the rabbi’s gifts provided an opportunity for Ginsburg to practice a core tenet of Jewish tradition—one that her mother had pursued with passion. On receiving a Purim gift in 2004, she wrote, it was “the ideal way to make the holiday understood and appreciated.” She was, she told the rabbi, passing it on to her grandchildren.