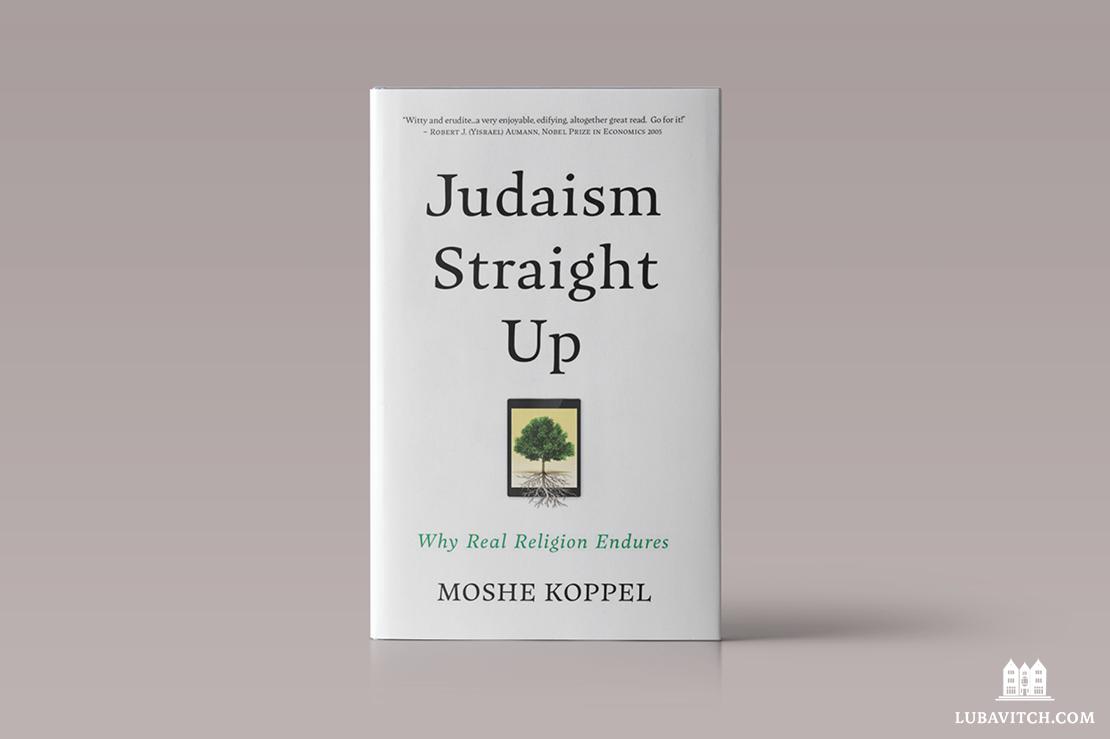 A Defense Of Torah Judaism

About thirty years ago, wandering through the stacks of Cornell’s Olin Library, I found a book of old sermons by a prominent early twentieth-century rabbi. He offered a valiant defense of traditional Jewish practice. He wrote that the prohibition against pork, science had now demonstrated, was meant to protect Jews from trichinosis and other such diseases — and that mikvah was G-d’s way to ensure that we were free of germs and bacteria. He may have been popular in his day, but since the advent of  FDA regulations and home plumbing, this rabbi’s arguments now seem ridiculously dated and irrelevant. It is not so much that what he says is wrong, as that it no longer addresses the concerns of the day.

As a Chabad representative at a major university, I observe that students’ big questions today are no longer about whether kosher food is really healthier than non-kosher food, or how to reconcile dinosaur fossils and evolutionary theories with the idea of a “young universe.” Rather, they center on whether the religion delivers on its ethical promise — to help us create kinder, more just societies —  when measured against a modern rubric. Social sciences and humanities like psychology, psycholinguistics, microeconomics, sociology, political science, and race and gender studies are the current touchpoints (or flashpoints) of our civic discourse. We see that certain ways of thinking can result in biased outcomes, and much effort is expended in trying to rectify these wrongs. Against this backdrop, many aspects of Judaism, which may not have seemed troublesome in the past, become problematic. To name a few: the prohibition against intermarriage, the obligation to help local family and community, and even the acceptance of a reality of financial inequity (i.e., some will be the givers of charity and others the receivers).

In his book Judaism Straight Up, Moshe Koppel offers a thoroughly modern and original approach to the defense of Torah Judaism, as well as insight into its future. He describes some “stock” figures of the American Jewish landscape in rich and compelling detail. These characters will certainly resonate quite differently with readers of various backgrounds and inclinations. And while entertaining the reader with these perhaps familiar caricatures of our recent history, Koppel uses them to highlight the trends we confront today and propose a way forward. In doing so, Koppel may not succeed in providing enduring answers to those central, perennial questions about Judaism and its place in the world — after all, the timeliness of his work limits its timelessness — but he provides a valuable tool for their discussion.

Koppel starts with Shimen, a Holocaust survivor who grew up Chasidic. After moving to America, he gave up his Chasidic garb, and he could often be quite sarcastic and angry. Angry at those who minimized the loss or thought it was time for him to move on, at those who had advised against leaving Europe when there was still time, and — in his heart of hearts — also somewhat angry at G-d for allowing it. Yet Shimen lives his life according to the dictates of halakha. He wears a kippah, he observes Shabbat and holidays, he keeps kosher, and he is fluent in the synagogue service. He studies Torah, he lives and works mostly among other Jews, and he takes part in the Jewish life-cycle events of the members of his community.

Contrast this with Heidi, whose grandparents came to America in the 20’s and 30’s. There was little Jewish infrastructure and few Jewish day schools (though, in any case, who could afford private school?). Their children attended a local after-school Talmud Torah. With time, as the family’s fortunes improved, they moved out to Long Island, joined a Conservative congregation, and went to services “often, if not regularly.”

When Heidi attended college, she took the opportunity to explore Jewishly. She attended egalitarian services as well as some lectures on halakha, and sprinkled her conversation liberally with Yiddish. But over time, she decided to expand her horizons and to become a concerned citizen of the world. Her parents’ abhorrence for the idea of intermarriage no longer seemed to make sense. In fact, it felt more than a little racist. She also found the mechitza in shul as well as the traditional marriage formulation (in which a man “acquired a wife”) off-putting.

Clearly, the moralities of archetypes like Shimen and Heidi are based on different principles.

To explain this, Koppel draws upon the work of anthropologist Richard Schweder, who, in examining morality cross-culturally, distilled three key values that dictate societal norms in traditional society: restraint, loyalty, and fairness. In traditional societies, he shows, these values are weighted against each other equally. By contrast, Koppel argues, our current society favors one value far above the others: fairness trumps the other two by a wide margin. Shimen cares about eating only kosher (restraint), and, all things being equal, feels his charitable obligations lie first within his own community (loyalty). To Heidi, on the other hand, restraint and loyalty seem tribalistic and, at times, even like excuses for perpetuating inequities. She thinks that the state should ensure that social needs like medical care and housing are met, so that no one is left out. For her, fairness is the value that is most important.

Another way in which Koppel contrasts the Heidi and Shimen archetypes is by considering the difference between living Judaism as a “first language” and as a “second language.” Namely, living Judaism as Shimen does, having grown up deeply immersed in Jewish community and practice (his “first language”), and living Judaism as Heidi does, by following the rules she learned in Hebrew School and through other formal Jewish settings while spending relatively little time surrounded by an overwhelmingly Jewish Weltanschauung (a “second language”). Native speakers instinctively know what is “correct,” and while it would be too much of a stretch to say that Shimen never has to ask a question about the technicalities of Jewish law (just as we check the spelling of unusual words and the grammar of long, convoluted sentences, even in our native tongue), on a day-to-day basis, his instincts serve him well.

Koppel demonstrates (in a fashion that may seem exaggerated to some) that while it is easy to get behind Heidi’s vision of a fair society, it is harder to see the hidden costs and the abuses of the system to which she aspires. For instance, Heidi’s caricatured daughter, Amber, in the name of inclusiveness, feels it is the job of the state to enforce fairness and to remove all religion from the common square. The reader gets the impression she is not far from voting to criminalize or shut down clergy who won’t perform gay marriage, doctors who refuse to perform abortion or take part in assisted suicide, and public speakers who suggest that human nature is not infinitely malleable. Welcome, cancel culture.

But as the title of Koppel’s book suggests, this is not the end of the story. Within a generation, creole languages emerge from pidgins, with a grammar that was lacking in the impoverished language of the older immigrants. Likewise, Koppel posits, while the Shimens of the world are mostly gone, a future with a viable, thriving Judaism may emerge from his heritage — most likely in Israel — because unless one makes a conscious effort to do so, it is rare for Jews to be fully immersed in Jewish society elsewhere.

Like the best of creative nonfiction today, Koppel succeeds in sharing his views in a thoroughly engaging and entertaining way. There is much to agree and disagree with in his book, but he provides fresh insight into why Yiddishkeit is often difficult to sustain in the Diaspora. And, reflecting on the changes in Israeli society over the past seventy years, he demonstrates why he believes that, ultimately, that country is unique in its capacity to support a viable Jewish future.

Koppel’s book is most useful when we view it not so much as a contemporary take on “What does the Torah say,” but rather on, “How can we best tell this story.” While it is true, for example, that practically speaking, much of Jewish living in a vibrant, engaged society is somewhat mimetic, it would be wrong to conclude that the details of the law do not matter, and that the correct decision somehow emerges spontaneously from the engaged community. Yes, there is a sociology of religion, and it has interesting things to say to our generation. Culture and environment matter. Living Judaism “like a first language” is important. But like the trichinosis arguments of yesteryear, there is a half-life to this approach. This is not so much a criticism of Koppel’s work, but an inherent feature of the genre. Still, used as a linchpin for opening important communal conversation about where we are going as Jews, this book will not disappoint.

Related Articles
View All
Books
Today in Jewish History: The Victory in Chabad Library Trial
On the 5th of Tevet (Hei Teves) in 1987, the extensive library of the sixth Rebbe, Rabbi Yosef Yitzchak Schneerson, was declared as belonging to…
Books
In Pursuit Of Meaning
We live in an age that is more concerned with self-help, self-development, self-empowerment, self-actualization, and self-care than any other age in history, but we are…
Books
Revisiting R. Schneur Zalman: The Alter Rebbe
As I read through three biographies of Rabbi Schneur Zalman of Liadi, the founder of the Chabad movement, known as the Alter Rebbe. I was…
Books
Children’s Book Turns Personal Tragedy Into Communal Healing
A new book about Moussia Zaltzman’s life and legacy models the process of discussing painful realities with children
Get Inspiration to your inbox!
Newsletter
Join our weekly newsletter for inspiration and updates
Donate
Find Your Local Chabad Center
Subscribe
|
Log In
Chabad
About Chabad-Lubavitch
About Chabad Lubavitch
The Rebbe
Headquarters
Magazine
Magazine
News
News & Updates
In The Media
Impact
Social and Humanitarian
Social and Humanitarian
Education
Education
Community
Community