A Couple of Volunteers 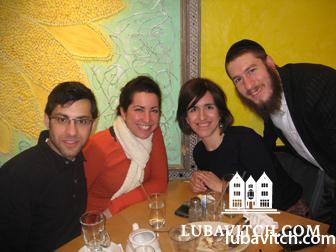 Michael Corwin and Julie Ames with Tzvi and Sheva Tauby, co-directors of Ivolunteer.

(lubavitch.com) He met Sheva and her husband over a traditional Shabbat dinner on Manhattan’s Upper East Side. By the time dessert was cleared, Sheva had a hunch that Michael Corwin, 29, was a perfect match for Julie Ames, a fellow volunteer. Though he had never dated someone through a matchmaker, and later admits that he only followed through “to be agreeable,” Corwin and Ames are now engaged. Sheva, he says, was on the mark.

Sheva Tauby is in the business of matchmaking, though her matches are not generally of the romantic nature.

As co-director of the Ivolunteer Holocaust visitation program based in New York City, Tauby spends her days matching volunteers with Holocaust survivors. The pairs meet on a weekly basis, usually in the survivor’s home, to socialize.

When not visiting survivors herself, Tauby sips coffee with volunteers, arranges holiday and Shabbat parties, and hosts personal study sessions. Part of the motivation to volunteer, recruits tell her, is to explore their own Judaism. Tauby acknowledges their interest through Torah classes, individually tailored, and Shabbat meals like the life-changing one Corwin enjoyed.

Recently she extended her penchant for matchmaking beyond the social scene. With many volunteers unexpectedly jobless, Tauby is now a headhunter of sorts, collecting resumes and connecting potential employees with employment.

The volunteers, she maintains, are the core of the program. “Taking care of them and making sure that they’re happy,” is a large part of her role at Ivolunteer. And setting them up, she believes, is a continuation of her work with the Holocaust survivor community.

“Hitler wanted to take away our Jewish continuity. By matching up Jewish couples, we are preventing his dream from being fulfilled.”

When Corwin completed the online volunteer application last November, he was thinking of his grandmother, a Holocaust survivor. Not wanting her, or any elderly survivor to be lonely, the Manhattan-based writer decided to become a regular volunteer. Since that Friday night so many months ago, Corwin has visited Dora every Monday afternoon in her central Village apartment. The two share an alma mater, NYU, and similar interests: Dora is a clinical psychologist, psychology was Corwin’s minor at college.

“Meeting someone who is so diametrically different in age is fascinating,” he says. “I have learned a lot about myself from hearing about Dora and her worldview.”

Tauby’s skill at matching the two is as clear as her knack for setting up Corwin and Ames.

After her 2007 move from Atlanta, Ames “got situated, found a place to live, and wanted to connect with the Jewish community.” Google brought her to Ivolunteer’s website, and she was hooked.

“I always knew that I would meet my husband while doing something I truly enjoy and care about,” explains Ames, 27. “Then he would be doing it as well and we would have something in common.”

When Tauby called to set her up late last year, the graphic designer was immediately game. Corwin contacted her via Facebook and they made a coffee date for 2:30 on a Sunday afternoon. “The next thing we knew,” she says, “it was six o’clock and he asked, ‘are you hungry?’”

“And the rest, as they say, is history,” laughs Corwin.

Corwin says that he never dreamed of meeting his “bashert” through this volunteering stint, though, he says, “I knew it would be in some sort of destined, interesting way.” The providence of the story is inescapable. Two nice Jewish singles sign up to do a mitzvah and their reward is the greatest one imaginable.

“We talk about it every day,” shares Ames. “I believe that people who volunteer have a special spark inside. And when two of us connect, it is very natural and very rewarding.”

A June 2010 wedding is planned on Brandy Pond, Maine.

Related Articles
View All
In Late Life, Isolated Holocaust Survivors Find New Friends
(lubavitch.com) It is nearly 70 years since the start of the systematic, state-sponsored murder of over six million European Jews. Today, with anti-Semitism on a…
Remembering Every Day
(lubavitch.com) “They survived and gave us a future. We are here because of them,” explains Rabbi Tzvi Tauby. “Their sacrifices affect our lives every day.”…
Get Inspiration to your inbox!
Newsletter
Join our weekly newsletter for inspiration and updates
Donate
Find Your Local Chabad Center
Chabad
About Chabad-Lubavitch
About Chabad Lubavitch
The Rebbe
Headquarters
Magazine
Magazine
News
News & Updates
In The Media
Impact
Social and Humanitarian
Social and Humanitarian
Education
Education
Community
Community