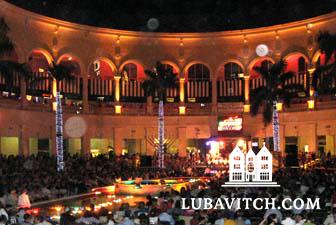 An overflow crowd of 10,000 men, women and children gathered in the eluxe outdoor theater at Gulfstream Park in Hallandale Beach, Florida on Tuesday evening to participate in the 28th Annual South Florida Chasidic Chanukah Festival.

Sponsored by Chabad of South Broward, the festival has long laid claim to being the world's largest Chanukah Festival.

The crowds streaming to the event were so large that, "We had to plead with the sheriff to use his authority to convince the local security and Hallandale Police, to keep the gates open," said Rabbi Raphael Tennenhaus, Chabad of of South Broward's executive vice president.

Kinderlach, a charming boy's choir from Jerusalem, had the audience swaying to the beat as they transfixed the audience with their upbeat lyrics, vibrant costumes and choreographed dancing.

The lighting of Florida's largest menorah was an awe inspiring sight, gleaming against the star studded sky, with the candles lit by the elected officials, Jewish community leaders and individuals who helped sponsor the evening.

A highlight of the program was the #1 superstar of Jewish Music, Avraham Fried, who uplifted, inspired and enthralled the thousands of guests with his singing.

With an upgrade in both venue and entertainment, the festival did more than merely entertain the attendees. It inspired.

Related Articles
View All
Holiday & Shabbos
Purim Notes From The Chasidic Rebbes
Mordechai “The Jew” Mordechai was a Benjaminite, but he is called “Yehudi,” literally meaning a descendant of the tribe of Yehudah. Likewise, the Megillah refers…
Holiday & Shabbos
From Fruits to Roots
Two generations came together to celebrate Tu B’Shevat, the New Year for trees, at the Friendship Circle of Free Hebrew for Juniors in Montreal, Canada,…
Holiday & Shabbos
Tu B’Shevat: Where’s the Fruit?
But in fact this plant-based holiday takes place in the middle of winter. Considering that the fruits of the trees haven’t yet begun to grow,…
Holiday & Shabbos
Ancient Scroll Sparks New Journey For Iranian Teen
It was about thirty years ago when an old Sephardic Jew named David Abtan walked into my office and said ‘Rabbi, I need a favor…
Get Inspiration to your inbox!
Newsletter
Join our weekly newsletter for inspiration and updates
Donate
Find Your Local Chabad Center
Subscribe
|
Log In
Chabad
About Chabad-Lubavitch
About Chabad Lubavitch
The Rebbe
Headquarters
Magazine
Magazine
News
News & Updates
In The Media
Impact
Social and Humanitarian
Social and Humanitarian
Education
Education
Community
Community