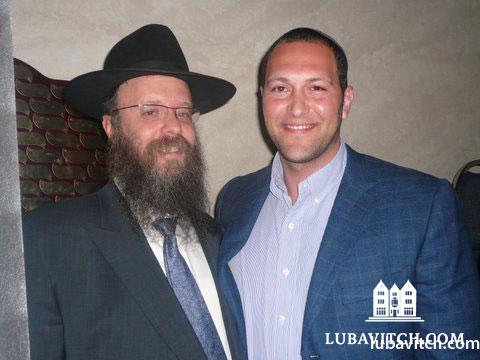 (lubavitch.com) Shattered by the murders in Mumbai, one energy magnate is picking up the pieces by making a significant contribution to a Florida Chabad center.

Rabbi Moshe Meir Lipszyc announced today that Guma L. Aguiar, co-founder of Leor Energy, an oil exploration and production company  based in East Texas, contributed an additional half million dollars to Chabad Lubavitch of Fort Lauderdale. The center will be renamed “The Guma Aguiar Family Campus.”

“Guma has a heart of gold,” said Rabbi Lipszyc. In recent years, he's funded much of Chabad of Ft. Lauderdale's dynamic growth. "He's now agreed to make his most recent contribution public because he wants to show the world that this is how Chabad responds to the oppressive darkness of terrorism, by taking action and growing.”

Aguiar, 31, told Lubavitch.com that, like the rest of the world, he was stunned by the news of the terror attacks in India. Groping for answers, Aguiar considered Chabad’s place in the world.

“Chabad, by definition, is right there, on the front lines, helping Jews.”

Just five years ago, Aguiar encountered Chabad’s kindness personally. Born Jewish and raised by parents who accepted a different faith, Aguiar knew little of his Jewish heritage until he and a few friends stepped into Chabad of Fort Lauderdale one Friday evening.

Rabbi Moshe Meir Lipszyc, executive director of Chabad of Fort Lauderdale, welcomed Aguiar and his buddies to share Sabbath dinner at the Lipszyc family home. Aguiar was surprised by the invitation.

“This was before my success. I had never been to an orthodox synagogue before, and yet Rabbi Moshe Meir went out of his way to be there for me, with warmth, never being pushy,” Aguiar said.

Aguiar and his family have since grown in their commitment to Judaism. Aguiar studies Torah regularly, and has keen interest in Chabad Chasidic texts that explore the mystical aspects of Judaism. Last month, he and wife Jamie Aguiar celebrated the circumcision of their newborn son at Chabad.

“I am proud to say that I consider a great deal of my financial success a by-product of my relationship with Chabad and an outgrowth of my religious journey,” said Aguiar. Shortly before the market went into a tailspin, EnCana Corp. purchased Leor Energy’s natural gas and land holdings in East Texas for $2.5 billion. “I feel G-d was looking out for me,” said Aguiar, who felt compelled to give back.

Chabad of Fort Lauderdale plans to utilize the funds to expand its popular programs for children and adults. In Fort Lauderdale, Chabad runs additional three satellite branches in Las Olas, Lauderdale by the Sea and Harbor Beach, as well as the Filstein-Martin Torah Academy, and Sasson-Ovadia Hebrew School. A Friendship Circle Program will be opening in Harbor Beach this year. This September, Chabad extended its Mommy and Me and Bagel Babies programs into a preschool, Ganeinu. The center also hosts a branch of the Rohr Family Jewish Learning Institute and operates a mikvah and café.

Aguiar, a pacesetter in the oil and energy world would like others to follow him in this philanthropic venture. “I encourage everyone to get involved in supporting their local Chabad center and the worldwide Lubavitch Headquarters. The Jewish people need to understand that taking care of Chabad should be a priority.”