In Conversation: Dr. David Luchins on The Rebbe 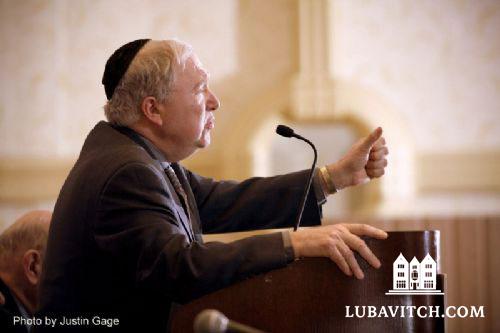 Dr. David Luchins is chair of the political science department at Touro College in Manhattan. Luchins, aide to both former Vice-President Hubert Humphrey and New York Senator Daniel Patrick Moynihan, is a vociferous presence in political and Jewish spheres. He is a national officer for the Jewish Council of Public Affairs (JCPA) and a national vice-president of the Orthodox Union.

A popular speaker at Jewish functions worldwide, Luchins has been selected to present the keynote address at the banquet concluding the 25th annual International Conference of Shluchim. Lubavitch.com spoke with him this week, to discuss his achievements and his connection with the Previous Lubavitcher Rebbe, Rabbi Yosef Yitzchak Schneerson, and the Lubavitcher Rebbe.

As a former student of yours at Touro’s Lander College for Women, I remember the large photo of the Rebbe prominently displayed in your office. What is your connection with Chabad?

In many of the 20 books he published, my father cites a “wise friend,” who is the Frierdiker Rebbe, with whom he often consulted about his work.

He had a big impact on education in America.

In the early 1940s, New York State tried to pass a law that would force all schools to teach secular subjects in the morning. [Yeshivahs traditionally teach Judaic subjects in the morning, followed by general studies in the afternoon]. My father approached the Frierdiker Rebbe for advice on the matter. He encouraged him to fight against it, so my father, a noted psychologist, testified before the New York State Assembly, and the law never passed.

And within the religious community?

My Rabbi, Rabbi Yosef Dov Soloveichik, said that the Previous Rebbe was the only one [of the many Rabbis who immigrated), who figured out what to do in America. He didn’t speak English, but within a short amount of time, he knew exactly how to approach the American yeshivah system.

Because of his foresight, he completely redefined Jewish education in this country. What he taught then, people are following now.

Rabbi Soloveichik said that had they listened to him then, we would not have lost an entire generation.

What was your family’s relationship with the Rebbe, Rabbi Menachem M. Schneerson?

The Previous Rebbe once referred my father to the Rebbe saying, “speak with my son-in-law, you will all be listening to him one day.”

The night my wife and I got engaged, my father went to 770 to share the news with the Rebbe. When he arrived, the Rebbe spoke to my father and quoted some lines from Plato.

The Rebbe then asked my father why scientists, who are so meticulous about their scientific methods, become instant skeptics when it comes to religion. They discussed the subject until two in the morning, but my father didn’t get a chance to tell him of my engagement.

When he returned home to Albany, the Rebbe’s secretary called and told my father that the Rebbe would like to speak with him. “Why do I have to hear from Rabbi Osdoba in Norway that your son is engaged to his cousin?”

“I thought that the Rebbe knows everything,” replied my father. “Only if you tell me everything,” he responded.

Your connection with the Rebbe was a lengthy one.

Before I got involved with Touro College in 1970, I went to the Rebbe for a blessing. He also sent many girls to the school.

The last time I saw the Rebbe was in 1990, during the famous “dollars line,” where the line stretched on for hours. He said to me, “I haven’t seen your father in years.”

“My father doesn’t want to impose on your time,” I answered.

“I need to see my friends also,” responded the Rebbe.