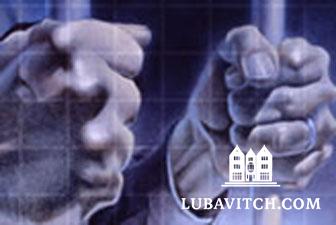 Empty hours follow empty hours for inmates serving out their sentences. Now, a new program seeks to fill some of those hours with Jewish education and spiritual growth.

Swaying as he pores over a translation of the Talmud, parrying questions with more questions posed to his rabbi, Jonathan, paunchy and silver-haired at 52, could pass for the average Jew in a late-blooming search for his intellectual heritage. But then notice Jonathan’s outfit – a mint green pullover tucked into green elastic waist pants – matches the 20 men around him. In this study hall where the sunlight fades before gray fluorescent lighting, and the smell is industrial strength lemon-scented floor cleaner, it’s the guard looking in at the door that gives it away.

Hours after Jonathan puts away his Jewish books he will line up has he does every afternoon, to be counted, part of the daily routine for inmates at a minimum security Federal Prison Camp. Jonathan (not his real name), spoke with Lubavitch.com about being Jewish in prison and the Adel bas Avraham “Learning-to-Live,” three-day Yeshiva in-Prison program offered by the Aleph Institute. Jonathan’s story, punctuated with sighs and pauses, is about the monotony, isolation, and the creeping, infectious hopelessness of “watching those near to you drift away” in prison, and how this drummed up his interest in Judaism during his incarceration. It helped that many of the 20 Jews housed in the prison camp at Maxwell Air Force Base in Montgomery, AL, were observant and had friends donating the latest Jewish publications to the prison library.  “Before I went to prison camp, I don’t believe I ever saw the Talmud,” he said. Even after becoming more active in Jewish life in prison, going to prayer services and joining holiday gatherings, Jonathan confesses he jumped at the chance to join the yeshiva group because it offered relief from the Groundhog Day nature of prison life. “Everything happens the same every day in prison. Time drags.” Recalling the first day of his “Learning-to-Live” experience, Jonathan’s voice picks up pace and punch. “It was absolutely fantastic. The students were not interested in whether I was Reform or Conservative. All they were interested in was dialogue and hearing my thoughts on a particular concept and sharing what theirs was. Suddenly time was flying.”

Last week, 16 Jewish men doing time in Morgantown Federal Prison Camp in West Virginia experienced the seventh yeshiva-in-prison program. Aleph is working channels of approval to bring the total to ten for this year, with the goal of expanding to 30 facilities. Transforming dead-time into a meaningful and productive learning opportunity regardless of an otherwise negative experience is the purpose of the Yeshiva-in-Prison Learning-to-Live program,” said Rabbi Sholom D. Lipskar, Founder and Chairman of The Aleph Institute. Classes start after morning line-up at 8:00 and end at 3:30. The dozen rabbis running the yeshiva were selected based on their experiences leading prison holiday services and visiting inmates. Inmates rotated round robin for one-on-one sessions with the rabbis, much like classic yeshiva chavruta – learning pairs. “It was almost conversational learning – questions, answers, counter questions – which requires participation,” said Jonathan. “You cannot fall asleep in a one-on-one setting. You are thrust into the thick of it.

Topics span “Biblical Narratives on Ethics and Morals,”  “Faith and Reason,” “Jewish Living” and “Prayer.” Based on requests from past yeshiva participants, a section on Psalms was added for the West Virginia experience. “Focusing on the importance of Torah study and living as a Jew regardless of one’s environment is the catalyst for the development of this program,” said Rabbi Lipskar.

Educational opportunities for inmates abound on paper. But getting a GED, learning to read or mastering the art of welding, landscaping, and basic plumbing are not interesting to the average, often college-educated Jewish inmate. Moreover, public support for prisons as places of rehabilitation versus punishment has diminished and funding has been cut. Pell grants, a financial resource that allowed inmates at one point to pay for prison-time college classes, have dried up. Yeshiva-in-Prison offers an intellectual outlet to inmates without asking the state or federal government to foot the bill. Jonathan speaks guardedly, but the emotional ramifications of Yeshiva in Prison came to the fore on the first day of the Morgantown session. The rabbis arrived on the day one inmate had been hoping for a furlough to attend his brother’s wedding. Denied his request, the Yeshiva study program offered some solace to this inmate at a time of emotional desperation. The coincidence underscores the Yeshiva program’s purpose, says coordinator Rabbi Mendel Druk. “The idea is to tell the men that the world didn’t forget about you, we still care.”