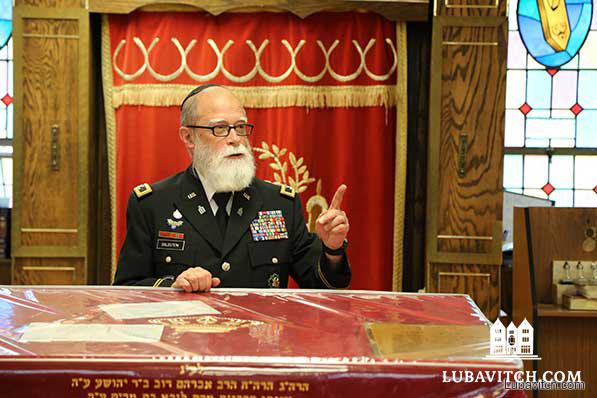 Levi Schlager was raised on his grandfather’s stories of the Battle of the Bulge and his daring escape attempts as a POW in WWII. For years, the young Schlager dreamed of joining the military. As he aged, his ambitions shifted and he graduated Florida State University with a degree in psychology.

Now, as a student at the Rabbinical College of Morristown, he is combining both passions. Plus a side order of Talmud to boot.

It is a dramatic new offering, in which the yeshiva, which already offers an accredited four-year bachelor’s program, now enables its students to complete a Master’s degree as well. Their studies “lead to a natural progression towards chaplaincy, whether in the military or at hospitals,” explains director Rabbi Yaakov Wagner. Schlager has been accepted as a chaplaincy candidate in the United States Military and two of his fellow students have just completed intense training under the auspices of the Association for Clinical Pastoral Education (ACPE).

“We know how pleased the Rebbe was when our dean, Rabbi Moshe Herson connected students with local businesspeople. He encouraged them to find appropriate vocations,” shares Wagner from his office in New Jersey. “Today we are continuing that by helping students find careers, whether that means utilizing the degrees they have or helping them return to school. This breakthrough program now allows our students to continue their rabbinic studies and concurrently train as accredited chaplains.”

For three months last spring, Benyamin Rechavel joined a dozen other students at an intensive interfaith, graduate-level training program. The course emphasized bringing spirituality and spiritual care to patients in a universal way. It also taught the students to take care of patients’ (and their families’) human needs first. “Sometimes someone needs a chair and a box of tissues,” Rechavel shared. “And sometimes we have to admit that it’s not necessarily going to be all ok.”

Rechavel and his colleague Gavriel Wood-Isenberg first shadowed resident chaplain Pearl Lebovic, a trained pastoral care provider since 2001. The two 20-somethings trailed her in and out of patients’ rooms for a year, modeling her caring ways. “I would knock on their doors and say ‘the chaplain is here with my young friends from the Rabbinical College.’ Patients were so pleased to see us.” So was the hospital supervisor. When he saw the young men’s enthusiasm, he asked if they wanted to undergo the training and go pro. They did.

Lebovic says she taught her protegees several crucial lessons. “Don’t give the patients false hopes, but steer them to trust in G-d. Emphasize the power of positive thinking. And, importantly, never judge.”

“The chaplain is the only one who enters a patient’s room without an agenda,” explains Cecille Asekoff, director of the Joint Chaplaincy Agency, a division of the Jewish Federation of Metrowest. “Their job is to be there for the patient, to listen, to know what to say and what not to say in a professional way. Chaplaincy is as old as Abraham and as new as CPE.”

Asekoff, who has supervised chaplains for 38 years, believes that the profession is changing. “It used to be that when people got sick they either got better or died. That’s not the case anymore. Patients are living longer and under different circumstances.” She has expanded the chaplaincy program to more hospitals, senior residences, and, newly, infusion centers. Having the rabbinic students professionally trained, she says, has been a dream long in the making. Chaplaincy, says Asekoff, “opens up a world beyond the rabbinate, for women and others who want to be involved in pastoral care.”

Rechavel is eager to continue the certification’s 1,600-hour requirement. The last three months taught him to “be sensitive, in a unique way,” he shares. “It could be that a patient is packing up, and my initial reaction is to say, ‘wow, that’s fantastic that you’re going home.’ But, for them, that might be something they’re dreading or even a nightmare. Training taught me to say, ‘I see that you’re packing up to go home, do you have any concerns you would like to talk about?’”

Schlager’s chaplaincy will take him a different route. He will enter the military as a commissioned second lieutenant and spend three months training in South Carolina. There, under the supervision of a military chaplain, Schlager will help administer care to 500 soldiers in his unit. “I anticipate that a lot of the skills I learned in yeshiva, such as discipline, timeliness, and focus, will come in good use in the military.

“The job will require that I continue my Talmudic learning. Hopefully I will have the skills from yeshiva to answer the questions that come my way.”