Women’s Mikveh To Open in Nigeria 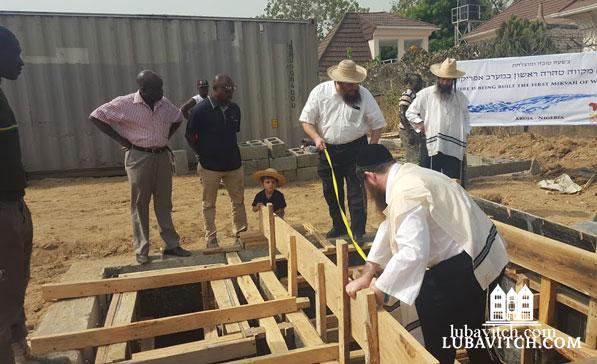 West Africa will open the doors to its very first state-of-the-art mikveh in late spring 2016. Launched at the initiative of Rabbi Israel and Haya Uzan, Chabad representatives to Abuja, capital of Nigeria, construction began in late January. The ritual bath will also serve residents and visitors in the country’s most populated city, Lagos, 339 miles from Abuja.

Abuja and Lagos are home to some 80 Jewish families, mostly Israeli expatriates who do business with the numerous corporations and blue chip companies headquartered there. Since arriving in Abuja in 2012 at the behest of Rabbi Shlomo Bentolila, the head Chabad emissary of central Africa, Haya and her husband put building a mikveh at the top of their priorities. “We were unsure of how many local or visiting women would actually use the facility,” she says, “but at the very least, I knew I needed one for my own personal use.”

Living in Abuja, the nearest access to an acceptable mikveh was the Atlantic Ocean, an hour flight away at the port city of Lagos. (An ocean may be used for ritual immersion when a traditional indoor mikveh is not available.) To date, the only existing mikveh in central Africa is located in the Congo, an exhausting 10 hours from Nigeria by plane, so Uzan often flies to France–a five hour plane trip, where she can take advantage of the European country’s 115 mikvehs.

A Mitzvah with Meaning

A mikveh is a pool of water connected to a natural source of water or to a pool of rainwater, designed specifically for ritual immersion. Prevalent in Jewish communities around the world, mikvehs, used by married women, are part of the infrastructure of every Jewish community. Immersion in the mikveh is a keystone of the Jewish marriage and the rhythm of separation and reunion within the relationship. Practicing the mitzvah is a way of “drawing G-d into your marriage,” according to mikvah.org, an international organization promoting mikveh use. 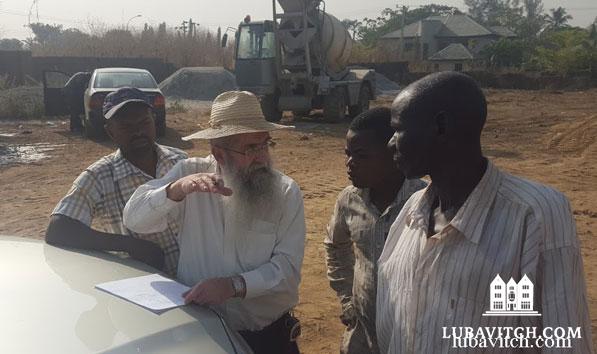 While mikveh acceptance has waxed and waned in the secular Jewish world over the last century, it has experienced a resurgence in popularity, jump started in the 1970s by the Lubavitcher Rebbe. Chabad emissaries raise awareness of this timeless tradition, and as the number of Chabad centers and Jewish communities have grown, the number of mikvehs has multiplied. Today, women observing the rituals of Jewish family laws can choose to dip in any of 1700 mikvehs around the world.

For two years, the Uzans tried to get a mikveh built but the prohibitive costs of land, and complications with building permits delayed the project. And then the question of who, besides herself, would actually benefit from the construction, remained. But in 2014, Haya Uzan joined many Chabad women around the world who launched mikveh projects inspired by the memory of Rashi Minkowicz, a young Chabad representative to Alpharetta, Georgia who championed the mitzvah in her community, before her untimely passing that year.

Much to Uzan’s surprise, the local women were receptive. Mikveh resonated with them as an integral component to a wholesome marriage and a way to help promote domestic harmony. Several of the Israeli wives had gone to mikveh before their weddings, and many of them expressed interest in making a commitment to the mitzvah should a local mikveh be available.

With momentum growing, Uzan resolved to “build a mikveh right now.” In short order, her husband located a small property and started a fundraising campaign. Within weeks, the couple signed a long-term lease and digging began mid-January.

Holy Waters in the Hot Desert

The engineering and construction of a mikveh are complicated and intricate, involving meticulous supervision to satisfy rigorous halachic requirements. Renowned mikveh expert Rabbi Gershon Grossbaum was brought on board to guide the architectural plans and oversee the construction of the foundation and the water reservoirs. Working in the sub-saharan region, Grossbaum devised unique solutions to the challenges posed by its extreme climate.

Every winter, Abuja experiences the harmattan, a dry and dusty northeasterly trade wind which blows from the Sahara Desert over the West African subcontinent. On its passage over the Sahara, it picks up fine dust and sand particles, creating big clouds of dust which blow over the region. The dust storms prevent rainfall formation, and when rain finally does fall, large deposits of sand turn the water a dark brown

“Rabbi Grossbaum designed a special, natural filtration system, in which natural stone is used to sift the dust from the murky rainwater,” explains Uzan. “It’s an ingenious way to render the water clean enough to qualify for use by halachic standards without employing technology, which invalidates the kosher status of the water reservoir.”

Construction is moving full steam ahead, and once the rain, expected with the onset of the wet season in May, fills the reservoir, Nigeria’s Jewish women will have a mikveh of their own.

Related Articles
View All
Chabad of Central Africa Opens First Day Camp
This year, school break in Nigeria coincided with Passover. For Chabad Rabbi Shlomo Bentolila, Chief Rabbi of Central Africa, it provided an opportunity too obvious…
New Centers
Jewish Community and Culture Comes to Life in Martha’s Vineyard
Ahead of the summer of 2022, the Alperowitzes booked a one-way ticket to the island on the ferry and launched Chabad of Martha’s Vineyard out…
New Centers
Trailblazing Former CTeener to Open Innovative Atlanta CTeen Center
Once a CTeener himself, Dovid Goldschmidt and his wife Talya are opening an innovative CTeen center in Atlanta, GA.
New Centers
Georgia Native Returns as Chabad Rabbi
Rabbi Chaim grew up just north of Atlanta in a home that was traditional, but didn’t practice all the particulars of a religious Jewish lifestyle
New Centers
Second-Oldest Building in Finland is Chabad’s Newest Center
After two decades of communal growth and half a decade of renovations, and with the help of an old friend from Bogata, Columbia, Chabad of…
Get Inspiration to your inbox!
Newsletter
Join our weekly newsletter for inspiration and updates
Donate
Find Your Local Chabad Center
Subscribe
|
Log In
Chabad
About Chabad-Lubavitch
About Chabad Lubavitch
The Rebbe
Headquarters
Magazine
Magazine
News
News & Updates
In The Media
Impact
Social and Humanitarian
Social and Humanitarian
Education
Education
Community
Community