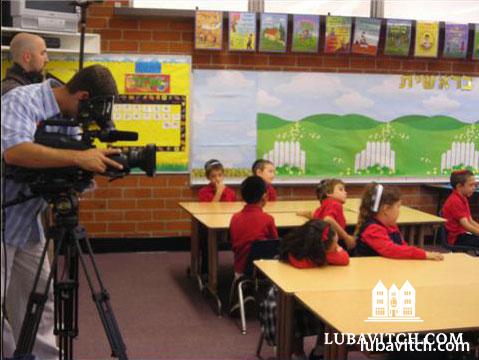 (lubavitch.com) Fully 13% of the 230,000 students in American Hebrew schools are enrolled in Chabad-run programs, a recent study found.

The study,  A Census of Jewish Supplementary Schools, by the Avi Chai Foundation,  included data showing “Chabad schools are the most rapidly growing type of school in the field.”

Hand in hand with growth is a burst of innovation this fall from all levels of Chabad’s youth education movement, from Hebrew school to day school to teen clubs and publishing.
Flying High in Texas

On a bright, big sky day, 80 students of Plano’s Chabad Hebrew School and their parents stood back as a flock of doves was released to celebrate opening day. Part of this year’s theme is ‘Give Wings to Your Knowledge’ and Rivkie Block, the Hebrew school’s director, saw the dove release as the way to bring the message to life.

“We want students and their parents to take what they learn in the classroom and grow with it, bring the lessons to their own lives, to the discussion at the dinner table,” said Mrs. Block, also Chabad of Plano’s co-director.

The Avi Chai study underlined why giving Jewish educational experience enough oomph to resonate beyond the books and classroom years has teachers brainstorming double-time: one third of students attending supplementary schools – Hebrew schools, Sunday schools, and the like – drop out after seventh grade. There is little time to waste.

A College Model for Hebrew School

It’s this sense of urgency that drove Rabbi Pesach and Chany Scheiner, directors of Chabad of Boulder, to ditch the name Hebrew School for their supplementary Jewish education program altogether. They’re calling it “Jewish U for Kids”, and it’s more than a name change.

At the end of October, Jewish U will open with college classes as its model. Instead of one long year of study, they are offering a series of six-week seminar style courses where children can choose to study Talmud, advanced Hebrew, Jewish living and other topics.

Focusing on one subject intensively has benefits. “The children will come out knowing more than they would if they had a bit of this and a bit of that,” said Mrs. Scheiner.

Also, allowing students to group themselves by interest instead of age group will give students “ownership and passion for the classes. This is a way to empower, not take over, their Jewish journey,” she said.

Robyn Hill believes Mrs. Scheiner pedagogic powers are strong enough to revamp the Hebrew School model. Her children Shira, 11, and Nathan, 8, studied with Mrs. Scheiner. “She had them using all their senses to study. They had fun while gaining critical thinking skills. My kids were never just studying and sitting still.”

Day School Goes to the Dogs, the Gifted

The second grade, taught by Mrs. Ronya Fajnland and language teacher Mrs. Sarah Rabin, finished a unit on Hebrew words for body parts – human and animal. Toby, a Wheaton terrier, came to school so the second graders could test out their Hebrew. Animal Planet’s crew flew out from Boston to film the exercise for an episode of Dogs 101.

“Learning out of a textbook is boring. It is passé. Experiential learning is what children are going to remember,” said Carol Koenigsberg, director of marketing for Hebrew Academy.

Even when the cameras aren’t rolling, Hebrew Academy is taking steps to enhance their educational program. In a new program headed by teacher Rochelle Fainbarg, gifted students will be identified and given projects that push their potential to the forefront.

“We are not looking to give them extra work, but appropriate, challenging work,” said Mrs. Koenigsberg.

Teen Spirit in a Cell Phone

Finding an appropriate metaphor for the spiritual topics covered by the Bat Mitzvah Club kept Esty Frimerman, director of the worldwide club, guessing. How to get across to preteens the soul’s immutability, despite the physical body’s growth, maturity and demise? Then her cell phone rang and an idea was born. A soul is like a sim card, the plastic gizmo that retains phone data no matter what the outer housing – flip, flat or funky.

Modern metaphors for ancient wisdom crop up throughout the Bat Mitzvah Club’s new curriculum.  “I wanted a more novel and creative way for the messages to hit home, and to leave an impact when club members move on to high school and college,” Mrs. Frimerman told Lubavitch.com.

“Real Role Models for Real curriculum,” said Mrs. Frimerman, “explores Jewish life through the eyes of a young teen” using the lives of the matriarchs as a touchstone for touchy topics from peer pressure to prayer.

When word of a new prayer book that would allow children unable to read Hebrew to participate in communal prayer hit the web in the last week of August, the response was overwhelming.

Three thousand copies out of a first printing run of 5000 were requested within two weeks. The first order was from a Hebrew school in Singapore. Soon the publisher, Tools for Torah, was inundated with requests from Alaska, New York, Texas, Florida, California, the UK, Hong Kong, and between and beyond.

Traditional Jewish prayers recited in Hebrew are a staple of Jewish education at all levels from supplementary school to day school to yeshiva. Students with limited Hebrew reading proficiency are too often left mumbling in the back of the classroom.

Putting together a prayer book for non-Hebrew speaking children was a challenge. First, Chabad’s educational division gave Rabbi Chayim Baruch Alevsky, head of Tools for Torah, permission to use the prayer book text for this special edition. Writing an easy to read transliteration took three complete revisions until children – students from Chabad of the Westside in New York City where Rabbi Alevsky is the youth director – could read the text with ease.

The finished product is attractive and more than a pronunciation guide. Key words that sum up the meaning of the prayer are highlighted and translated into English. They can be used as Hebrew vocabulary builders, too. Five to six-word, kid-friendly meditations appear before each prayer.

They are there so prayer is not rote but a “trigger for conversation,” Rabbi Alevsky said.