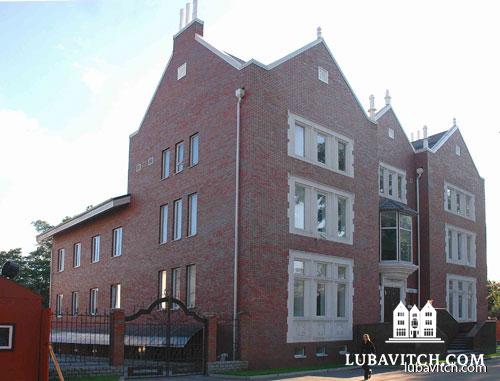 (lubavitch.com) A new Jewish Community Center and Synagogue in Dniprodzherzinsk, designed with a familiar facade, will be dedicated amid much fanfare on Wednesday, promising to breathe new life into this industrial port city.

Almost 80 years after the closing of the town's original synagogue by the Soviet government, the new building–whose corner stones were extracted from the wall of the old synagogue once located on the site of the new center— will become a hub of activity for the city’s Jewish population of 4,000.

Looking much like "770"–the Chabad-Lubavitch headquarters building on Eastern Parkway in Brooklyn, the new JCC includes the Beit Reuven Synagogue and the Beit Baruch Jewish Community Center. They are named respectively, for the father of Rabbi Shmuel Kaminetsky, Chief Rabbi of Dnepropetrovsk, the regional capital, and for the father of Gennady Bogolubov, Chairman of the Jewish community of Dnepropetrovsk, the major sponsor of this project.

The JCC will house a kosher restaurant, a soup kitchen, classrooms for study, a recreational center for youth activities, and a museum.

Rabbi Levi Stambler, Dniprodzerzhinsk’s spiritual leader who came from Israel with his wife Dina in 2001, says that the replica is meant to recall and inspire the same kind of spirited outreach exemplified by the Lubavitcher Rebbe, Rabbi Menachem Mendel Schneerson, of righteous memory, who made his base at 770.

Similarly, he says, “We wanted this new center to be a beacon of light to help all those here."

The dedication is expected to draw some 1,000 guests, including locals and Jewish leaders from abroad, among them Israel's Chief Sephardic Rabbi, Rabbi Shlomo Amar, former chairman of Yad Vashem, Professor Shevach Weiss, and noted Jewish Philanthropist Allen Green. Mr. Bogolubov and Rabbi Kaminetsky who helped spearhead the project will greet the guests and cut the ribbon.

This event follows the recent dedication of a new mikvah in Dniprodzerzhinsk, which along with the new JCC, received support from the Rohr Family Foundation.

With an Ohr Avner Jewish School where some 150 Jewish children are enrolled, Dniprodzerzhinsk's Jewish population now enjoys the opportunity for full participation in an active Jewish, communal life.