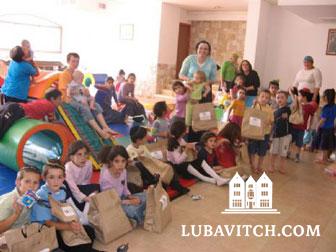 After Prime Minister Olmert learned that the Iron Dome system which was supposed to protect Sderot residents from Qassams, would be ineffective, he finally agreed to fortify Sderot homes. Yet a day later, the decision to do so was revoked. It is, says a February 22 report in Haaretz, "just the latest chapter in a gloomy saga replete with deception, lies, concealment of the truth from policymakers, groundless promises to Sderot residents . . ."

Adding insult to injury, Sderot residents say the international community has shown precious little solidarity with them as they are daily terrorized by Qassam rockets. And when the media does break a story about the rockets that kill and maim and destroy, it qualifies Qassams as “inaccurate” and “crude,” as if that somehow mitigates the tragedy of the lives destroyed by missiles fired with intent to kill.

Some days, the rockets come raining down steadily, others less so. Always, they are terrifying.

“There is no typical day here in Sderot,” says Mrs. Tzivia Pizem, Chabad representative and Sderot resident. “Some are quiet, while on others, the Qassams start at three in the morning and continue falling throughout the day.” No one knows where they will land, and when they don't kill, they instill a fear akin to death.

When Tzivia and her husband, Rabbi Chananel joined his brother and his wife, Rabbi Zev and Sima Pizem in the northern Negev town of Sderot eight years ago, the situation was relatively calm. Within six months, though, Qassam rockets (homemade missiles) were lobbed from Gaza, a kilometer away. At the time they fell once every two or three months.

Today the situation is dire. Since the Israeli government withdrew from Gaza in the summer of 2005, the missiles have been falling fast and furious. A “typical” day here can include 40 missile launches against the small city. On Thursday, February 21, three missiles fell in the south of Israel. Two hit Sderot.

Residents are warned of an impending missile with the chilling “Tzeva Adom” or Red Alert system. Within half a minute the Qassam falls. The Committee for a Secure Sderot informs residents of the dangers:

“Those who are not in a protected place during a rocket attack are exposed to injury from a direct hit, as well as injury from the shockwave of the explosives in the rocket, and from shrapnel which in itself is very dangerous.” Locals are told to seek indoor shelter, preferably in a designated bomb shelter or safe room.

“You have no idea what people have learned to do in 20 seconds,” says Pizem. Her five boys instinctively know to run indoors and seek cover when the siren blasts. “Just like kids in New York know to don hats and boots during a snowstorm,” Pizem elaborates, “they know that when you hear a missile, you go inside.”

While Pizem maintains that her children have become accustomed to the situation, others are not so lucky. The recent missile that seriously injured two young brothers (costing one of them a leg) fell less than half a block from her home. This constant state of unknown costs battered residents peace of mind, and often, their sanity. Many children are “trauma victims.”

With a shattered existence in the place of childhood, they are now afraid to shower, go to sleep, or play alone. It is not only children with these classic symptoms of PTSD—adults complain of heart failure, anxiety, and general health problems.

Protestors are taking to the populated central Israeli cities of Jerusalem and Tel Aviv. Irate residents object to the lack of protection the city is afforded from the military, and the dearth of basic shielding rooms, a necessity in this battle zone. The government refuses to spend the requisite 350 million NIS to protect its residents, while a new ornamental bridge, price tag 250 million NIS, was recently erected in Jerusalem.

Since 2001, this tired town has been hit by 7,000 rockets. Sderot residents say indifference to their plight begins with the Israeli government, and extends to international media. While Hamas militants are not coy about their goal to kill as many Jews as possible, the world remains silent, say Sderot residents, but cries “foul” against any Israeli action designed to protect its own citizens.

The two Pizem brothers are fighting back in their own way, working to alleviate the suffering that surrounds them. They provide counseling and visits to traumatized neighbors, as well as food and clothing packages. Their protected shul continues to function as normally as possible, offering a safe haven for prayer and comfort.

Recently a concerned friend, Rafael Rabinovich, started a Facebook page titled, “Chabad Sderot Relief Fund.” Moneys donated go directly to American Friends of Chabad of Sderot, which has become a steady anchor in a town whose citizens have had the ground knocked out, literally, from under their feet.

The Facebook website is one way that concerned friends can donate. Another is through www.helpsderot.com. Israeli and international schools have partnered with Chabad of Sderot to provide candies, toys, and necessities for local children.

On a personal level, Pizem says that they really appreciate visitors. “They give us a boost of encouragement. We used to have lots of company for Shabbos and now people are shying away.”

Despite the threats, the Pizems still encourage guests. When people cannot come, for the Pizems, and the 20,000 other residents, the most important message to hear is, “We’re with you.”

Tax-deductible donations can be sent to:
American Friends of Chabad of Sderot
512 Montgomery Street
Brooklyn, NY 11225